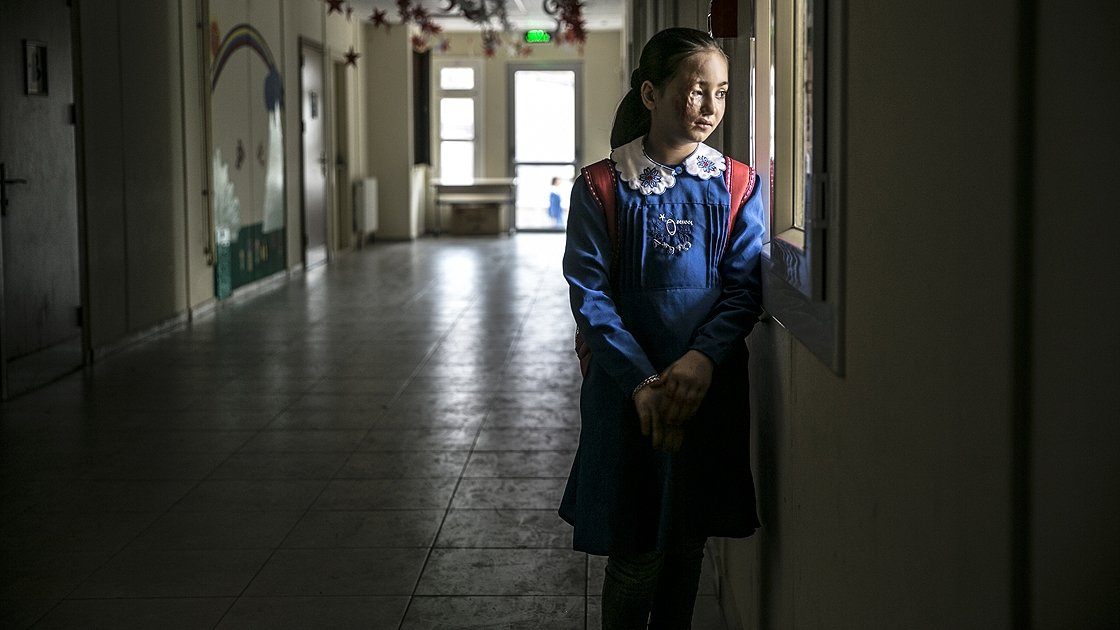 Luceyn Kifretune, a girl whose face was injured in an Assad regime attack in Syria, looks out of a window at her school, in Hatay, southern Turkey, Oct. 21, 2019. (AA PHOTO)
by Daily Sabah with Agencies May 03, 2021 12:45 pm
RECOMMENDED

Turkey continues to extend a helping hand to Syrian children who have become accustomed to the brutal face of war at an early age. Southern neighbor to the conflict-ridden country, Hatay, a province on the border, hosts a large number of child patients from Syria. Since May 2020 alone, 2,282 children in the newborn to four-year-old bracket received treatment at hospitals in Hatay, Ihlas News Agency (IHA) reported on Monday.

Most were injured in attacks by forces loyal to the Assad regime. Years of war demolished Syria's hospitals and crippled its health care services, which is why Turkish hospitals are the nearest option for Syrians in need of medical assistance. After receiving initial treatment in Syria, children, from different parts of the country, are rushed to Hatay in ambulances or private vehicles through the Cilvegözü border crossing.

Some of those injured suffered severe burns, something the surviving clinics and hospitals in Syria cannot treat due to a lack of medical equipment and staff. A total of 167 children have received treatment for burns since May 2020. Children maimed in attacks are also first sent to the province before usually being transferred to hospitals in other cities for prosthetic transplants.

The Assad regime launched nearly 82,000 barrel bombs over nine years of attacks on civilian settlements under the control of the opposition in different parts of Syria, according to the Syrian Network for Human Rights monitoring group. The group's report, published earlier this month, puts the civilian death toll at 11,087, including 1,821 children and 1,780 women. Since 2012, the regime has used barrel bombs filled with poisonous gas in 93 attacks. The provinces most targeted were Damascus, Aleppo, Daraa and Idlib, with the most casualties reported in Aleppo. Syria has been embroiled in a vicious civil war since early 2011 when the Assad regime cracked down on pro-democracy protests with unexpected ferocity. Hundreds of thousands of people have been killed and more than 10 million displaced, according to U.N. estimates.