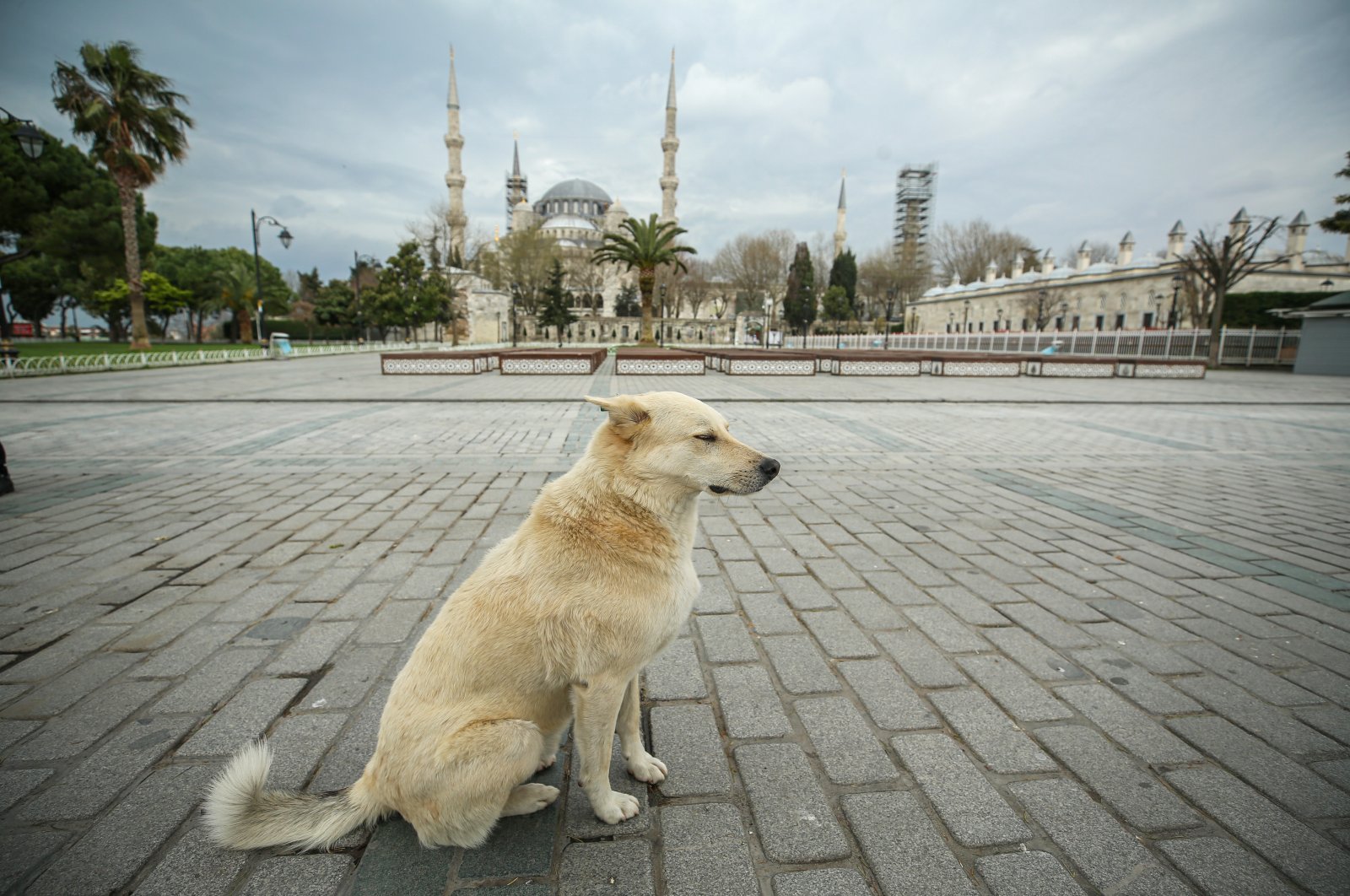 Coronavirus cases are still expected to peak in late April, but a member of Turkey’s task force against the deadly outbreak expresses hope for a return to normal next month if the nation heeds safety measures

Turkey is still in the critical weeks of the COVID-19 outbreak but the situation is not as grim as expected. Indeed, Professor İlhami Çelik says life will likely return to normal by the end of Ramadan, which is a month of fasting for Muslims that will start in late April.

According to Çelik, a member of the Health Ministry’s Coronavirus Science Board, the silver lining is the likelihood of a downward trend in infections after it peaks in the third week of April. Speaking to the Turkish language daily, Sabah, he said the higher the public compliance with the board’s measures, the earlier normalization will return to Turkey.

Turkey's daily coronavirus test numbers have reached 20,000 as the death toll rose to 574 after 73 people died from COVID-19 in the past 24 hours, Health Minister Fahrettin Koca announced Sunday evening.

Some 20,065 tests were conducted on Sunday, and the number of overall tests carried out so far reached 181,445.

The total number of confirmed coronavirus cases surged to 27,069 as 3,135 more people tested positive for the virus, according to data shared by the minister on Twitter.

So far, 1,042 patients have recovered and been discharged from hospitals, while 1,381 patients are currently receiving intensive care, the data shows.

On a positive note, the rate of the increase in coronavirus infections of those tested has fallen to the lowest level of April, according to official data. The rate was announced as 25% on March 31, 15.9% on April 1, 15.7% on April 2, 15.4% on April 3, 14.4% on April 4 and 13.1% on April 5, offering a glimmer of hope for tens of millions of people around the country awaiting positive news as they stay inside and follow the advice of the Health Ministry and other officials.

Çelik says the number of cases and rise in infections are completely normal based on their projections. “The Coronavirus Science Board’s purpose is to spread out the pandemic’s peak period and relieve the burden on the health care sector. We don’t currently see an extra burden on hospitals and the death rate is relatively low. We don’t see an extreme surge or drop in cases and hospitals can cope with new infections, even if they dramatically rise. Our hospitals can handle 20 times more cases."

The death toll and infections are lower in comparison to Europe, which Turkey has repeatedly accused of showing a slow response to the outbreak. Çelik says Turkey would face similar consequences to those in Europe, where thousands have died so far if it did not take the matter seriously at its start.

April’s first two weeks are critical to minimizing the trend in cases, but Çelik says there are still a few weeks ahead that will determine the course of the outbreak. “We have to act carefully in these weeks, to exert maximum effort to prevent the virus from spreading. It is important to comply with all of our safety measures. If we don’t, COVID-19 will linger in Turkey and hospitals will be overwhelmed,” he says.

Çelik says people have to comply with government measures in addition to imposing their own, referring to the Health Minister’s oft-repeated statement about each citizen needing to create their own quarantine against the pandemic. “If we do this and if temperatures rise, I believe life will return to normal in time for Ramadan Bayram. I am hopeful. Turkey and the world overcame worse pandemics. If humanity defeated other pandemics in the past, there is no reason that it cannot defeat this one,” he says.

The absence of a vaccine for the new coronavirus remains a concern, but Çelik says the impact of this virus will decrease even if there is no vaccine available yet. “The more people are subject to a virus, the less its impact will be. The majority of people will likely be infected, recover and develop immunity. Genetic and climate conditions are key. I believe the pandemic will not be as widespread as it is now with the change of climate. Figures show that most cases in warmer regions are those brought by people not living there. Heading into summer, the impact of the virus will be lessened for Turkey,” he says.

He says Turkey is trying to develop both a vaccine and successful treatment, pointing to the Turkish Red Crescent’s efforts in taking antibodies from recovered patients and transferring them to new patients. “We will see whether it will work,” he says while underlining potential obstacles in fighting the outbreak. “We see some countries using medicines for other diseases in the fight against virus and this only hampers the fight. They try anti-viral drugs, like malaria drugs. We see medicine normally used for treating influenza used for COVID-19 treatment, but we don’t have sufficient data. It is safe to say that these drugs would cause side effects while trying to treat people,” Çelik noted.

Turkey has increased its measures to curb the spread of the virus including a 24-hour curfew for people under the age of 20. A similar quarantine for people above the age of 65 had previously been put into effect.

People are barred from leaving cities in 31 of the country's 81 provinces. Istanbul, Ankara and İzmir, the country's most populated provinces, are included in this quarantine.

Nationwide measures are added almost daily, while municipalities are taking their own additional precautions as well.

A survey, whose results were announced Monday, points out that senior citizens and young people equally are afraid enough of the new coronavirus to comply with restrictions, while only 1% interviewed are continuing their daily life as before the outbreak.

Engin Deniz, deputy manager of the Turkish Psychological Consultation Association, joined three academics for the survey on people’s views of the outbreak. Some 1,304 individuals in Turkey’s 75 provinces were interviewed for the project. Deniz says they connected with people between the ages of 18 and 64 to measure the level of fear in the public and saw rising levels of depression, concern and stress.

“People thinking about the virus more have less life satisfaction and women are more afraid of the virus compared to men. Age is not a factor in determining the level of fear, as people of all ages expressed the same amount of fear,” he told Anadolu Agency (AA). The majority of interviewees say they never leave home unless necessary. “20% of interviewees never set foot outside at all during the lockdown, but a 1% still go out occasionally and do not think it is necessary to be confined at home,” he says.

“People are fighting a state of uncertainty now and, normally, it instills fear in people. They have to continue their daily routine, though with some concessions, to overcome this period without succumbing to depression. You can change your clothes like you are going out, you can do house repairs you postponed before and stay online to keep in touch with your loved ones,” he says.

According to Community Mobility Reports by Google, Turkey saw the number of people on the streets thinning after the outbreak. The report for March shows that movement to retail and recreational areas has plunged 75%. This category includes places such as restaurants, cafes, shopping centers, theme parks, museums, libraries and movie theaters.

Grocery and pharmacy movement fell 39%, while visits to parks decreased by 58%. The use of transit stations plummeted 71% as trips to workplaces went down by 45%. Meanwhile, the residential population, unsurprisingly, increased by 17%. The analysis of location data from billions of Google users' phones is the largest public data set available to help health authorities assess if people are abiding with shelter-in-place and similar orders issued across the world The company released reports for 131 countries.