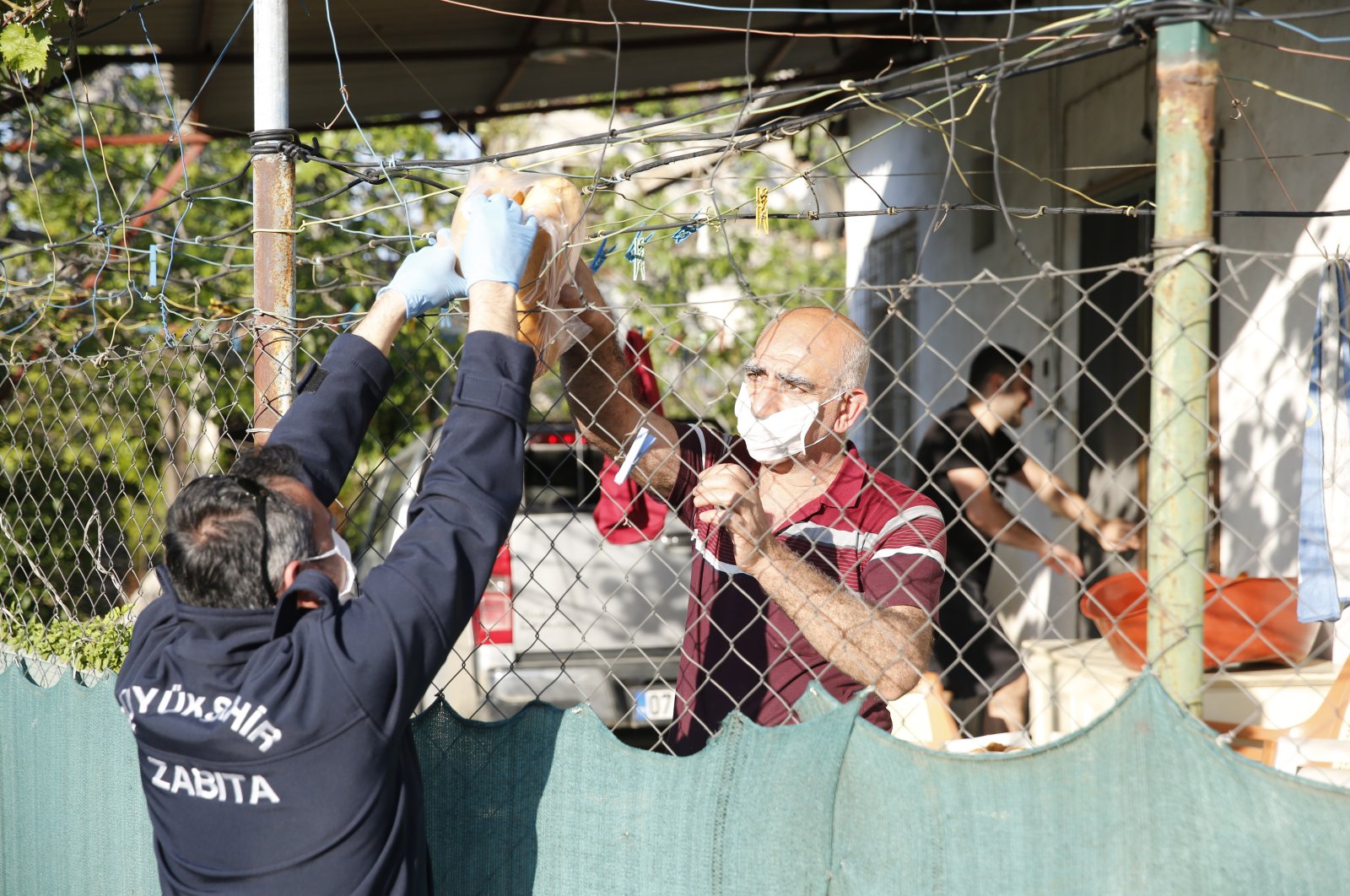 A municipality worker delivers bread to a house in Antalya, Turkey, Sunday, April 12, 2020. Some municipalities delivered free loaves of bread in cities with curfew. (İHA Photo)
by DAILY SABAH WITH AGENCIES Apr 12, 2020 2:23 pm

A surprise curfew declared for the weekend across 31 cities ended at midnight. The lockdown put in place to counter the public’s unbridled enthusiasm for weekend outings despite the COVID-19 crisis was deemed largely successful

Turkey has been struggling to reinstate daily life amid the country's ongoing COVID-19 pandemic. Though an early response to the crisis has stemmed the number of those afflicted, the country has had mixed success in limiting public mobility, especially on weekends and given rising temperatures. With this in mind, a weekend curfew declared in over 31 mainly urban provinces was no surprise for some, despite it having been announced some two hours before implementation.

Streets, avenues and main squares across the country have been void of all signs of life in the wake of the curfew imposed in metropolitan areas by the Interior Ministry on Friday night.

While a number of citizens immediately went to form lines in front of the bakeries and grocery shops to stock up on essential goods in Turkey’s commercial capital Istanbul following the announcement that evening, most had returned to their homes by midnight, when the curfew took effect. In some areas, the police had to ask residents to return to their homes, allowing for calm to descend on the streets.

The curfew focused on preventing people from gathering for picnics or walking along promenades in light of the improving spring weather. Parks and other public spaces have seen rising numbers of crowds in past weeks, to the chagrin of authorities looking to boost social distancing and promote a stay-at-home campaign. Indeed, except for police officers, bakery employees, commuting health care staff and those in professions deemed critical who are excluded from curfew, activity has come to a halt in most cities. All central squares and streets in urban areas have been deserted throughout the weekend, reminding many of census days, when similar curfews have been imposed in the past.

Police officers patrolled the streets to give stark warnings to those violating the curfew, occasionally imposing fines when necessary. The Interior Ministry announced on Sunday that 18,770 people had been fined in total. The ministry’s statement said some 63.6 million people across 31 cities had largely complied with the curfew and thanked the public for their “sensitive approach to the measures.”

Turkey already had a curfew in place for those above the age of 65 and those under 20, yet stopped short of a full lockdown. The government has, until now, relied on the public’s compliance with calls for self-isolation. Authorities have called on people repeatedly to impose their own quarantine or lockdown.

Turkey was one of the first countries to take measures against the coronavirus, closing its border with Iran and halting flights from China and Italy. It has since shut down all international arrivals, restricted domestic flights and set up road checkpoints outside cities to prevent unessential travel.

Authorities have closed schools, cafes, nightclubs and barber shops, and canceled sports events and prayers at mosques. The government has banned anyone 65 or older – who constitute those most vulnerable to the disease – from leaving their homes, later extending the ban to people under 20 after it appeared that many young people, falsely believing they were safe from the virus, continued to socialize.

At least 156 towns or villages have been placed under quarantine, with residents unable to leave their homes. Face masks are now compulsory in public places such as supermarkets, and the government is distributing them free of charge.

The total number of coronavirus cases in Turkey exceeded 50,000 on Saturday, the Health Ministry said. The COVID-19 caseload surged by record 5,138 in a day, reaching 52,167.

"Our number of cases is increasing predictably with the increase in the number of tests. The same increase has not occurred in the number of those in intensive care. We are faster in diagnosis, so treatment can begin early. Turkey has shown considerable success in treatment," Health Minister Fahrettin Koca said on Twitter.

The strong measures Turkey has taken to prevent the spread of the novel coronavirus outbreak, as well as its solid public health system and generous social assistance schemes, have made the country a model for many others in the fight against the deadly virus.

As the virus began spreading rapidly around the globe, countries reacted to the threat by announcing a series of countermeasures, accompanied by social restrictions in varying degrees. Turkey began taking such measures promptly with effective cooperation from all relevant public and private institutions to prevent the outbreak from entering and spreading in the country.

One of the most effective assets in the fight against the outbreak Turkey has at its disposal has been the country's large number of hospitals and intensive care units.

The country was also quick to announce economic support packages to avoid disruption in production, giving away free masks for protection, making monthly pension payments to the elderly at their homes and sheltering the homeless, which set an example to the entire world.

Turkey airlifted 42 people from Wuhan, including 32 Turks, 6 Azerbaijanis, 3 Georgians and one Albanian, to Ankara on Feb. 1 aboard an A400M cargo plane belonging to the Turkish Armed Forces. Turkey also brought back nationals from European countries and other parts of the world. They were sent home after a 14-day quarantine procedure was completed at public dormitories.

Turkey has continuously updated its measures in line with the recommendations of the Coronavirus Science Board of the Ministry of Health, which was established right after the outbreak began to spread in different parts of the world. The Ministry of Health established field hospitals at border gates to prevent the entry of the virus as Turkish nationals were kept under observation in those field hospitals upon arrival.

Following the first confirmed COVID-19 case on March 11, Turkey began implementing new measures, suspending education in primary, secondary and high schools as well as at universities on March 16 and started offering homeschooling via the internet and television.

Public places such as cafes, shopping centers and entertainment venues were shut down. As part of the measures, public officials were banned from abroad and public events such as conferences, panels, exhibitions, meetings, workshops and conventions were canceled.

Upon the orders of the Ministry of Environment and Urban Planning, sanitation teams began frequent disinfection of public places, buildings and public transport vehicles. The Directorate of Religious Affairs has moved to suspend prayers in congregations at mosques, including the Friday prayer.

The number of COVID-19 tests Turkey ran daily quickly surpassed 20,000 and the country has imported nearly 1 million boxes of a promising drug used as part of the treatment protocol of the disease.

Developers successfully completed works to design a mobile phone application to trace patients who have recovered from the disease during the home-isolation period.

While Turkey declared a partial curfew for senior citizens aged 65 and over, the Interior Ministry also set up "Vefa Social Support Group" in provinces and districts charged with helping those most in need, particularly those who live alone or with chronic ailments.

Vefa Social Support Group have reached more than 1.5 million senior citizens to meet their needs under the lockdown.

The government has announced a TL 1,000 (around $149) stipend for families in need, handing out the sum to 2 million households. The aid in cash has been delivered directly to the houses of needy to make sure that social distancing measures are observed. The government has also announced it will provide 2.3 million more households with the TL 1,000 financial aid.

The government has also doubled funds to cover intensive care unit treatment costs, paying hospitals an extra TL 660 per day for each patient diagnosed with the coronavirus.

The government has launched a scheme to provide accommodation for the homeless in all 81 provinces of the country in public guesthouses or private hostels and hotels and meet their basic needs such as food, cleaning, clothing and others until the threat of the epidemic is eliminated.

Turkish President Recep Tayyip Erdoğan also launched a donation campaign to support the needy as part of a drive has raised me 1.54 billion Turkish liras so far.

Turkey has made the wearing of face masks in public places, such as bazaars and shops, mandatory and began distributing protective masks.

Robots to aid in the fight

Turkey’s prestigious Middle Eastern Technical University (ODTÜ), in the capital Ankara, has made an innovative contribution to the country’s fight against the COVID-19 outbreak. The university has announced the development of a special search engine for studies on the virus and a robot to reinforce social distancing measures.

Professor Mustafa Verşan Kök, president of the university, says that scientists working for the university's Application and Research Center for Space and Accelerating Technologies (İVME-R) have produced a robot that helps safely disinfect areas in cooperation with a defense company. The remote-controlled robot, which can climb upstairs and has a disinfectant tank capacity of 5 liters, has a 180-degree spraying mechanism. It is also fitted with ultraviolet lamps that can work uninterrupted for eight hours and can eliminate viruses and other microorganisms.

Meanwhile, the CARNAP search engine, produced by scientists from the university's Funktor team, offers a more efficient way for researchers to access thousands of articles and data items on scientific studies. Kök told Anadolu Agency (AA) on Sunday that the engine has been open to users for a week and had been employed by thousands of researchers from Turkey and from around the world.

The search engine works on Medline, a massive source of information for medical researchers with more than 30 million articles and the addition of at least one article every 10 seconds. “Classic search engines are not sufficient for fast access to this amount of information. New algorithms developed by our scientists facilitates search, especially in an extraordinary period where researchers race against time to find a solution to the outbreak,” he said.