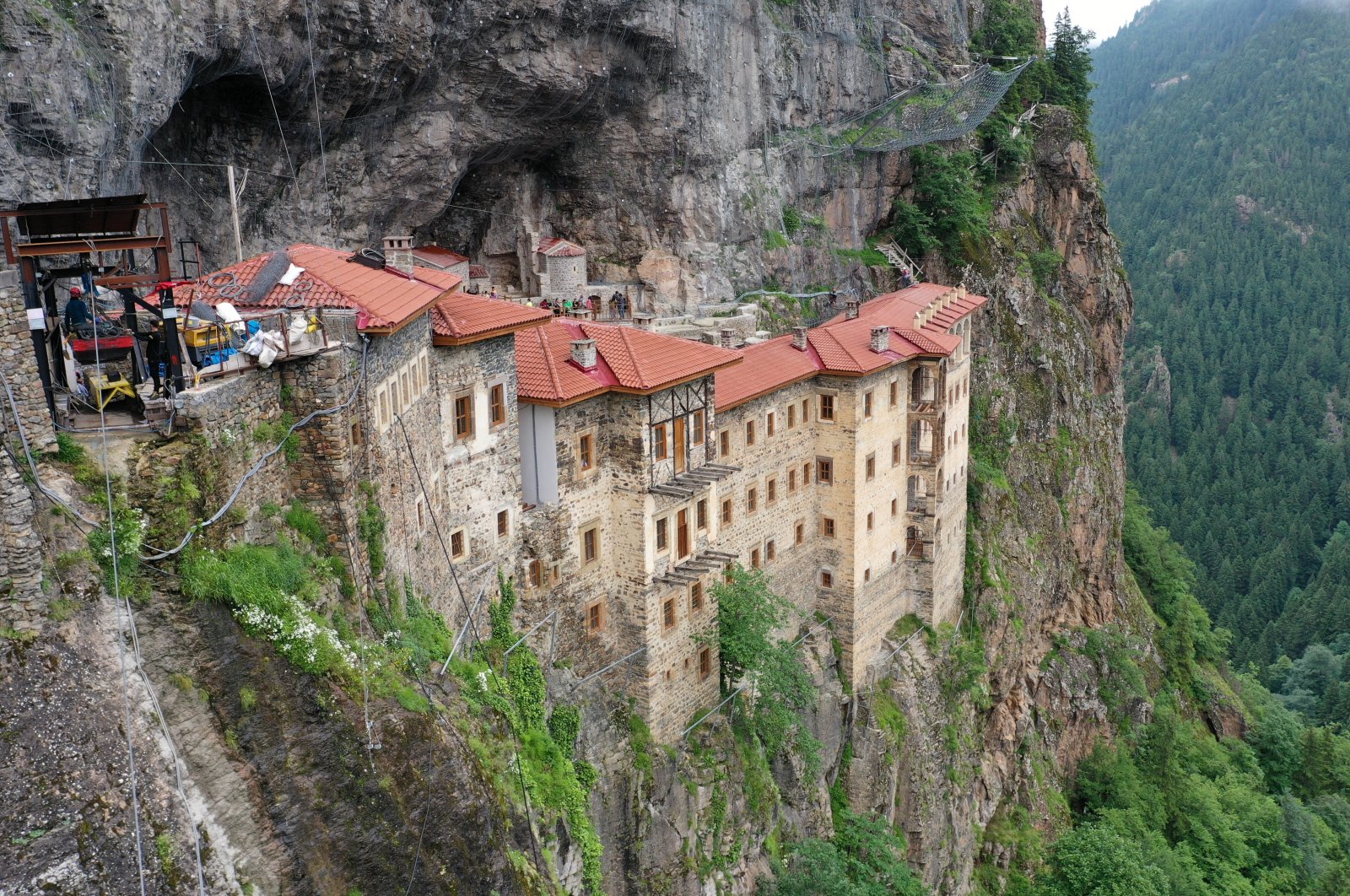 Sümela, a mountainside monastery in northern Turkey, has returned to its crowded days after reopening following restoration, welcoming visitors from around Turkey and the world

Sümela is a unique place in Turkey’s Black Sea region. The monastery offers visitors the opportunity to admire the well-preserved history of Christianity against a lush backdrop while experiencing the thrill of mountain climbing.

Reopened in May after restoration, the ancient structure carved into a cliffside of Karadağ (Black Mountain), has seen a revived interest in its beauty and has boosted the number of visitors to Trabzon, the province where it is located which is famous for its highlands.

The monastery was briefly opened in July 2021 after restoration but due to the danger posed by rocks dangling above it, the site was closed between November 2021 and May 2022. Official figures show more than 150,000 people visited it between July and November 2021 while another 67,752 people visited between May 1 and June 27, 2022. Before the monastery went under restoration, it hosted almost 500,000 guests annually including 100,000 international tourists.

The monastery is a site of unique historical and cultural significance and a major tourist attraction. It was included on UNESCO's temporary list of World Heritage sites in 2000.

Dedicated to the Virgin Mary, the Orthodox monastery is surrounded by a dense forest and sits 300 meters (984 feet) above the Altındere Valley. The exact date of its construction is not known but several studies point to it being founded by monks from Athens sometime around 386 A.D., during the reign of Roman Emperor Theodosius I.

It underwent restoration several times during its long history and was enlarged during the reign of Byzantine Emperor Justinian the Great. Sultan Mehmed II, also known as Mehmed the Conqueror for putting an end to Byzantine rule by conquering Istanbul, granted the monastery an exclusive status after Trabzon was conquered by the Ottomans in 1461. The status and rights given to the monastery ensured the religious freedom of the faithful in the region. After a population exchange between Turkey and Greece following the Turkish War of Independence, the monastery was largely abandoned as the Orthodox Christian population in the region dwindled. In 2010, authorities granted permits to the Fener Greek Orthodox Patriarchate to hold religious services in the monastery, which mainly served as a tourist attraction for years.

In the 18th century, a large part of the building was renovated and some of its walls were decorated with frescos. A century later, the monastery was renovated again giving it an impressive appearance with the addition of new sections. It has been extremely important throughout history and attracted scores of tourists and wanderers who mentioned the monastery in their journals.

The main sections of the monastery complex include a library, kitchen, student rooms, several chapels, a guest house, a holy spring and the rock church. The Sümela Monastery was built over a large area with an aqueduct built against the cliff at the entrance that provided water to the buildings.

The entrance with its guardrooms leads to a long stairway and another stairway leads to the inner courtyard, on the left of which, in front of a cave, are several more monastery buildings. The cave, which was converted into a church, is the center of the monastery. The library is on the right side and the large building with a balcony on the front part of the cliff was allocated for monks and guests. The frescoes of the chapel date back to the 18th century and were painted on three levels in different periods. The frescoes at the bottom look better than others and a significant part of them was ripped off and damaged. The images on the frescos feature biblical scenes about Jesus and the Virgin Mary.

Nowadays, the monastery also attracts visitors who enjoy trekking across rough but spectacular green terrain, as well as mountain bikers. For those exhausted by the long climb, Aya Varvara, a historic church on the pathway to Sümela, also offers a whiff of history and breathtaking scenery.

Filiz Ipek, who came from the western city of Izmir to visit the monastery, says the place is “superb.” Ipek decided to visit Sümela after watching a comedy film where the monastery was used as a main location. “I still cannot comprehend how people built the monastery on such a steep place,” she told Anadolu Agency (AA) on Friday. Tour guide Şaban Avcı, who accompanied a group of tourists to the monastery, said the nature around the monastery is also beautiful. “It hosts a diverse array of trees and when the fog sets in, it gives the place a different air,” he says.