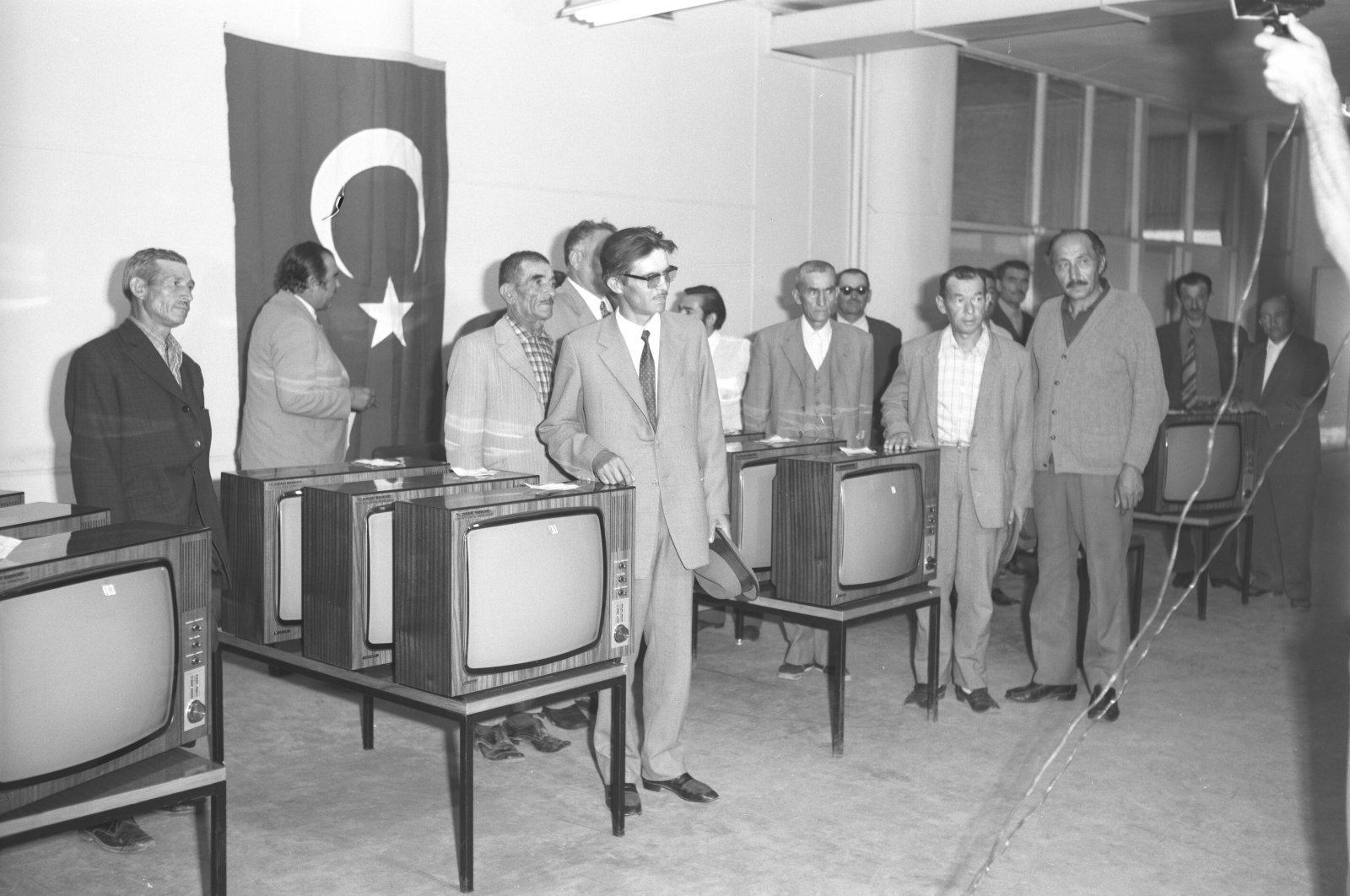 TV sets are gifted by TRT officials to villagers as part of the public broadcaster's campaign to distribute televisions to people living in Turkey's rural areas, Turkey, Aug. 22, 1972. (AA Photo)
by Anadolu Agency May 02, 2021 1:06 pm
RECOMMENDED

The Turkish Radio and Television Corporation (TRT), which has broadcast many historical events to the public since its foundation over half a century ago, marked its 57th foundation anniversary Saturday.

TRT was established May 1, 1964, to broadcast on radio and TV on behalf of the Turkish state.

Today, the public broadcaster, whose autonomy and impartiality is enshrined in the Constitution, serves not only Turkey but the entire world.

The global network is on the air in Turkey and the rest of the world with its 17 TV channels, 16 radio stations, its trt.net.tr website and trtvotworld.com website in 41 languages, including TRT World and TRT Deutsch, and five printed journals.

Ibrahim Eren, chairperson and director-general of TRT, said in an interview with Anadolu Agency (AA) that TRT manifested the visual and auditory memory of Turkey, endeavoring to reach everyone in the country with its understanding of public broadcasting and always keeping the bar high as a school of broadcasting in the nation.

He stressed that TRT is an organization that "competes with itself only."

"With the first radio broadcast May 6, 1927, and the first television broadcast Jan. 31, 1968, TRT has always achieved success by drawing a path that competes with itself, with nearly a century of experience," he said.

Eren underlined that they were now working to make TRT a worldwide broadcaster.

"While maintaining the core values of TRT dating back to nearly 100 years, we're updating it to meet today's media needs," he added.

Eren said TRT would air internationally impactful productions in the coming period, such as a series on the adventures of Oruç Reis on the high seas and productions that depict the life of Mevlana Jalaladdin Rumi, a 13th-century Sufi mystic, poet and Islamic scholar commonly known as Rumi in the West.

He went on to say that TRT Balkans would also start broadcasting within a short time.

"Our next step will be our French news platform, and we'll continue to reach the world with our new news platforms that we'll establish in other languages," he added.

Voice of the nation

Marking the 57th foundation anniversary of TRT, Presidential Communications Director Fahrettin Altun sent a congratulatory message to Eren, noting that TRT, which increases the diversity and quality of its broadcasting day by day without compromising its fundamental broadcasting principles and the values ​​of the nation, puts its signature on publications that draw attention with the human-centric approach.

Altun emphasized that TRT, which has pioneered innovations in the media sector in terms of both infrastructure and content, continues to be a school in the field of broadcasting.

"While TRT reinforces its success in reliable reporting with culture, arts, sports, education and children's channels, it also tells the world about the power of our country and makes the voice of our nation heard through international broadcasts in different languages," he said.

Altun underlined that they are also pleased with the intense interest in TRT's quality productions – in which nations' historical, cultural and human values are reflected in a just manner – showed by both the Turkish nation and countries from all over the world, including those in Europe, Asia, the Balkans and Africa.

"I believe that the TRT will implement innovative and powerful projects from now on, in line with the call of our president for 'communication mobilization' for truth in every platform," he said.

The Directorate of Communications will continue to support TRT "with all our means," Altun said, adding that he believes the TRT will become a world brand with its investments in line with its vision of global impact and digitalization.