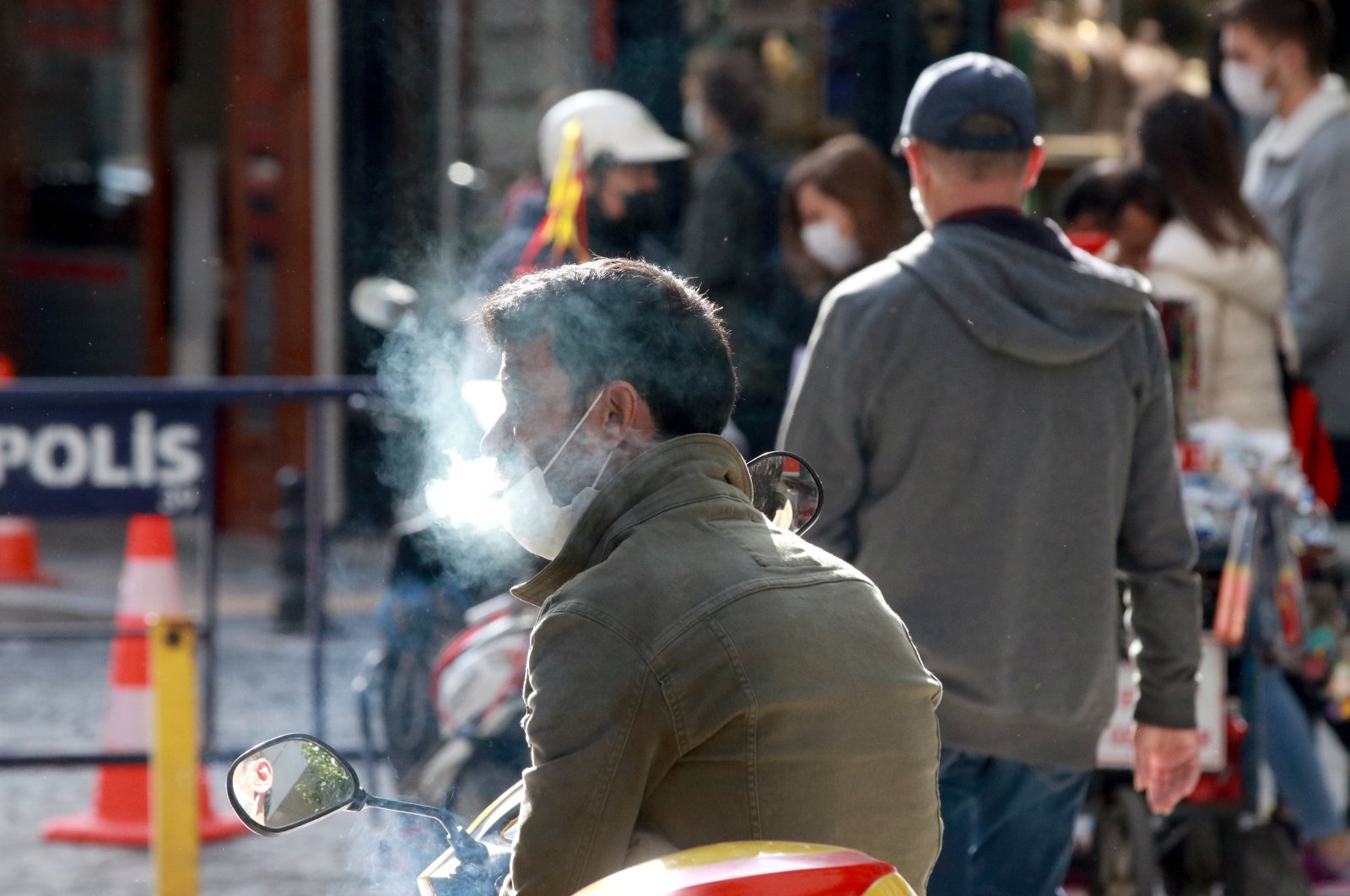 With a rapid surge in the number of COVID-19 patients, Turkey has recently implemented a series of measures to stem the spread of the virus, including a nationwide smoking ban in public spaces. World Health Organization (WHO) experts and the president of the anti-addiction group, the Turkish Green Crescent, welcomed the ban but warned smokers about the likelihood of experiencing more severe symptoms from the deadly virus compared with nonsmokers.

In a circular to governors in the nation's 81 provinces, the Interior Ministry announced on Nov. 11 that a smoking ban would be introduced in "areas like avenues, streets and stops where citizens gather in crowds."

The head of WHO's European Centre for Preparedness for Humanitarian and Health Emergencies, Irshad Ali Shaikh, said the "action is unpopular, but inaction is deadly." The doctor told Anadolu Agency (AA) that "it is only prudent to look at those factors” that may potentially slow the pace of virus spread.

With masks, personal hygiene and social distancing already implemented globally and in Turkey, Shaikh said experts are now “looking at any plausible factor that may contribute to further spread.” While explaining that the research on smoking and COVID-19 relation is ongoing, he said virus particles may travel further through air exhaled by smokers.
He cited a case in the U.S. where a member of a choir in early March unknowingly infected more than 55 people from the group. He said the “laws of physics” could explain the super spread at the choir practice. Similar to the choir incident, smokers exhale with extra force compared with regular breathing.
“Thus, looking at physics, you’d assume that when smokers exhale, the (virus) particles/droplets will come out and with any additional force, they would travel much more than normal breathing,” he said. He noted there is “an etiological and physiological pathway connecting smoking with many respiratory viruses in the past.” Stressing that doctors have seen double the numbers of flu and Middle East Respiratory Syndrome (MERS), a viral respiratory illness, in smokers, Shaikh said the process affects the immune capacity in lung tissue. Underscoring that research on the general population is accumulating, he said evidence by the WHO suggests in hospitalized COVID-19 patients “smokers are more likely to get a severe disease and even the probability of dying was higher in smokers compared with nonsmokers.” He praised Turkey’s efforts in tackling the virus and said the country is “doing good in the population level.” With Turkish Health Minister Fahrettin Koca continuously calling on everyone to abide by measures and be responsible, Shaikh said, “Repeated and regular emphasis by ministers shows the leadership from the front.”
“The continuous emphasis by the health minister and the president talking about the precautionary measures shows you that they do not want us to let our guard down,” he said. “The virus is waiting for more opportunities to infect.” He applauded the level of public compliance for mask-wearing and said wearing masks at home even with close family members and having fresh air circulation at home will further minimize the spread of the virus, especially with the holiday season approaching in many parts of the world.
Echoing Shaikh, WHO Noncommunicable Diseases and Life-Course officer Toker Ergüder said, “When blowing cigarette smoke, your lungs blow with a little more pressure.” “In other words, due to that blowing, you can spread virus particles further from the required social distance of 1-2 meters (3-6 feet). Another person could be infected as soon as he detects this smoke,” he added.
SYMPTOMS MORE SEVERE
Reiterating that there is no concrete evidence for this theory, Ergüder said the smoking ban was “a sound decision” by Turkish officials. He said another reason why the ban is wise is due to people lowering their masks. “As those smokers constantly lower their masks under their chin. They are also infecting their masks too. They would be touching the cigarette pack, pull out their lighter if they have one or ask someone else and ultimately ruin the usability of the mask,” he said.
Ergüder said smokers experience COVID-19 symptoms 14 times more severe than those of nonsmokers, and secondhand smokers also experience damage to their lungs and suffer immune system deterioration. “A total of 8 million people each year die due to tobacco use. More than 7 million of those deaths are the result of direct tobacco use, while nearly 1.2 million are the result of being exposed to secondhand smoke,” he said. With COVID-19 measures, Ergüder said people who wear masks throughout the day would be exposed to less tobacco and perhaps even quit smoking and stressed it is important to inspect measures as much as enforcing them. Mücahit Öztürk, president of Turkish Green Crescent (Yeşilay), a non-profit organization which focuses on fight against addictions, also told AA that the smoking ban is “a sound decision” and underscored the risks of secondhand smoke. “At this point, every decision made and every step taken to combat the virus is very important. Decisions that would reduce the risk of contamination should also be adopted by citizens, and everyone should do their part in this struggle,” he said. While the ban could potentially strengthen awareness about the dangers of tobacco use, Öztürk believes such a move could also “motivate” people to quit smoking.
Analogously to Shaikh and Ergüder, the head of the Turkish Green Crescent said, “Smoking and the coronavirus are linked in terms of both affecting the spread of the virus and causing difficulty in the treatment process.” With smokers letting their guards down by lowering their masks, Öztürk said such action also prevents the proper use of masks. “While tobacco and tobacco products adversely affect general health and the functions of all our organs, tobacco smoke suppresses the immune system and impairs its function,” he said. “In addition, smoke blocks the cough reflex in the lungs, making it easier for viruses and bacteria, which could cause serious infections, to remain in the respiratory tract and lungs,” Öztürk said.

According to recent research by the anti-addiction group, COVID-19 increased the motivation to quit smoking while one in every 10 people quit smoking due to the pandemic in the last six months. The study was conducted on approximately 2,500 people aged 15 and older from 26 provinces in Turkey. A total of 62% were men and 38% women. In the study, 95% were active smokers and 5% had quit.

“In a study conducted in 2017, the rate of those who wanted to quit smoking was about 37%, while in this study the rate had increased to 58%,” Öztürk said.
•Smoking rates are on the decline across Turkey, yet the deadly addiction still takes a heavy toll. The country spends a whopping $25 billion (TL 190.90 billion) annually on smoking, either in terms of the tobacco itself or treating the diseases it causes. According to the Fight Against Smoking Association, the public spends $15 billion per year on cigarettes, while the government spends $10 billion to treat smoking-related illnesses.

The country introduced a nationwide indoor smoking ban in 2009 at restaurants, bars and similar establishments and gradually extended its reach to other enclosed spaces over the years, in addition to a complete smoking ban on school grounds and the sale of tobacco products at educational facilities.

Meanwhile, Shaikh and Ergüder expect the virus to be with us until the second or third quarter of next year. Despite the number of candidate vaccines being introduced, Shaikh said, "Even when the vaccine does become available, there will be a serious shortfall between demand and supply.” But there is still light at the end of the tunnel, he said. "We may be tired of the virus, but it is not tired of infecting us.”