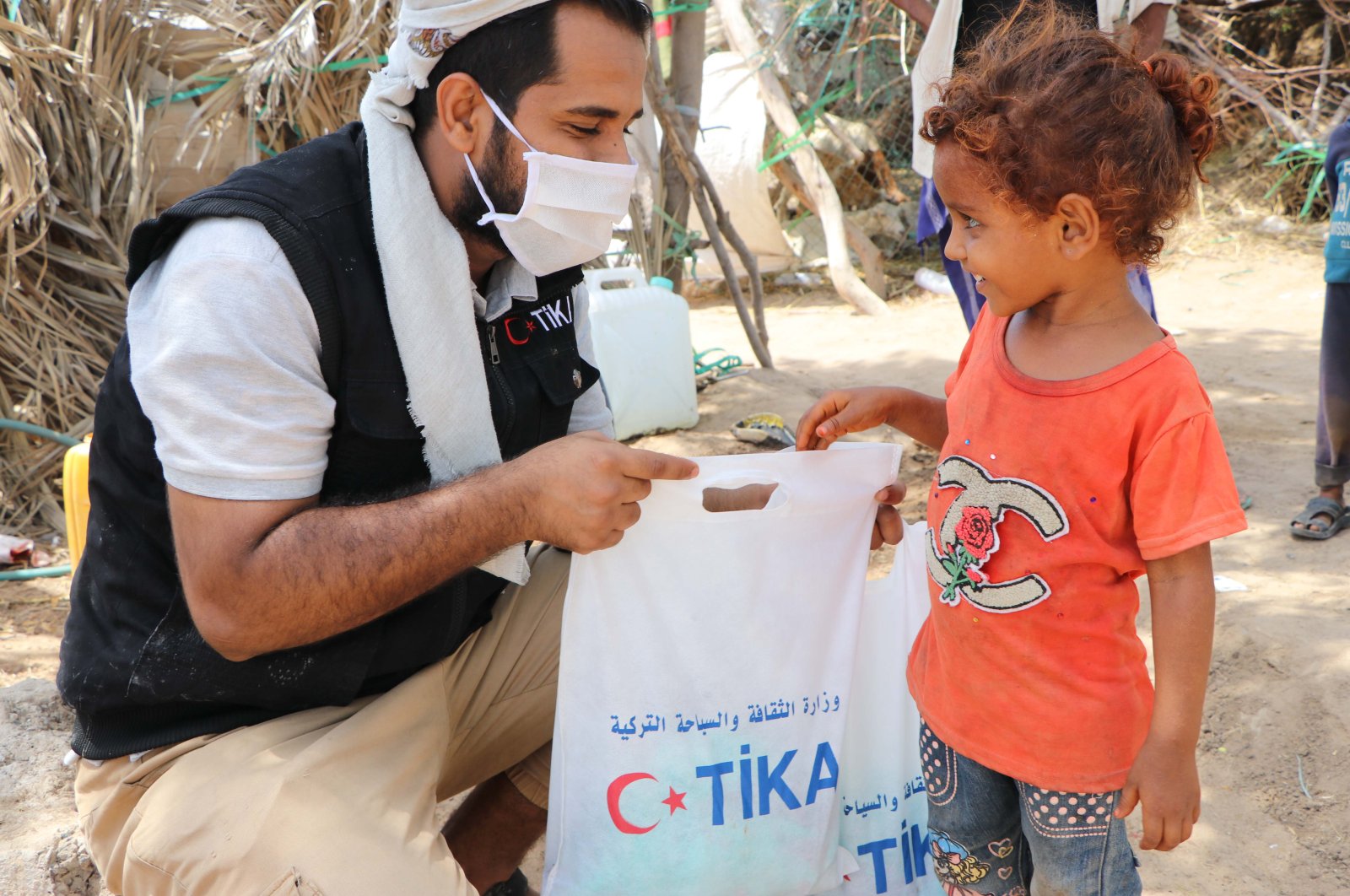 From Ethiopia to Colombia, the state-run agency distributed aid to more than half-a-million people across 66 countries during the Muslim holy month of Ramadan

Turkey's state-run Turkish Cooperation and Coordination Agency (TIKA) brought the joy of the Muslim holy month of Ramadan by delivering aid to around 700,000 people in 66 countries around the globe.

TIKA distributed more than 100,000 aid packages during the month, according to information obtained by Anadolu Agency correspondents.

Meanwhile, in its efforts to also deliver aid to people affected by the coronavirus pandemic in the Turkish Republic of Northern Cyprus during Ramadan, TIKA delivered approximately 25 tons of food to 1,000 needy families in the country's capital Nicosia (Lefkoşa) as well as Girne, Famagusta (Mağusa), Lefke and Güzelyurt provinces.

The packages included staple food products such as milk, tea, rice and coffee.

The aid agency provided relief to 700 families in the poorest regions of the Southern African country of Lesotho during Ramadan.

Amid the ongoing threat of the outbreak, TIKA distributed disinfectants, gloves and masks in Lesotho as part of Turkey's support to countries around the world to help them fight the COVID-19 pandemic.

In Somali, some 500 families who had to leave their homes behind in the capital Mogadishu to live in camps in the Garasbaaley region to the west received food packages including rice, flour, pasta, sugar and cooking oil in Ramadan.

In Ethiopia, 17 tons of food packages were delivered to more than 2,000 people living in camps that host displaced persons in the capital city of Addis Ababa and Sululta city in the Oromia region. During Ramadan, 50 tons of food aid was distributed to Ethiopians in need.

Abdella Siraj, a father of five and beneficiary of the project, said the food parcels distributed by TIKA helped them breathe a sigh of relief during the holy month.

Moreover, in the West African country of Guinea, the agency provided food aid to 1,000 needy families who were adversely affected by COVID-19.

The agency also distributed 34 tons of food to 2,000 needy families of Eritrean refugees at the Shagarab camp located in Kassala state in eastern Sudan.

As part of its support to the Palestinian people in their health and food needs during the month of Ramadan, TIKA, in cooperation with local institutions, distributed aid packages to 7,500 families in need in the Israeli-occupied West Bank and east Jerusalem.

The West Bank, including east Jerusalem, is regarded as occupied territory under international law, making all Jewish settlements there illegal.

In the first batch of its Ramadan aid distribution, which was carried out in cooperation with the Zakat Organization, which is in charge of collecting zakat donations, or mandatory alms, and the country's Social Development Ministry, food packages were delivered to 3,000 needy families in the West Bank.

In Gaza, the organization distributed food packages to 5,060 needy families.

Meanwhile, 1,500 food parcels and 500 packages containing meat were distributed to needy families living in different provinces of Yemen before the month of Ramadan.

The agency also distributed 1,500 food parcels and 500 meat packages to disadvantaged families, especially at women’s shelters, in Yemen’s temporary capital city of Aden as well as in Lahij and Dhale provinces.

The ongoing lockdown to curb the spread of the coronavirus has deprived a large number of daily wage workers of their source of income across the globe.

In Pakistan, the aid body provided 70 tons of food to 22,500 needy families in Ramadan.

As part of traditional Ramadan events organized by TIKA every year in the Philippines, 600 food packages were distributed to families in need in Dungguan village in Datu Montawal municipality on Mindanao island in Maguindanao province, where the majority of Muslims live.

During the month, TIKA also provided food aid parcels which also included masks and antiseptics to 7,000 families in Kyrgyzstan to support the Central Asian country's fight against the outbreak.

TIKA did not leave Rohingya Muslims aside during Ramadan. A total of 5,000 aid packages of staple food products were distributed to Rohingya refugees who live in camps in Bangladesh.

The agency continues to carry out many humanitarian activities in these camps without interruption.

After distributing 5,000 cleaning products at the beginning of Ramadan, TIKA last week also distributed another 5,000 food boxes equaling 70 tons, to those in need. The charity’s employees handed over the parcels personally to the homes of the elderly and sick.

In Georgia, the charity distributed 40 tons of food aid to 2,500 families living in the Ahıska, Adjara, Kakheti, Kvemo Kartli, Imereti and Samegrelo regions of the country.

The agency also reached out to families in countries in Europe and South America that were severely affected by the coronavirus outbreak.

TIKA distributed food packages to some 100 families in Granada in cooperation with the Granada Mosque Foundation every Friday throughout the fasting month. There are nearly 2 million Muslims in Spain, and at least 36,000 of them reside in Granada.

Across the Atlantic Ocean, the agency handed over aid packages consisting of food and hygiene products to 300 families in Colombia's northern city of Maicao and 150 families in the Santa Cruz region of Bolivia.

Since its founding in 1992, TIKA has been responsible for facilitating Turkey's official development assistance by providing help to developing countries. Operating in 50 countries, the agency has helped as many as 140 countries worldwide.

From Colombia to Myanmar and Namibia to Kosovo, the agency not only acts as an aid group but also contributes to the development of impoverished regions with its expansive network.

Over the years, the agency has produced tangible, modern and sustainable projects related to education, health, infrastructure, restoration, culture and humanitarian aid across the world.