Turkish army soldiers on with measures against pandemic 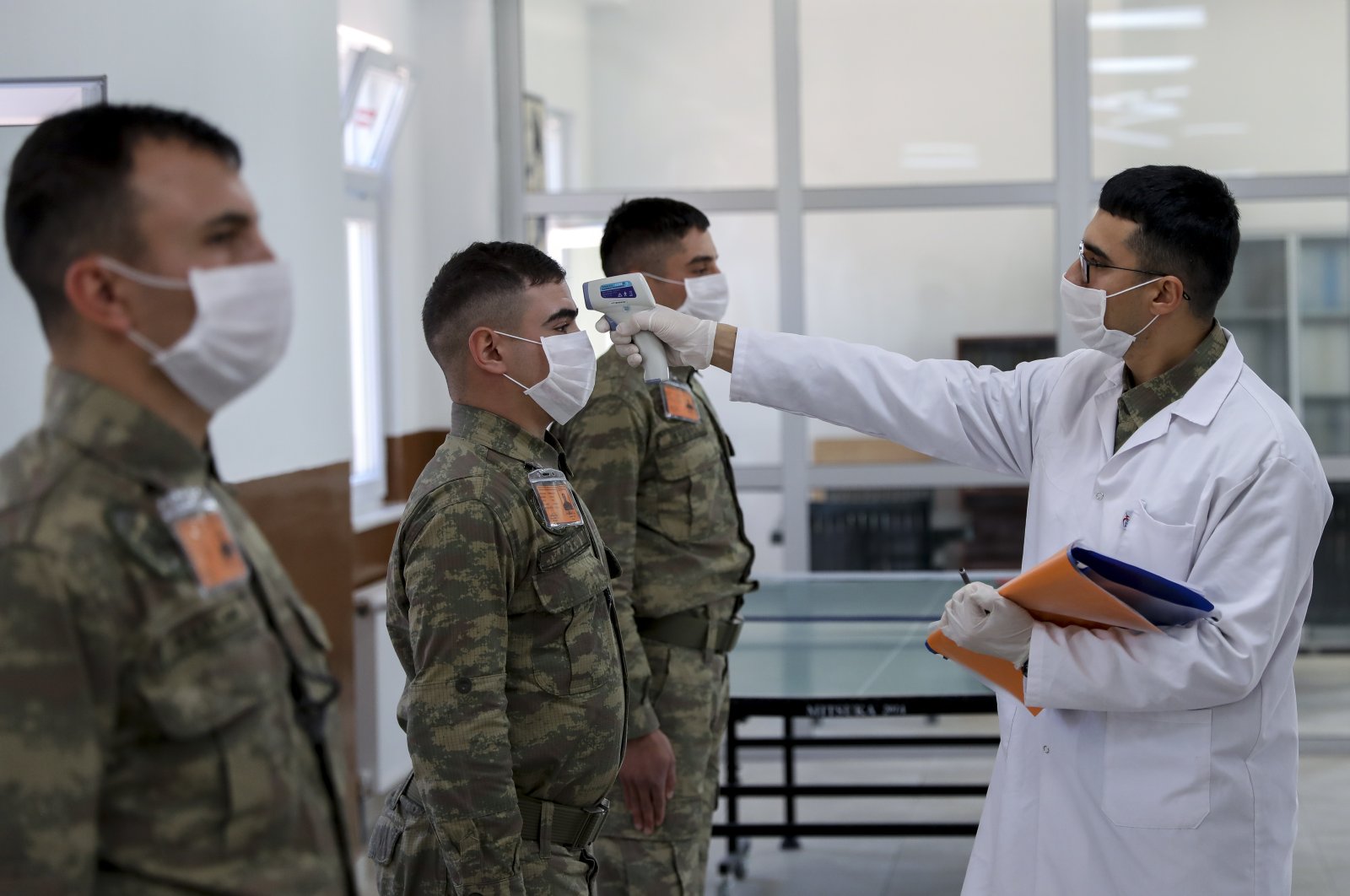 A doctor checks the body temperature of Turkish soldiers in this undated photo. (AA Photo)
by DAILY SABAH WITH AA Jun 07, 2020 2:55 pm
RECOMMENDED

Having lived in close quarters for months, about 500,000 soldiers of the Turkish Armed Forces (TSK) had raised concerns amid the COVID-19 pandemic. Nevertheless, the military announced that strict measures had enabled it to keep the number of cases low. So far, 156 positive cases have been reported in the military, with most having recovered. Currently, the TSK has some of the lowest number of coronavirus cases of any army in the world.

Like the rest of Turkey, the military was quick to implement measures overseen by its Center to Fight COVID-19 (KOMMER). Acting in coordination with the Health Ministry, the military – active around the clock to counter security threats – has managed to stave off the pandemic in all its branches, from the air force to gendarmerie units, conscripts, generals and more.

KOMMER both monitors international developments related to the virus and keeps an eye on the health of military members, drafting up plans specific for every branch with regular updates to measures. Like the Health Ministry, it sends crews to track down the last known contacts of any patients, with the power to isolate and treat them. It has also employed digital technology, setting up a database to monitor the situation of COVID-19 patients in the military.

The military is also active in northern Syria where it backs the Syrian Free Army in its fight against terrorist groups. Though the state of the pandemic is unknown in war-torn Syria, the military has stepped up its measures there, limiting contact between units and minimizing troop mobility. Any soldier returning to Turkey from Syria is placed under a 14-day quarantine, while military vehicles returning to Turkey from Syria are thoroughly disinfected. Each unit there was equipped with personal protective equipment and thermometers.

The military's motto throughout the pandemic has been "stay put," and all assignments and relocations of troops have been canceled, while conscripts entitled to weekend leave have been ordered to stay in their barracks. Military schools were also closed while the discharge of conscripts was postponed and new admissions canceled. The military also canceled local and international military exercises. Similarly, visitors have not been allowed entrance to the military bases. Each base was fitted with thermal cameras screening soldiers' body temperatures.

The Turkish navy had its fleet anchored off at sea while pilots in the air force were ordered to work shorter shifts.

At each base, social distancing rules have been implemented while hygiene rules have been boosted. Mess halls and dormitories have also been rearranged to keep the number of those sleeping and eating together at a lower level.

While enforcing its own measures, the military has also contributed to Turkey's fight against the pandemic. In factories producing clothing and equipment for the military, 40 million masks, 500,000 pieces of protective gear and 160 tons of disinfectants have been produced since March for soldiers, citizens and health care workers.