Turkish charities reach out to world during Qurban Bayram despite pandemic 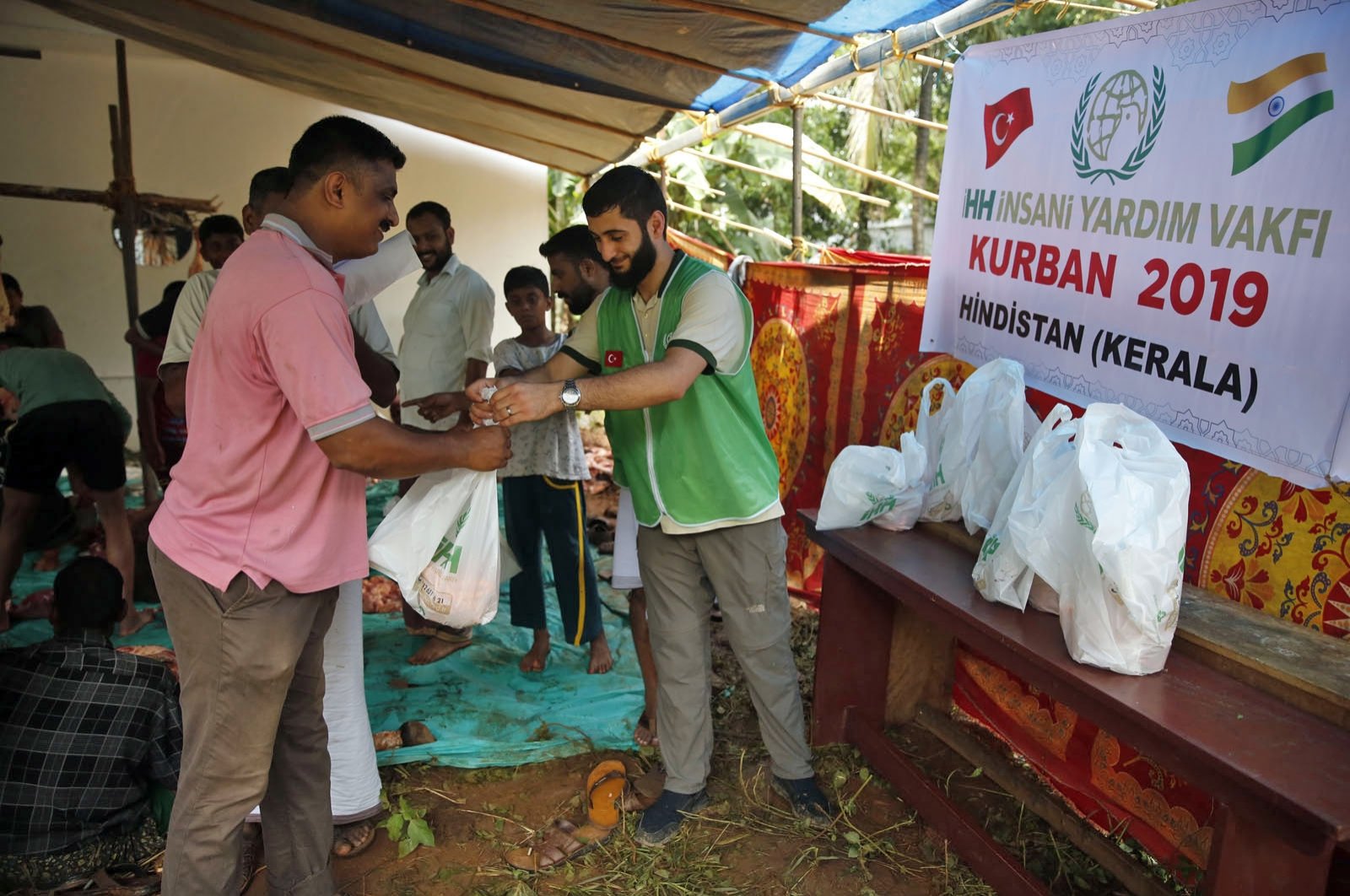 The COVID-19 pandemic has forced Turkish charities to scale back much of their work, but groups have managed to deliver humanitarian aid to the needy in dozens of countries in line with the Islamic holiday of Qurban Bayram, or Eid al-Adha

The ongoing coronavirus pandemic has aggravated the challenges millions of the poor face around the world. The Muslim holiday of Qurban Bayram, better known internationally as Eid al-Adha, has at least brought with it some relief to their problems.

An occasion to help the needy in Islam, the festivity – which obliges Muslims who can afford it to sacrifice animals and deliver their meat to those in need – is a time for heightened charity.

Turkey, named among the most generous countries in the world in terms of its annual volume of humanitarian aid, once again mobilized to reach out to communities across the world through various charities. From the Turkish Red Crescent to smaller organizations, nonprofit groups came together for aid delivery to countries and communities hit by conflicts, poverty and hunger. Limits on flights and other travel restrictions due to the high risk of COVID-19 infections has forced most charities to curtail their operations. Yet still, they have managed to carry ship supplies to the needy around the world, from the Middle East to Africa.

The Turkish Red Crescent has managed to deliver meat to some 4 million people thanks to Turkish donations.

Like most other charities, the nonprofit asks for set donations to buy sacrificial animals to give to those in need both in Turkey and internationally. The charity, which delivered food aid to more than 50 countries last year, has scaled operations back to 16 countries only, while focusing on those in need in Turkey, especially in areas affected by a string of earthquakes and the ongoing outbreak. Some 4 million people benefited from the charity’s aid distribution and about 1.7 million of them were in Turkey. To extend the period of aid delivery, the Red Crescent has opted to buy a portion of meat from sacrificial animals and regularly deliver this throughout the year to the needy. Much of the meat is also donated to soup kitchens abroad. For this year’s bayram, the charity was active in Somalia, Senegal, Sudan, Pakistan, Afghanistan, Indonesia, Bangladesh, North Macedonia, Bosnia-Herzegovina, Syria, Yemen, Iraq, Palestine and the Turkish Republic of Northern Cyprus (TRNC). Red Crescent staff oversaw the acquisition and slaughtering of sacrificial animals such as sheep and cows in those countries ahead of their delivery.

Another charity leading humanitarian efforts is the Turkish Diyanet Foundation (TDV), which is affiliated with the state-run Presidency of Religious Affairs (DIB). TDV sought to reach out to more than 20 million people in Turkey and abroad this Bayram with its aid efforts. It also had to scale back its operations. Instead of the 149 countries that they were active in last year, TDV staff delivered aid in 75 countries. The Sadakataşı Association, meanwhile, reached out to more than 800,000 people with humanitarian aid activities in 30 countries from Africa to Asia. Federations of the Associations Valuing Humanity (IDDEF), an umbrella organization of charities, slaughtered animals and delivered meat in 33 countries in Africa, Asia, the Middle East and the Balkans.

The Humanitarian Relief Foundation (IHH), another prominent charity, sought to reach out to 2 million people in need in 52 countries and regions. “Normally, we carry out (Qurban Bayram) work in more than 100 countries. It was like this in previous years. Unfortunately, due to the pandemic, this year it is not possible to go to every country and carry out our (aid) work," Durmuş Aydın, secretary-general of the foundation, told Anadolu Agency (AA). The IHH’s meat distribution focused mostly on those in refugee camps and war-torn and impoverished regions last year, including Syria, Myanmar's Rakhine State, Yemen and Palestine. Aydın said the IHH would head to countries where there were not so many pandemic-related restrictions, saying: "We will carry out our charity work through our partners and representatives in countries we are not allowed to enter."

The Istanbul-based charity has been actively working across the world for 28 years to distribute sacrificial meat to needy people.

“To experience the feeling of the (Qurban Bayram) aid activities, we take opinion leaders, journalists, university and high school students, academics, health professionals and volunteers from Turkey's various regions to countries where we carry out the work," Aydın said. He said this year the IHH had less opportunities due to COVID-19 limitations and would only send its own staff to distribute aid. He also said the charity had carried out two big campaigns during the pandemic: the Ramadan Bayram – or Eid al-Fitr – campaign during the Muslim holy fasting month of Ramadan and Qurban Bayram. Compared to previous years, the group noticed a "big increase" in donations during Ramadan and donations for the sacrifice campaign are progressing in this uptrend. "We think that our nation has increased its support for charities on the basis that ‘small charities defeat much trouble,'" he said, referring to an Islamic expression. “People are more sensitive about donations in this period, he said. "We think that it is because this year's hajj pilgrimage will be off-limits to most of the world's Muslims and the slaughter won't be performed in Turkey due to the threat of the coronavirus pandemic.”

The charity group focuses on the elderly, women, orphans and children as a priority in each campaign, Aydın said, adding it also ran campaigns primarily in crisis-hit regions. "Again, this year, we are showing more sensitivity to campaigns both in Turkey and abroad, and determine especially the elderly and day laborers as our main priorities." In addition, the IHH plans to give all orphan children in respective regions a festive gift, he said. He said benefactors can donate and gift an orphan TL 150 ($22) and make orphans happy during the holidays. Donations are distributed in line with the donors' requests among countries covered in this year's campaign while factoring in each country's needs.

In 2019, the IHH delivered 51,447 sacrificial meat portions to 2.57 million needy people in 93 countries and regions during Qurban Bayram.

Meanwhile, the Yardımeli International Humanitarian Aid Agency will help nearly 1 million underprivileged people across 26 countries, many under lockdown, during the Bayram.

The head of the organization committee, Sadık Danışman, told AA that the group is making efforts to reach 700,000 people across the globe. The animal slaughter and distribution of meat will be carried out in 53 different regions in 26 countries, he said.

"We went through a different preparation process for the festivities this year compared to previous years due to the pandemic," Danışman said.

The charity's activities will be carried out in Africa, Asia, the Middle East, the Balkans and Turkey, as well as in the Caucasus region. "We had to revise our plans, which were prepared months ago for the aid organization. We canceled plans to distribute animals in the regions that may pose risks as a part of the health care measures," he said.

The number of donations was set to increase this year as mass animal slaughter is discouraged in Turkey due to COVID-19, he said. "Since animal slaughter is discouraged en masse due to the pandemic, we expect that donors will fulfill their Bayram obligations through donations to charities." The Turkish nation's strongest suit in difficult times is cooperation and sharing, Danışman said, and even those who are in good financial shape also face difficulties during the pandemic. "We manage to keep up by supporting each other," he said. The charity's first priority during the pandemic was unemployed people and day laborers. During the holy Muslim fasting month of Ramadan – which was also observed during the pandemic lockdown, the charity delivered TL 6.5 million ($950,000) in cash to the unemployed in Turkey and abroad.

Of course, the priority during Qurban Bayram are orphans, the needy, the disabled and those who lost their jobs, he said. He said they also had measures in place to prevent a backlog of distribution. The charity also carried out the "Holiday Dress for Orphans" gift campaign in which orphaned children are delivered clothes of their own choice.