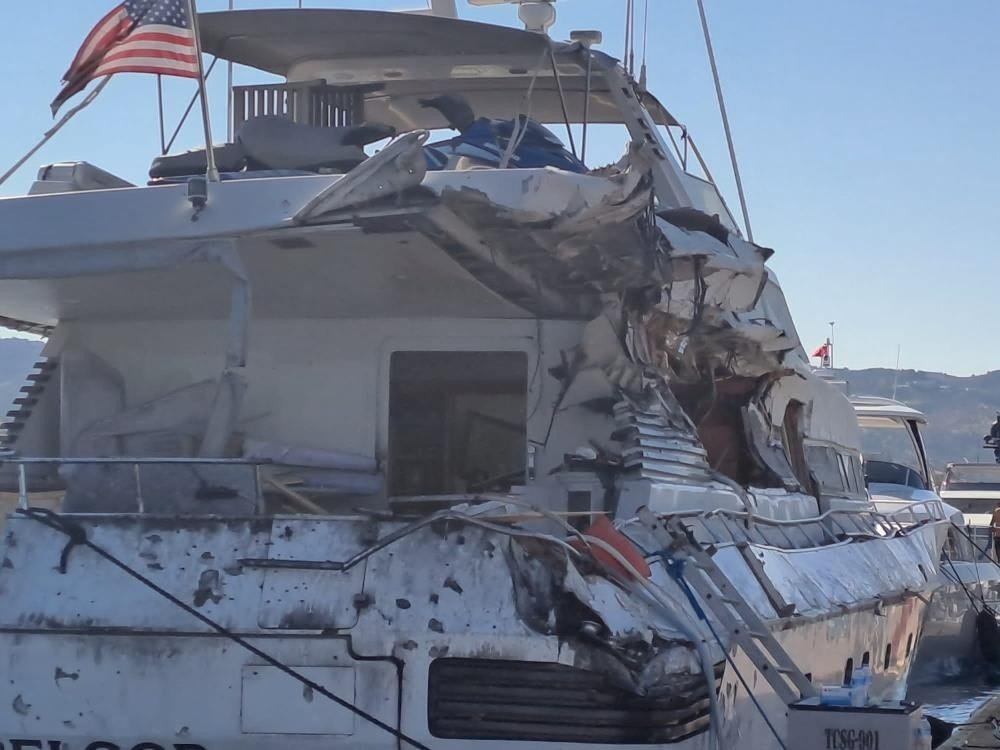 The damaged luxury yacht caught after a chase by a coast guard boat after a tipoff that it was trafficking drugs, Bodrum, Muğla, Turkey, July 29, 2022. (IHA Photo)
by Daily Sabah with DHA Jul 29, 2022 11:27 pm
RECOMMENDED

The coast guard units were involved in hot pursuit and confiscated 84 kilograms (185.18 pounds) of drugs after a foreign-flagged luxury yacht in Turkey's Bodrum district of Muğla rejected the former's request to stop but was ultimately stopped as it was about to leave Turkish territorial waters.

According to information received, a chase took place between the U.S. flagged 27-meter-long (90-feet-long) luxury yacht and a coast guard boat off the coast of Yalıkavak in the morning hours of yesterday.

Allegedly, the yacht, which fled by not complying with the order to stop by coast guard teams headed for Greek territorial waters.

The crews stopped the yacht when it was about to enter Greek territorial waters by crashing into the yacht from the side, and detaining four people inside the yacht.

The yacht, which is claimed to be worth approximately 8 million euros ($8.18 million), has become unusable. The procedures regarding the yacht are continuing and so is the interrogation of those taken into custody.

The chase was seen by some citizens living in the region.

The Interior Ministry reported that 84 kilograms (185.18 pounds) of drugs were seized on the luxury yacht.

According to a written statement from the ministry, on July 26, a notification was received that there were drugs on the 92-meter-long Vanuatu flagged commercial ship "Ocean Blue," which was in transit to Güllük Port in the Bodrum district of Muğla.

The motor yacht was chased by four coast guard boats, one coast guard diving team, a coast guard plane and helicopter belonging to the General Directorate of Security. After a long pursuit, the yacht was stopped by force with interception maneuvers. The four people on the motor yacht were caught and detained.

In line with the search decision taken by the Bodrum Chief Public Prosecutor's Office, the General Directorate of Security and coast guard teams searched the motor yacht "Belgor" and commercial ship "Ocean Blue" at sea.