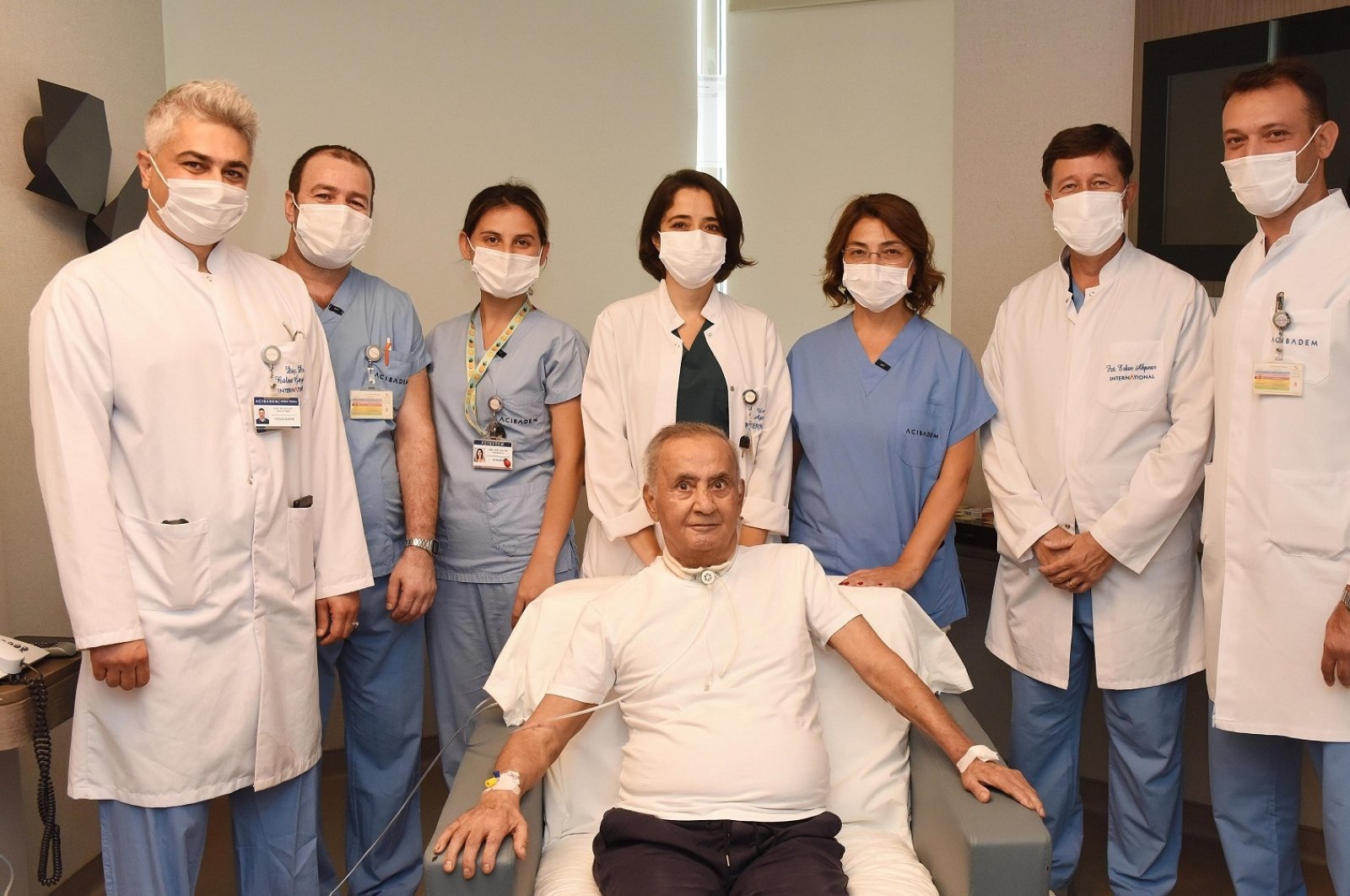 “Why is everyone is wearing a mask?” was his first question as he exited intensive care units four months after being diagnosed with COVID-19. Seventy-three-year-old businessman Oğuz Peker beat the coronavirus and was discharged from the hospital on Thursday, some five and a half months after he was hospitalized.

Peker, who lost consciousness, thought he was involved in a traffic accident when he found himself in the intensive care at a hospital in Istanbul. He is now trying to adapt to a new Turkey where everyone is obliged to wear masks and the doctors who nursed him back to health don head-to-toe protective suits.

He was a relatively healthy man despite his age and had just had a full medical checkup last March. His only problem was the onset of a slight case of chronic obstructive pulmonary disease (COPD). That was a time when hospitals were still open to all patients without emergency cases. Just one day after Turkey announced its first coronavirus case on March 11, Peker, an Istanbul native like the first case, started feeling unwell. Sudden fatigue engulfed his body, but there were no other symptoms. Neither he nor his family thought of the coronavirus. A nurse monitored him daily at his home but when his situation worsened, he was hospitalized 11 days later. On March 23, he was diagnosed with COVID-19.

“We did not know he would be that unwell,” his daughter Özge Peker told reporters on Thursday. Suddenly, they found all communications with him cut off as part of measures. She and her mother also had symptoms and were quarantined, though they recovered. “For two months, we could not see our father. We could only hear about him from his doctors,” she recounts. “I was speechless when I first saw him after two months, behind the glass window of the intensive care unit,” she said.

It was not an easy process for Peker, whose organs were damaged by the infection. He suffered from multiple organ failure, and doctors had to perform a tracheostomy to help him breathe. He was finally discharged from the intensive care unit on July 28, but the recovery was not over yet. His muscles had weakened, and he could barely move his arms or legs. What followed was physical therapy. Yet, a muscle rupture landed him in intensive care again on Aug. 7. After four days, he managed to recover from that too.

Doctors call him “a true survivor,” while Peker says he is confused about this “new world.” He still cannot believe he was infected with COVID-19. “I am grateful to all the hospital staff who brought me back to life by working day and night for months,” he says.

Professor Lütfi Telci, emergency room chief at Acıbadem hospital where Peker was treated, says they are happy to help Peker’s recovery. “He was admitted here in the first days of the pandemic, and this was a time where treatment protocols were changing almost daily. For instance, he was one of the first patients in Turkey to undergo plasma therapy. His every day here was problematic, from organ failures to septic shock, but our team managed to help him anyway. I cannot describe how happy we are to discharge him from the hospital,” he said.

PANDEMIC’S END IS NIGH

This new world of masks, social distancing and restrictions Peker woke up to is expected to continue for a while, but Health Minister Fahrettin Koca is hopeful. Speaking after a meeting of the Coronavirus Scientific Advisory Board, Koca said the end “is near.”

"We may be living the critical final months," the minister said Wednesday evening. Koca noted that the contagion has accelerated in the last two months, adding that the rate of infections was not slowing and urged people to take precautions. "The pressure it puts on our health care professionals has increased by four to five times," he said.

Turkey raised the number of contact tracers to 11,238 from 6,000 to monitor the spread of the virus, he added.

"Today, the world is in a more difficult phase of COVID-19 than at the beginning of the pandemic," Koca said, adding that vaccine studies will show positive results by the end of the year. Koca stressed that 51.6% of beds in hospitals were occupied, intensive care units are working at 66.3% capacity and 33.6% of available ventilators are being used. The minister added that intensive care units are working at 72.5% capacity in Izmir, 63.23% in Ankara and 59.61% in Istanbul. Of those infected, 7.1% suffer from pneumonia.

Another 1,771 cases of the virus were reported in the past 24 hours bringing the country's tally to 296,391, Koca said. The number of patients in critical condition has increased to 1,351. The minister said that 1,342 patients recovered from COVID-19 over the past day. Meanwhile, the death toll in the country reached 7,249, as 63 more people lost their lives. Health care professionals conducted 112,645 more tests to diagnose the disease over the last 24 hours, pushing the tally to over 8.85 million.

Turkey started Phase 3 trials for a Chinese vaccine on Wednesday. Two prominent experts say that once successful, the vaccine can provide protection for at least six months and a chance for Turkey to stop the outbreak from spreading further.

Professor Serhat Ünal, a member of Health Ministry’s Coronavirus Scientific Advisory Board, said at a press conference on Thursday in the capital Ankara that in “worst-case scenario,” the vaccine can provide temporary protection and if it proves effective, it can protect the population for three to four years. “Once you can break the chain (of infection), you have an opportunity to stop the pandemic,” he said. Professor Murat Akova of Hacettepe University where Sinovac’s vaccine was injected to the first volunteers, said they aimed to stop the ongoing risk, ahead of “most feared months” of October, November and December when the infection rate may aggravate.

Some 13,000 people will be vaccinated for trials in total and in the first stage, 1,200 people will be injected, all of them health care personnel. Akova said volunteers will be people between the ages of 18 and 60. “The vaccine was tried on 9,000 people in Brazil and 250 others in Indonesia. None have developed serious side effects so far, except a slight case of fatigue and headache,” Akova said.

Serhat Ünal assured the public about the vaccine trials. “We have been working on this for three months and evaluated its ethics and scientific aspects. There will be a trial for another vaccine once this is completed,” he stated. Ünal said the vaccine will be licensed and available for all if the trials succeed, adding that licensing can be completed by the beginning of 2021.