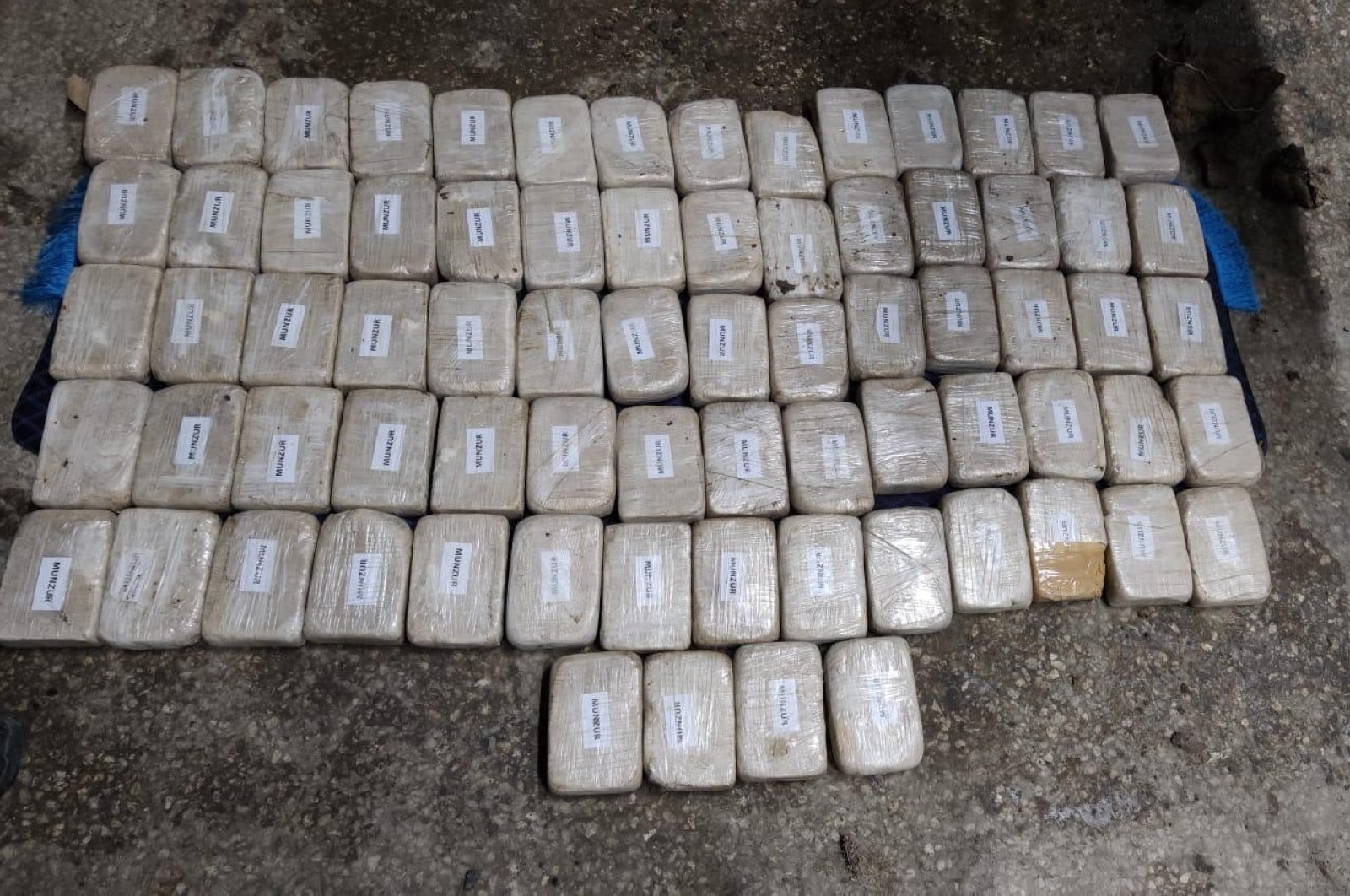 Thirty-seven kilos of heroin seized in the eastern Turkish province of Van on display in this file photo. (AA Photo)
by Daily Sabah with AA Mar 05, 2020 3:13 pm
RECOMMENDED

Turkish and Dutch police seized 2,384 kilograms of heroin in joint operations across five countries, Turkey's Interior Ministry said Wednesday. According to information received by the ministry, an organization was identified that was found to be trafficking drugs mostly to European countries. As part of the fight against the illicit trafficking of narcotics, Turkish and Dutch authorities investigated the organization. Turkish and Dutch police launched simultaneous operations in Kazakhstan, Germany, Poland, the Netherlands and Turkey. According to security sources, they seized 1,105 kg (2,436 pounds) of heroin in Kazakhstan, 703 kg in Germany, 350 kg in Poland, 171 kg in the Netherlands and 55 kg in Turkey.

Though drug routes have diversified in the world, Turkey, due to its location straddling Europe and Asia, remains an important transit route for smugglers, such as those transporting heroin from Afghanistan to Europe. European smugglers, in exchange, use the country as a direct market or a transit route for smuggling synthetic drugs. This made the country experienced in counter-narcotics efforts, and it stepped up international operations in coordination with other countries. Meanwhile, according to the European Monitoring Centre for Drugs and Drug Addiction, the Netherlands and Belgium are mostly source countries for MDMA/ecstasy seized in Turkey. Europe also remains one of the sources for synthetic cannabinoids seized in Turkey.

In 2019, Turkish and Greek anti-narcotics forces seized millions of opiate drugs in Greece and on the borders of Bulgaria and Serbia, in cooperation with the security forces of those countries. Back in 2015, Turkish security forces helped Italy seize 13 tons of drugs in a vessel sailing along its coast.

The country blamed terrorist groups, the PKK in particular, for the booming drug trade. The PKK is accused of smuggling drugs to and from Europe as well as the cultivation of cannabis in southeastern Turkey as a way to fund its illegal activities.

Interior Ministry spokesman İsmail Çataklı said in a press briefing on Thursday that police so far this year have seized nearly 3 tons of cannabis, 749 kilos of heroin, 32 kilos of cocaine and more than 1.3 million ecstasy pills.