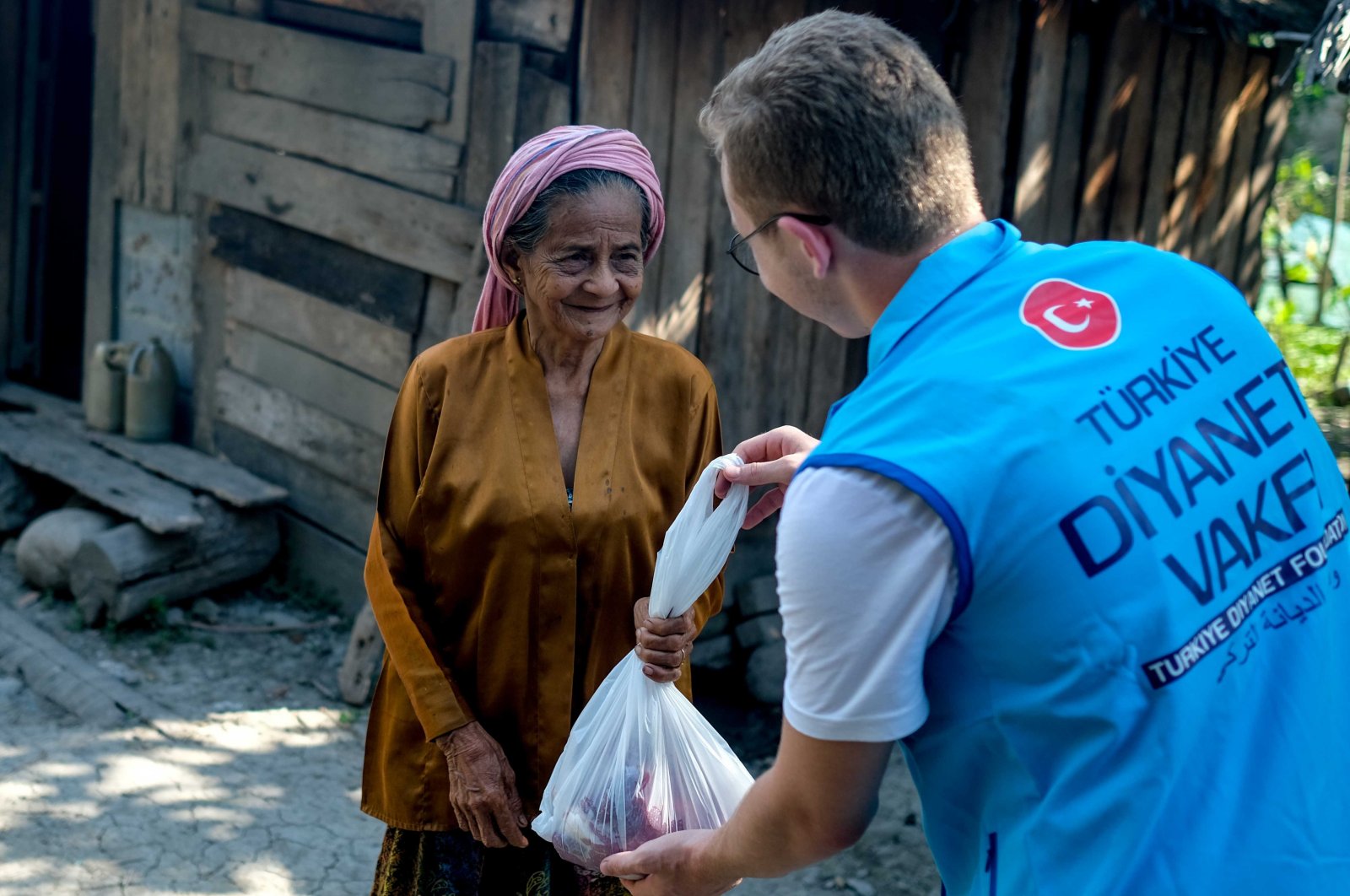 A Türkiye Diyanet Foundation (TDV) volunteer delivers aid to a woman in the Bangsamoro Autonomous Region of the Philippines, Aug. 11, 2019. (AA Photo)
by Anadolu Agency Sep 06, 2020 10:50 am

At the heart of Turkey's mission to reach out to the needy across the world, philanthropic groups highlight the importance of extending a helping hand on this globally significant day

Regardless of the size of virtuous deeds, every human should put forth his or her best effort to make goodness prevail on Earth, according to a charity run by Turkey's top religious authority.

"All kinds of material or moral actions and behaviors that can benefit the nation, the oppressed, victims, the needy, the stranded and the mournful people, without discrimination on language, religion or race can be regarded as charity," Ihsan Açık, second chairman of the board of trustees of the Türkiye Diyanet Foundation (TDV), said to mark International Day of Charity.

The United Nations General Assembly in 2012 declared Sept. 5 to be annually recognized as such.

Açık said a person does not need to build million-dollar structures or donate large amounts to be charitable, adding that everyone can be benevolent as much as possible, depending on ability and situation.

"Sometimes charity is a single smile, or caressing the head of an orphan, making an orphan feel the family compassion, consoling sad people, treating an injured animal or taking care of a hungry and thirsty animal," he said.

Açık said a charity has wide considerations, which might sometimes involve constructing a school, building a mosque or sometimes delivering a food parcel to the needy.

While some people are involved in charity work with financial means, others may also contribute skills and knowledge. "Teaching science and knowledge to society, children and young people can also be considered a charity," he said.

Charity is of great importance for people to get rid of difficult situations, to overcome sorrow, suffering and troubles and to continue their lives in peace, he stressed. "In fact, charity is important for goodness to prevail on Earth. A charity that we consider small can be a means of great goodness. It is necessary to act with this awareness," Açık said.

Talking about providing a system for alleviating poverty and preventing a cycle of dependency instead of delivering short-term assistance, Açık said it may not be possible to achieve that in regions where nongovernmental organizations (NGOs) like the TDV operate.

While there is always room for charity, Açık said, his foundation delivers aid to regions where there are urgent humanitarian needs, such as war zones, natural disaster areas and places where there is famine. "Therefore, it is almost impossible to create permanent jobs in these regions for needy people," he said.

When it comes to long-term social investments, however, the TDV also helps people earn a living by developing projects such as soap workshops, sewing courses, animal husbandry and educational activities in regions where possible.

Turks have always competed with other countries in charity in every period of history, Açık said. "We have a nation that is in a race to lend a helping hand not only to our own people but also to the oppressed and victims in countries that many have not even heard about."

He underlined that Turkey's good deeds are not limited by its borders as it crosses into other parts of the world, mobilizing all means to help the distressed, victims and orphans, and to be a remedy for the helpless.

"Wherever there is an oppressed person in the world, he is watching the path of our nation," he said, adding that the TDV witnesses how people in downtrodden and disadvantaged geographies, informed about aid coming to the region, wait for days at distribution points.

"We, as the Türkiye Diyanet Foundation, get strength from our nation and charitable people."

Highlighting the importance of driving people to get involved in giving, the charity group encourages Turks through different campaigns in various countries, Açık said.

He went on to say that the TDV mainly aims to launch regional and general campaigns in line with need and is making efforts to draw people's attention to crisis regions.

The foundation has 1,003 branches in Turkey and lends a helping hand to 149 countries in education, culture, social and charitable services, religious services and international aid, regardless of religion, language, race or gender.

"All of these have been realized with the support and contributions of our faithful, benevolent and charitable nation," he added.

Açık highlighted that through different projects the TDV has provided aid worth TL 300 million ($40 million) to Syria, TL 39.6 million to Myanmar's Rohingya, TL 37 million to the people of Yemen, TL 32 million to Palestinians, TL 5.5 million to Indonesia and TL 4.8 million to those in need in Sudan.

In 2020, the Turkish charity also delivered aid worth TL 40 million as part of activities during the fasting month of Ramadan.

The TDV also reached out to more than 20 million people across the world during the Muslim holiday of Eid al-Adha, or the Sacrifice Feast.

Also speaking on the occasion of International Charity Day, Durmuş Aydın, the secretary-general of Turkey's Humanitarian Relief Foundation (IHH), said social benefits could only be achieved by putting people's material or moral assets at the service of humanity.

By using one's own time, efforts or financial assets for the needy, charitable people help to beautify their environment and the world they live in, Aydın said.

It is necessary to encourage charitable people to volunteer their time and efforts, and to contribute to the professionalization of NGOs, he said, noting that any kind of support they can give in their areas of expertise is extremely critical to the development of charity organizations. "People do good not by donating only, but good works can be done by doing useful things for people at every stage of our lives," he said.

Aydın went on to say that in addition to cash contributions, all sorts of in-kind donations can also be delivered directly to those in need.

"This opportunity, which can be evaluated by self-employed people such as tradesmen, merchants and farmers, can be a remedy for many people's problems," he added. The IHH also prioritizes projects that will provide new resources for people to continue higher education and have a profession, especially for young people.

Focusing on the education of children, the aid agency regularly supports more than 100,000 parentless children in over 50 countries through the Orphan Sponsorship System, he said.

Moreover, as a part of its Agriculture School Project in Somalia, which was put into practice in 2012, the IHH, together with agricultural engineers who graduated from that institution, works to further popularize modern farming techniques in the country.

In addition to educational activities and providing urgent aid for poverty, health problems, hunger and thirst, the group also has a unit that deals with development programs that design and implement projects for people to maintain their own livelihoods, Aydın said. These activities include opening groceries, providing fishing boats, vehicles and sewing machines, animal husbandry and poultry farming as long-term solutions based on local requirements.

"As part of the sense of social solidarity, people in Turkey are very keen to support those in the country and in distant lands," Aydın said.

The nation has proven once again during the pandemic that it knows how to extend a helping hand to neighbors, relatives and the needy, he said, adding that Turkish people live in harmony with more than 3.5 million refugees, including those from Syria, who fled their homeland due to civil war.

Public stakeholders such as ministries, governorships, municipalities, mukhtars – the head of a local village, private sector representatives and NGOs are also pioneers in the development of philanthropy in Turkey, he said.

Aydın underlined that besides its own staff, the group encourages volunteers to participate in charity works. Thus, 871 people donated their time to help alongside IHH teams in the field last year, he said.

Noting that the IHH is a "big family" with more than 107,000 volunteers, Aydın said the charity group shares information with the public about works done through visuals, reports and open communication to maintain transparency.

"We believe that every person deserves a life with dignity and that they can live without needing help," he said. Aydın called for all of humanity and all benefactors to volunteer in NGOs to achieve this goal.

In 2019, the IHH provided aid worth TL 528 million in 80 countries, including TL 93 million in Turkey, he said, adding that more than 24 million people have benefited.

Since its foundation, the IHH has delivered aid from more than 2.5 million individual philanthropists to 135 countries on six continents, Aydın said.