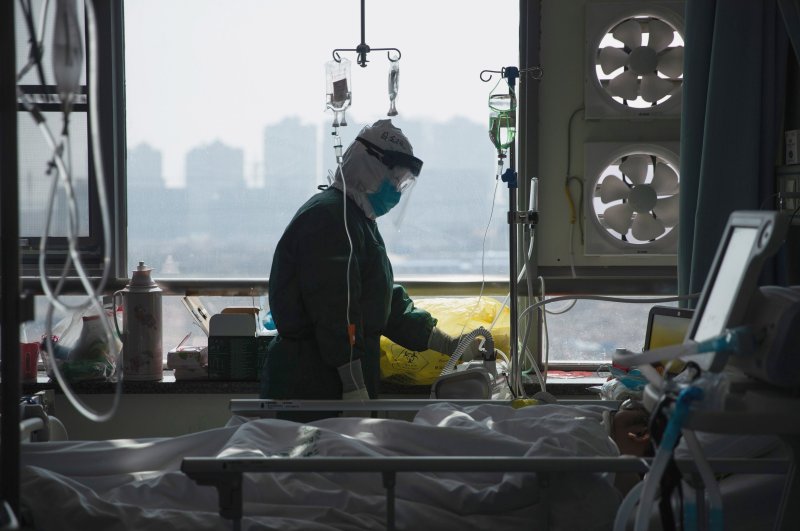 132 Turkish passengers and crew were evacuated from Iran Tuesday amid a coronavirus outbreak in the country. Turkish authorities assured that there were no cases of COVID-19 in Turkey yet and placed the arriving people in quarantine

A Turkish Airlines (THY) plane on Tuesday evacuated a group of Turkish citizens from Tehran amid a worsening coronavirus outbreak in Iran, the Turkish Health Ministry said in a statement.

The plane carrying 132 passengers and crew members landed in Ankara Esenboğa Airport later in the day.

Turkey's Demirören news agency showed footage of ambulances being lined up beside the plane and health personnel in white protective suits awaiting on the runway.

"The THY TK879 flight from Teheran to Ankara was planned," the Health Ministry statement read. Earlier media reports had claimed that the plane was originally heading to Istanbul but was diverted to Ankara. The passengers and crew were brought to a hospital that had been vacated beforehand and will be held under quarantine for 14 days. These are the first Turkish citizens arriving from Iran, where the coronavirus has recently spread.

The country closed its borders with Iran Sunday and canceled the majority of flights to the country due to the further spread of the virus.

Health Minister Fahrettin Koca reiterated in a separate statement that there has been no case of coronavirus in Turkey so far. "Turkey is putting in maximum effort to protect the country from this disease, he said.

Koca added that they arranged a special flight for Turkish nationals seeking to return from Iran and that all aboard the flight will be in quarantine at the Zekai Tahir Burak Hospital, which was exclusively allocated for evacuees from coronavirus-hit countries. Some 42 people including Turkish, Albanian, Georgian and Azerbaijani nationals who were evacuated from China's Wuhan, the epicenter of the coronavirus, were quarantined at the same hospital before they were discharged earlier this month.

Speaking to reporters late Tuesday, Koca said none of the passengers in the plane had a high fever and that only four had coughs while two others complained of a sore throat.
Koca explained that the decision to divert the plane to Ankara was because the medical personnel with the most knowledge of the deadly virus were stationed in the capital.

As neighbors Iran and Iraq reported first coronavirus cases, Turkey has been so far safe from the outbreak that has kept claiming lives across the globe since last month.

On Feb. 23, Turkey shut down all transport links with Iran, border crossings, train services and limited the number of flights. As of Feb. 21, Turkey also banned the entry of Iranian nationals from Qom, the virus' epicenter in Iran.

It currently allows Iranians in Turkey to return to their country though. Koca reiterated that no coronavirus cases were confirmed in Turkey as fake news dominates social media, claiming cases everywhere. The Health Ministry says they have always been transparent on the issue and coordinate efforts with the Science Board, a task force of scientists set up specifically to handle coronavirus cases.

Koca says Turkey changes the scale of measures based on developments and cited tough measures on the borders, including health checks at border crossings. "We denied entry to 26 foreign nationals with symptoms of the flu as part of these measures and sixteen Turkish nationals arriving from Iran between Feb. 21 and Feb. 23 were examined over their symptoms of flu and they were tested negative for coronavirus," he said.

Iran last week became the first country in the Middle East with confirmed cases of COVID-19. The outbreak in Iran has centered mostly in the city of Qom but spread rapidly over the past few days to people in four other cities, including the capital, Tehran.

Before the closure of the border crossings, Turkey had already intensified precautions at the border. Authorities in Van, a popular destination for Iranian tourists in eastern Turkey, installed thermal cameras at the Kapıköy border crossing Thursday, while border officers in contact with visitors were ordered to wear protective gear. Measures came amid an influx of Iranian tourists to the province of Van, which shares Turkey's longest border with the country, ahead of next month's Nowruz holiday.