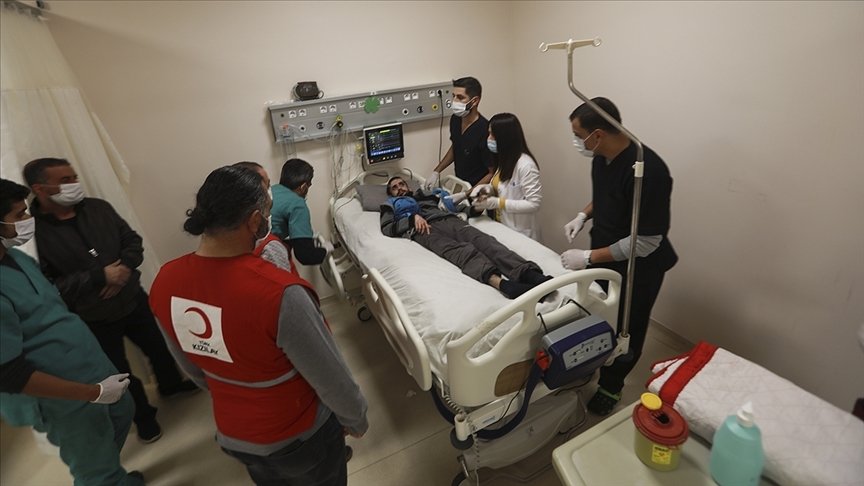 The Turkish Red Crescent (Kızılay) extended a helping hand to 18-year-old Abdullah Abu al-Homsi, who has suffered from a physical and mental disability since an attack by the Bashar Assad regime in Syria.

In an interview with Anadolu Agency (AA) on the occasion of the International Day for People with Special Needs earlier this week, his father, Saadeddin Abu al-Homsi, voiced hope that his son could get medical treatment.

Turkish Red Crescent teams in the region, which was liberated from terrorist groups with the assistance of Turkey in 2017, reached out to the father-son duo.

"We received the news of Abdullah through AA and went to his home,” said Ahmet Yetik, a representative of the Turkish Red Crescent. They provided the family with food, hygiene kits, clothes and a wheelchair, Yetik said. "When we saw that he was in a desperate situation, we immediately contacted a hospital and transferred him,” he added.

Salih Abu Muhammed, Abdullah Abu al-Homsi's doctor at the al-Bab State Hospital, said he needs special treatment. "Our patient had previously received a head injury in the war. As a result of the attack, his brain was disturbed,” Muhammed said, adding that he lost the ability to communicate with others.

Al-Homsi was born with a mild intellectual disability, and the attack five years ago worsened it. The attack also resulted in the death of al-Homsi's brother and forced his family to flee from Idlib to the city of al-Bab, in the countryside of Aleppo. Because of the regime assault, al-Homsi lost his ability to walk and speak, and his food consumption became restricted to liquids only. His father said that al-Homsi's weight had dropped to only 35 kilograms (77 pounds).