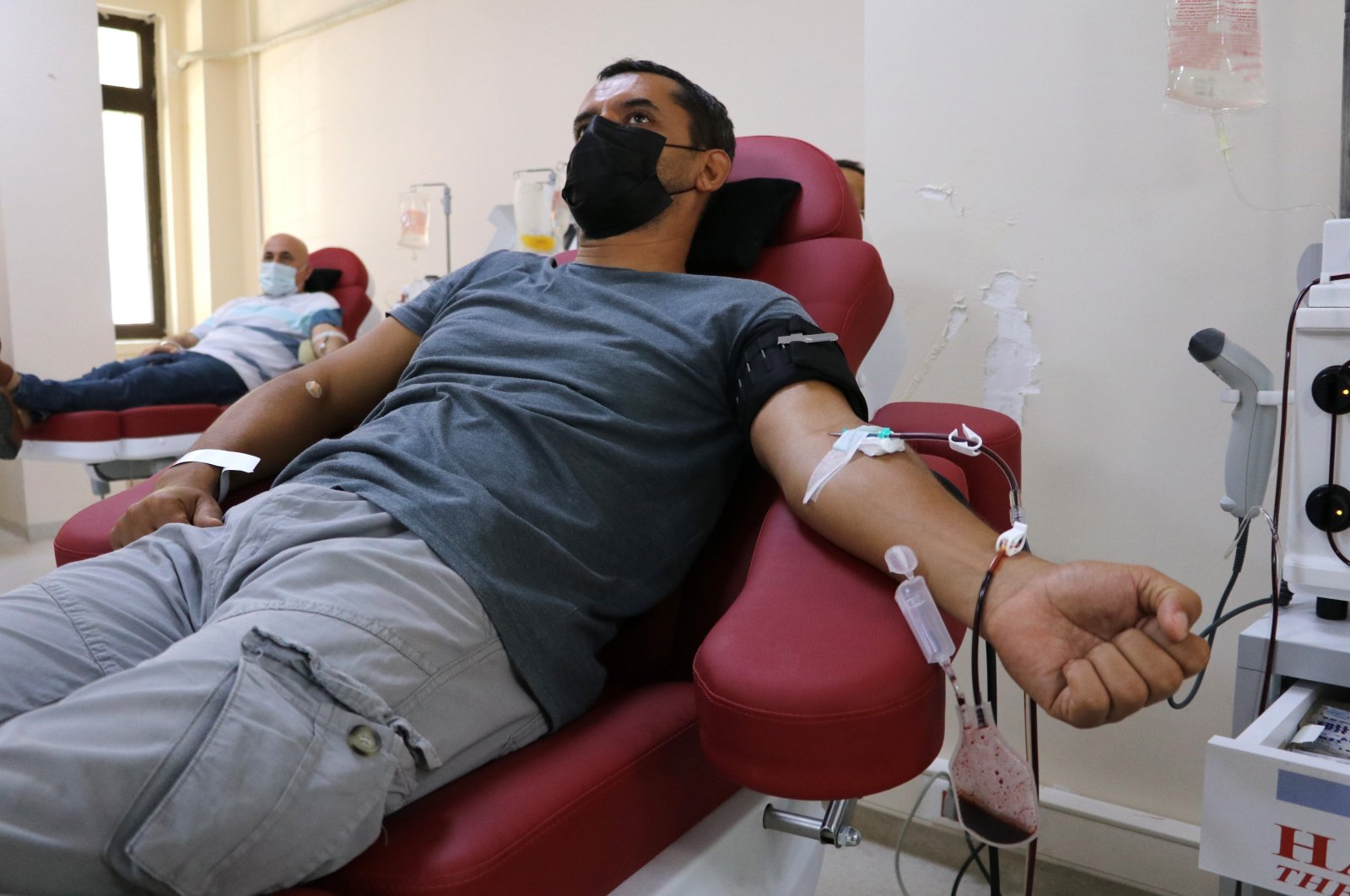 As plasma therapy gains pace as a supplementary way for treating coronavirus patients, the Turkish Red Crescent, which spearheads donation efforts, is rallying the public for more donations

Plasma is all the rage in Turkey, as the country tries every means possibles to help coronavirus patients, from vaccine studies to locally made drugs. The complementary therapy proved effective for patients but supplies started running out.

The Turkish Red Crescent, which oversees the plasma donation campaign, urged a public mobilization on Friday to ramp up donations.

Speaking at a news conference at a blood donation center in Istanbul, Red Crescent President Kerem Kınık said immune plasma stocks are on the decline due to rising COVID-19 cases in the country. He also called for a boost in blood donations as people apparently shy away from donating blood at the time of the pandemic.

“I appeal to potential donors who recovered from the coronavirus to donate. Their donation can save the lives of at least eight people and they will not be under any risk whatsoever with a donation,” he said.

Kınık pointed out that Turkey, like other countries, was going through the “second peak of the first wave” of the pandemic.

“The number of patients, critical patients, patients in intensive care increase. In parallel with this development, the need for immune plasma increases. We boosted our stocks with a large-scale campaign in June, July and August and had about 5,000 units of plasma at the beginning of September. But we ran out of these stocks now,” he said.

“Immune plasma is received from recovered coronavirus patients, with no microorganisms, from people with antibodies and people of certain ages. The Health Ministry shares a list of recovered patients eligible for donation with us and we contact them for donation appeals. Around 90% of those people agreed to donate, and this is the highest rate in the world. Since the first days of the pandemic, 13,698 units of plasma were donated. Studies show plasma decreases fatality rates and stays in intensive care, and accelerates the recovery process,” Kınık said.

Kınık also called for more blood donations, pointing out that the total amount of donations this year is below last year’s donations so far. “We are entering a busy period where the need for blood is rising, and we have trouble meeting the daily need. So, I call on our donors to donate,” he said.

Plasma therapy, which was also tried against SARS and Ebola outbreaks in the past, provides effective treatment and a temporary, vaccine-like protection for patients, especially for those with weak or suppressed immune systems. Antibody-rich plasma received from recovered patients boosts patients’ defenses to help fight off the coronavirus. Unlike a vaccine, it offers temporary protection and passive immunization.

Turkey on Thursday reported 1,648 new cases and 66 deaths from COVID-19 within the past 24 hours. According to daily data released by the ministry, the new infections were identified in nearly 110,000 COVID-19 tests carried out over the past 24 hours, bringing the total number of cases in the country to 298,039. The death toll from coronavirus increased to 7,315 with 66 new fatalities. Meanwhile, the total number of people who have recovered from COVID-19 increased to 263,745, with 1,143 patients declared free of the coronavirus in the past day.

Health Minister Fahrettin Koca said on Twitter that almost 9 million tests have been conducted so far and urged citizens to adhere to the measures. "It's in our hands to stop the increase in the number of losses and critically ill patients," he warned.

Turkey has been seeing a resurgence in coronavirus infections for the past few weeks, with daily infection rates slowly but steadily climbing.

Speaking in the western province of Izmir on Friday during an official visit, Koca said Turkey is seeing an “aggression” in the pandemic, noting the rise in the number of patients.

The one relief is the rise is not the same all across Turkey. For Izmir, Koca said they saw a 42% rise compared to one month ago. “Rapid and efficient intervention managed to control the rise and in the last week, the rate of the rise declined to 10% here,” Koca told reporters.

“We see undesired increases in some provinces, and in some provinces, the outbreak is under control thanks to solid measures and the sensitive approach of our citizens. Izmir was one of the places we focused on as it has a dense population and is home to multiple vacation resorts. It has a potential for the disease to spread as people either returned from holidays to Izmir or from Izmir to their hometowns at the end of the summer,” Koca said.

The minister called on people to comply with measures and pointed out that there was a rise in the average age of patients. “We see suffering in each province where measures are neglected,” he lamented.

In an effort to prevent a further increase in infection rates, the Interior Ministry last week declared wearing masks outside mandatory across all provinces. The order previously applied to only the worst-hit cities, with many provinces only requiring mask use in often-crowded streets. The government also reintroduced a previously removed capacity cap for mass transit vehicles, banning all standing passengers on buses and significantly reducing capacities for subways and Istanbul’s metrobuses.

He pointed out the rise in cases particularly in the capital Ankara and in Istanbul after restrictions were eased. “We saw daily cases rising to 1,700 and now we have to tighten the measures. The Health Ministry has to step up measures now,” the president said.

The president added that the country was also on track for vaccine development and said there were “positive signals” for possible completion of a vaccine in early 2021.