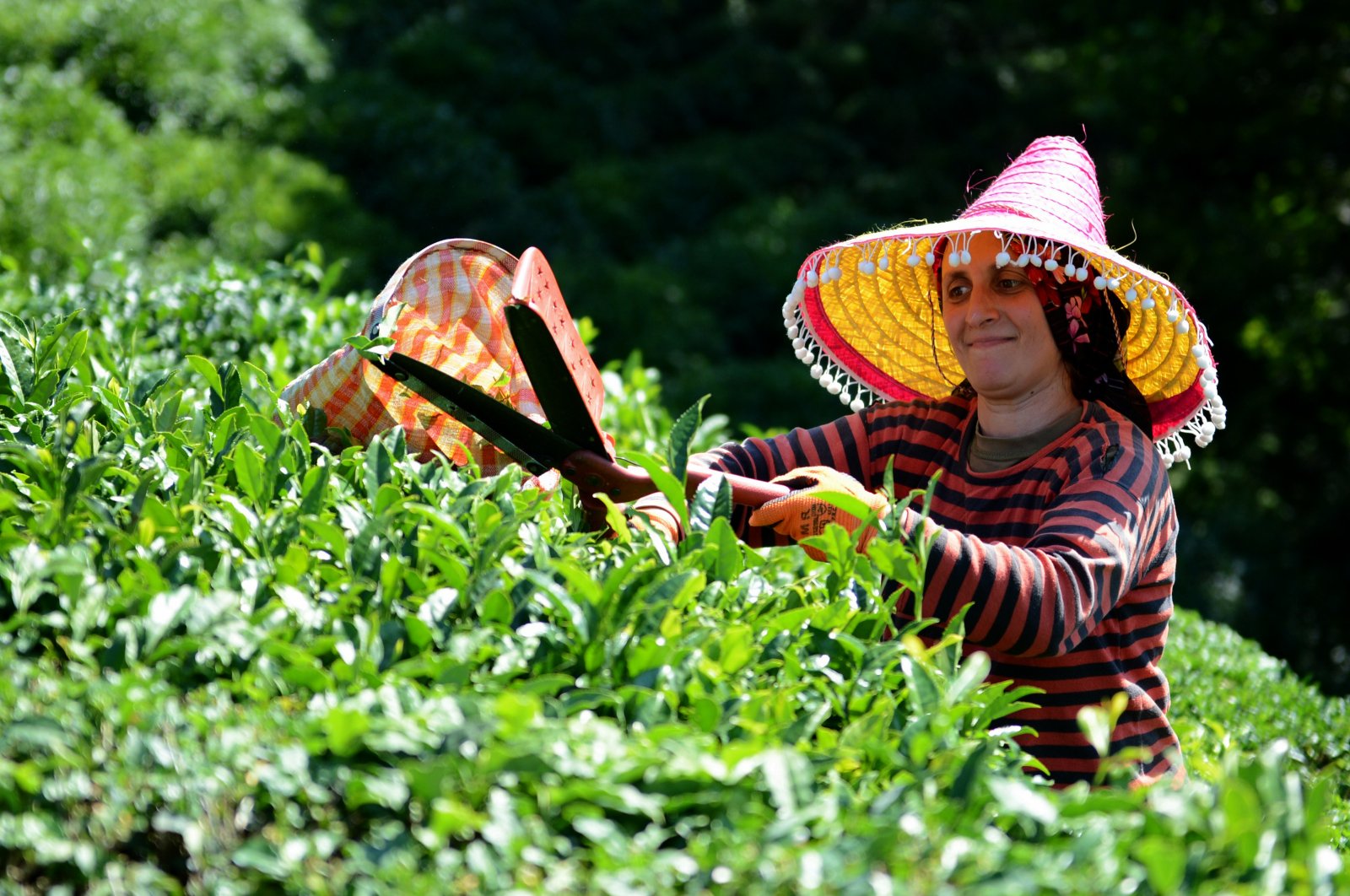 As restrictions due to the coronavirus prevent seasonal workers, especially from Georgia, from traveling to Turkey this year, tea producers in the region may have to turn to their neighbors to help haul in the leaves.

"Farmers in the region will have to go back the old days and do their own work due to the coronavirus epidemic," Mustafa Yılmaz Kar, secretary-general of the Trabzon-based Tea Industry and Business Association (ÇAYSİAD), told Anadolu Agency (AA).

Around 26,000 seasonal workers, especially from neighboring Georgia, are unable to travel to Turkey due to coronavirus restrictions as the borders have been closed since March.

As Turkey also imposed travel restrictions from province to province to stem the spread of the virus, farmers who own famed Black Sea tea fields but live in Turkey's largest city Istanbul are also having trouble getting to their farms.

According to Kar, around 65% of the people working on tea production already arrived in the region: "They already fertilized their fields and will also pick the tea."

But there are still farmers who live in places like Istanbul, unable to make it to the Black Sea region due to travel limitations, he added.

"They couldn't get permission, but we believe they will get the necessary documents," he said. "We expect that the permission will be given for those people."

One of those farmers in Turkey's northeastern province of Rize, known as the tea capital of the country, is Fatma Batumoğlu, who told AA that she doesn't know if her son living in Istanbul will be able to get permission to go to Rize to help with the harvest.

"We'll do our best to do the harvest this year," she said.

Batumoğlu said that Georgian workers have been harvesting her field for over a decade now.

Last year, a four-member family traveled across Turkey's northeast border to help with the harvest.

But she added: "We spoke with the Georgians this year, and they can't come because the border is closed."

In fact, this year Batumoğlu is not very keen on seasonal workers coming as she fears the virus's spread, but she urged the government to find a solution for tea farmers.

"In the past, my children knew how to pick tea, but the new generation doesn't because in recent years it's been Georgians who have harvested the produce," she added.

Kar agreed with Batumoğlu, saying seasonal workers have indeed made locals a bit dependent and out of practice, but added that this does not mean that Turkey cannot overcome this hurdle.

Highlighting a ÇAYSİAD project that fell short, Kar said that they tried to open a 5,000-person employment project to teach tea picking inside Turkey to be ready for situations when Georgians might not be able to come.

"This was supposed to be our plan B, but we couldn't manage it because we couldn't find local workers," he said.

Turkey earned over $3.8 million in tea revenues in the first three months of 2020 with exports to 75 countries, according to the Eastern Black Sea Exporters' Association.

The country's tea export revenue soared 51% in the first quarter compared to the same period last year, said the data released in April. Turkey exported over 1,000 tons of tea during this period.

According to Kar, renting fields to share earnings at the end of the harvest is a common tradition in the region, but it will not happen if the pickers are not allowed to come to the area.

The main problem for the region is that potential tea-pickers living in neighboring provinces will not be able to travel to the region due to travel restrictions.

"There are two to three weeks before the harvest begins, and we believe measures will be taken to prevent any problem," he said.

Kar also said people who cannot make it to the region are now giving their fields to their neighbors to collect the harvest.

Another downside of the travel restrictions on seasonal workers is a rise in wages, explained Kar: "Since there are no seasonal workers there will be an increase in costs, with daily wages rising to TL 250."

According to Kar, every year Turkish farmers pay around $100 million to seasonal workers coming from Georgia, but this year that sum will stay inside the country.

For Kar, the biggest health challenge could come after the harvest, when Turkey's General Directorate of Tea Enterprises (ÇAYKUR) buys tea from the farmers.

"These places get crowded during the tea purchases, and those areas will have to be regulated," he said, as crowds would violate the social distancing needed to keep the virus from spreading.

Founded in 1983, ÇAYKUR is a state-owned enterprise, employing more than 10,600 people in its 45 factories.

ÇAYSİAD already made some suggestions to prevent any crowding in these areas, Kar said.

"This isn't a problem for privately owned tea factories as they buy tea door-to-door from farmers," he added.

Kar said he expects ÇAYKUR to do the same or else start an appointment system for buying tea.

"People in the Black Sea region are hard workers. They won't leave their tea in the field," he said.

"This year will be a very productive harvest as the region got good rain," he added.

"Especially tea from May will be of very good quality, and we will drink very high-quality tea."