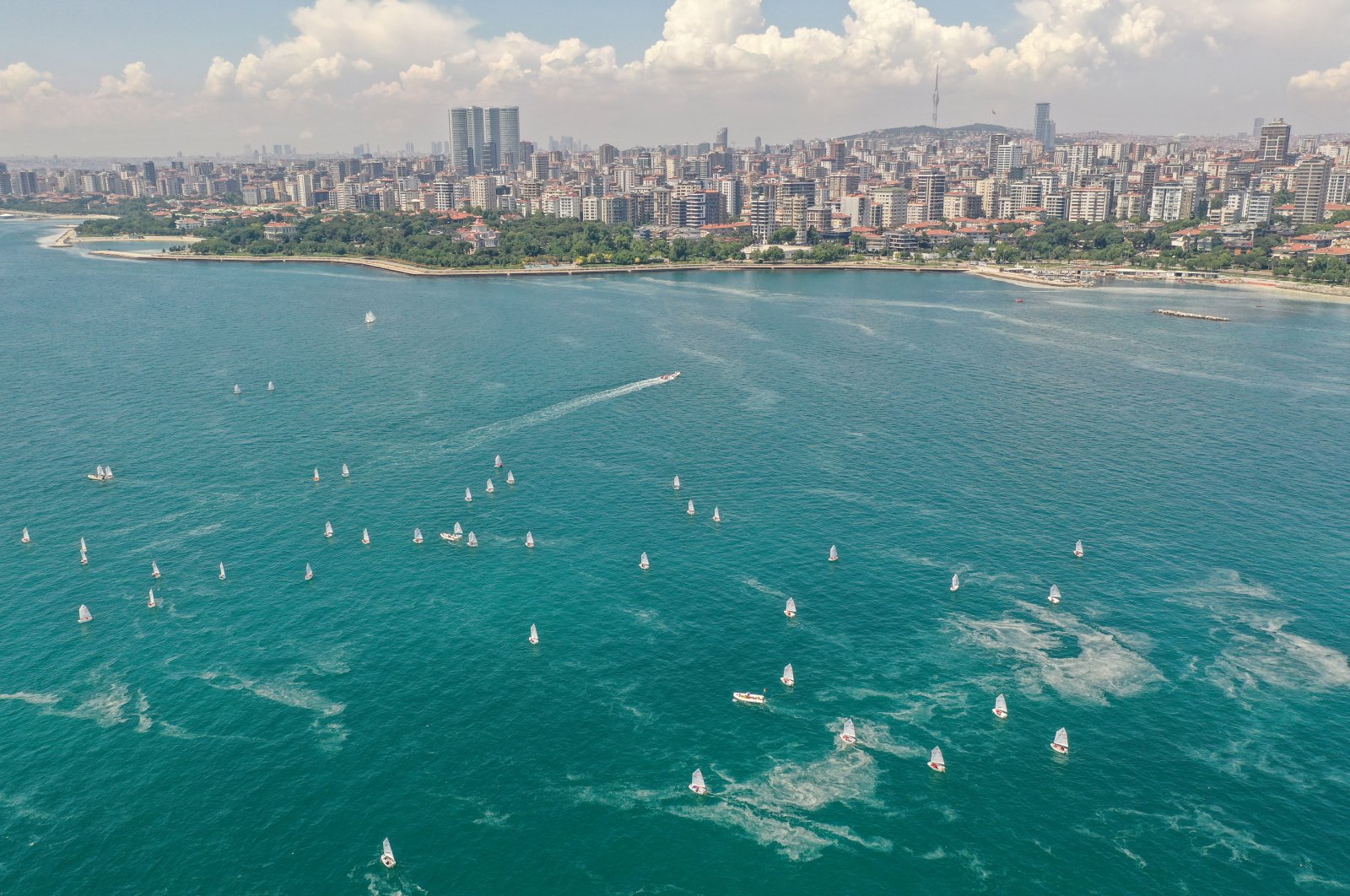 Aerial view of boats of the Optimist and Laser international classes competing during a race as the sea is partly covered by "sea snot," a thick slimy layer of the organic matter also known as marine mucilage, spreading through the Sea of Marmara and posing a threat to marine life and the fishing industry, Istanbul, Turkey June 13, 2021. (Reuters Photo)
by Anadolu Agency Jun 15, 2021 12:34 am
RECOMMENDED

A team from Istanbul University's Faculty of Aquatic Sciences has succeeded in cleaning mucilage formed on the surface of the Sea of Marmara with marine bacteria within its natural environment.

The pilot study was initiated by professor Gülşen Altuğ from the Department of Marine Biology and her team with the approval of the Ministry of Environment and Urbanization and the Ministry of Agriculture and Forestry in order to eliminate mucilage in its natural environment with beneficial bacteria.

The efforts were initiated at Yenikapı Yediemin Harbor in Istanbul's Yenikapı district.

After a barrier was laid on the sea to surround the mucilage, local bacteria selected by the project team among the bacteria that was previously isolated from the sea and whose metabolic properties were suitable for decomposing the mucilage was applied to the area every morning and evening.

Speaking to Anadolu Agency (AA), Altuğ said they started the project June 8 under controlled conditions and collected samples from the area prior to its implementation.

"In this context, we applied local bacterial isolates that we have isolated from the seas over 20 years to the mucilage covered area," she said, adding there was a dilution in the distribution of mucilage on the surface after the first application.

She said the second application was conducted June 10 and noted that they continued to examine the area every day.

After the third application on June 11, the dilution was more obvious and the mucilage formation was almost cleaned on June 12.

"On June 13, we did the application in the morning and we didn't need to do it in the evening. On the evening of June 13, there was no mucilage in the area we worked on," Altuğ said.

She stressed that the mucilage did not sink to the bottom of the sea either.

"We aren't concerned about whether this bacteria will cause any harm to the sea," she also said.

"This bacteria restricts disease-causing bacteria in the environment, decomposes nutrient organic matter and contributes to the marine ecosystem cycle by breaking down leaves, dead organisms and waste in the sea in normal times when there is no mucilage," Altuğ said.

Mucilage, also known colloquially as "sea snot," is an overgrowth of microscopic algae called phytoplankton and is caused by rising seawater temperatures due to global warming, stagnant water and pollution.

Turkish authorities have recently announced a 22-point action plan to clear the recent surge in the substance. The plan will be jointly carried out by the Environment and Urbanization Ministry, Transportation and Infrastructure Ministry and Agriculture and Forestry Ministry.