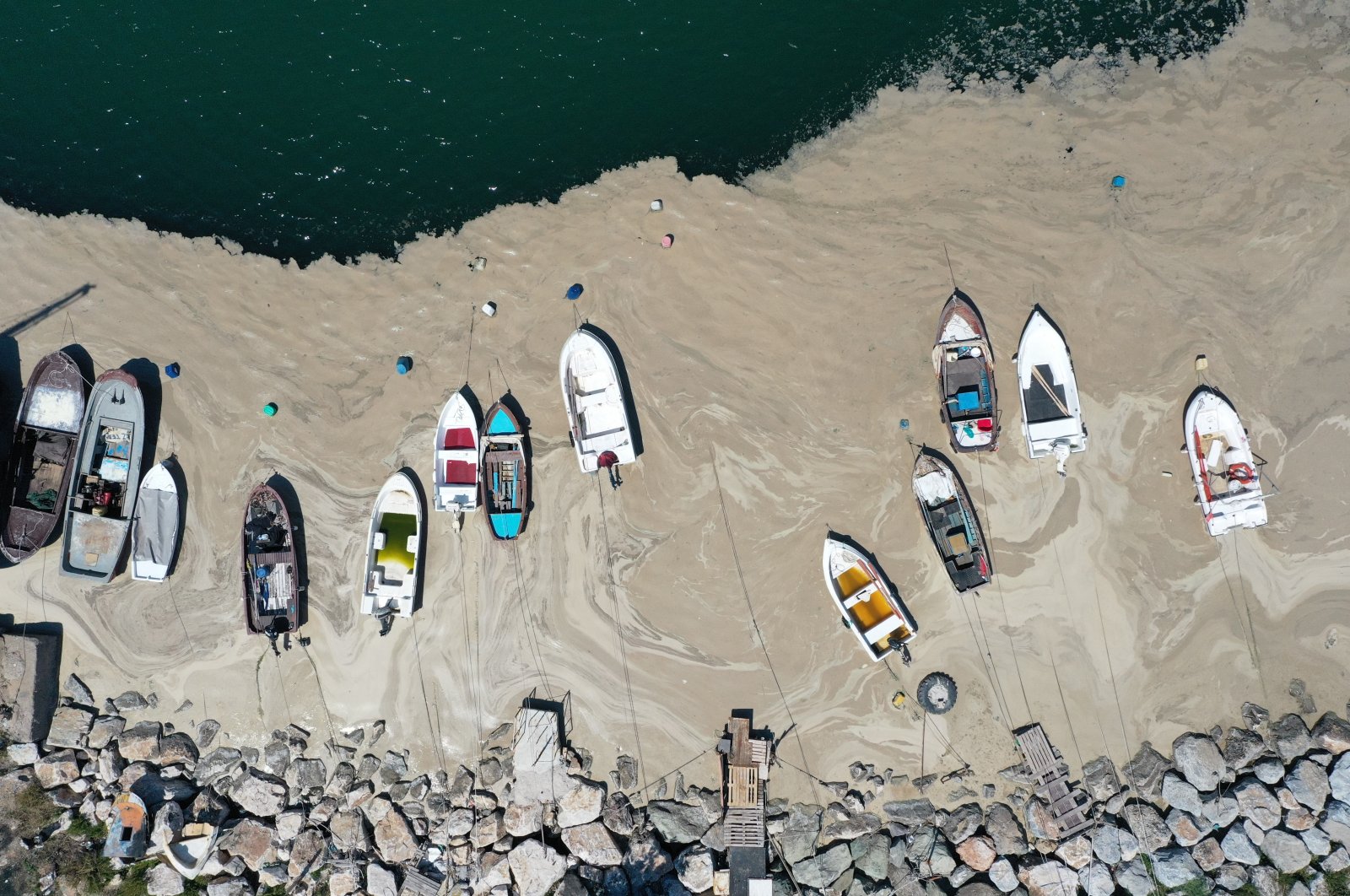 Crews have collected 392 cubic meters of marine mucilage, or 'sea snot,' from the Marmara over the past two days, authorities announced, as the harmful microorganisms continue threatening the Turkish sea

Drainage pipes extended into the water and boats hurriedly sailed off the shores of the Marmara Sea as marine mucilage, a thick layer of microorganisms spreading fast due to heavy pollution, continues blanketing Turkish waters.

The government launched an action plan and an emergency cleaning campaign along the shores of the landlocked sea earlier this week to combat the phenomenon threatening flora and fauna. Over the past two days, 392 cubic meters (13,843 cubic feet) of mucilage, colloquially known as "sea snot," were gathered for disposal. Crews are working in 31 locations in Istanbul, Kocaeli, Bursa, Balıkesir, Çanakkale, Yalova and Tekirdağ, the provinces lining the Marmara. Some 1,000 people aboard boats and on land are working around the clock to clean up the sea.

They managed to collect more than 235 cubic meters of mucilage on the first day of efforts Tuesday and Wednesday, another 156.6 cubic meters were collected, destined to be disposed of at waste collection areas.

In Istanbul, which has a long shoreline along the Marmara, crews managed to collect 103.8 cubic meters of mucilage in two days.

Divers jump into the sea to check the bottom where the sea snot is more prevalent, while on the surface, boats lay floating barriers, before skimming the mucilage. Strong winds in some locations also help with the disposal efforts.

Environment and Urban Planning Minister Murat Kurum, who launched the cleanup campaign on Istanbul’s Caddebostan coast, told Anadolu Agency (AA) that it was the biggest maritime cleanup campaign in Turkey. “Our work will eliminate the visual pollution and the smell in the Marmara and help sunlight reach the bottom (for growth in the underwater ecosystem). Our work will be helpful to keep it clean and I want to assure the public that we will make the Marmara clean again, with a spirit of mobilization,” he said.

Sea snot has dealt a huge blow to fishing, the main income for thousands in the Marmara, with fish turning up dead in areas affected by the mucilage. Although experts say the snot does not leave “poison” inside the fish as previously presumed, fishermen have complained of a drop in sales. Sabah newspaper reported that fish sales in Marmara provinces decreased 70% after the news of the sea snot. Though fishing season, which otherwise started out well, is over now, fishermen say that if the mucilage lingers, the new season may see a further drop in sales. Authorities say it may take at least one year to clean up the sea snot. Elsewhere, sea snot also threatens tourism, with reports of mass cancellations of bookings at hotels and similar venues in popular vacation spots, from Istanbul’s Prince’s Islands to Erdek and Çınarcık in the south of Sea of Marmara. Real estate agents also report a lull in sales and rentals of summer residences in areas along the shores.

“I witnessed what we’ve caused together,” Mehtap Çiftçi laments. A diver and underwater photographer, Çiftçi was among those examining the damage the sea snot left at the bottom of the sea. “The Marmara Sea is sick and fighting for life. The bottom is worse than the surface. I conducted dives in Gemlik, Izmit and Mudanya (towns littoral to the Marmara) and everywhere; the bottom was like a scene from a horror movie,” Çiftçi told Sabah newspaper. “It is like a powerful bomb flattened the bottom and sucked out life there. I could not touch the bottom because of mucilage. It was very blurry and no sign of life. I could only dive about 10 meters (33 feet),” she said. She said mussels, oysters and green algae at the bottom were all covered with the snot, and she came across only a few surviving fish. “When you look at the surface from the bottom, it felt like you were under a thick layer of ice. The mucilage dried up and was very solid. It almost built a prison, a ghost net for the fish,” she said.