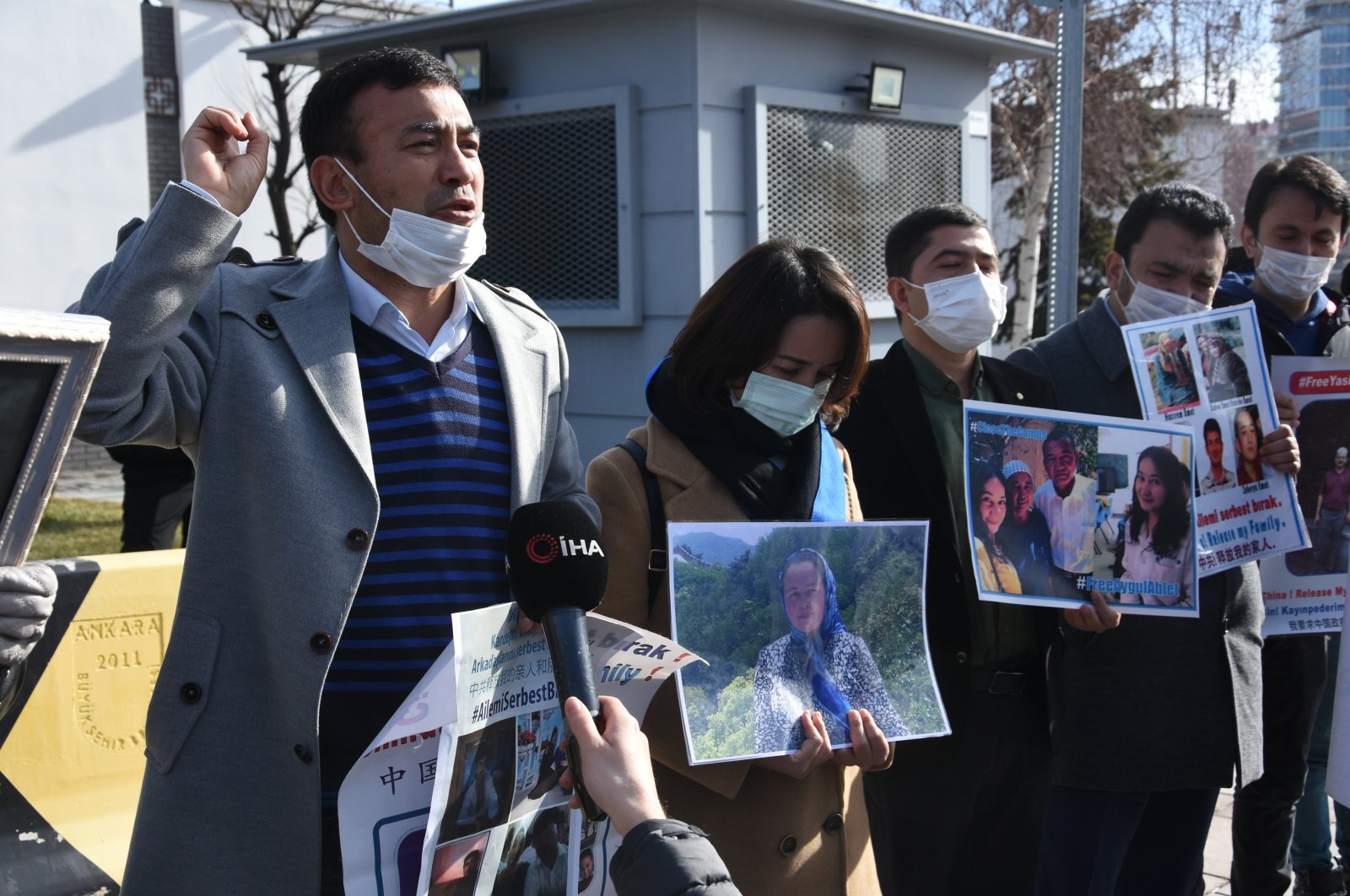 A group of Uighurs protest in front of the Chinese embassy asking for their missing relatives, Istanbul, on Feb. 3, 2021. (AA Photo)
by Daily Sabah with AA Feb 03, 2021 5:55 pm
RECOMMENDED

Uighurs living in Turkey staged a sit-in outside the Chinese Embassy in Ankara on Wednesday, demanding to know the condition of their family members being held at forced labor camps in Xinjiang amid accusations of genocide directed at the Chinese government.

Last December, nearly 100 people gathered peacefully outside the Chinese Consulate in Istanbul in protest for 18 days. The protestors said they had not heard from their families since 2017.

Speaking to reporters on behalf of the protesters, Mirzahmet Ilyasoglu said: "There are files (requesting information) on at least 5,199 people we know of. We took these files to the Chinese consulates, but Chinese officials did not accept it."

"We will not spare any opportunity to reveal China's genocide against humanity," he added.

He stated that they would continue their protest in front of the Chinese Embassy "until the detainees in the camps are released."

Last month, a bipartisan commission from the U.S. Congress said that China had possibly committed "genocide" in its treatment of Uighurs and other minority Muslims in Xinjiang.

Many countries have accused China of systematically persecuting the minority, leveling charges of rape, dislocation and forced marriages among other human rights violations against Beijing. France, for example, said that it will oppose the proposed investment agreement between the European Union and China over the use of forced Uighur labor,

Additionally, Chinese technology giants have already developed tools that can detect, track and monitor Uighurs, in a move human rights groups fear could entrench the oppression of the Muslim minority.

Rabia Gül, a university student in Turkey on a Turkish scholarship, said she has not heard from her 52-year-old mother for three years.

She filed a request with the Chinese authorities demanding to know the whereabouts of her mother.

"After waiting for a year and a half, they said they could not help me because I had connections with terrorist organizations against China. I applied to renew my passport, but they said I couldn't get a passport," she said.

Another protester, Medine Nazimi, who has Turkish citizenship, said she was worried for her 34-year-old sister Mevlude Hilal who has been missing for over two years.

Hilal was initially taken away by Chinese authorities in 2017 but released in 2019. Shortly after her release, she was arrested again, forced to leave behind her 2-year-old daughter and taken to the camps.

"Chinese authorities took my sister to the concentration camp in 2017, after the release in May 2019 they re-arrested her in June 2019 on the grounds that she had studied in Turkey," Nazimi said.

"After stalling for months, the Chinese government directed me to request information from Turkey's Beijing Embassy or the Chinese Consulate in Istanbul or Ankara Embassy. I have sent e-mails, went to the consulate and staged a sit-in for 17 days but still did not receive a reply," she added.

Separately, Alimcan Turdiniyaz, who has at least six family members and a close-friend held at the Chinese camps, said: "As of today (Wednesday), we have started a sit-in protest for our families in front of the Chinese Embassy in Ankara. We will never give up this determined stance. We will not give up until our family and loved ones are free."

China has been widely accused of forcing Uighurs into camps and there have been reports of forced sterilization of Uighur women.

Beijing's policy in Xinjiang has drawn widespread criticism from rights groups including Amnesty International and Human Rights Watch, which accuse it of ostracizing the 12 million Uighurs in China, most of whom are Muslims.

Up to 1 million people, or about 7% of the Muslim population in Xinjiang, have been incarcerated in an expanding network of "political re-education" camps, according to U.N. experts.

The camps have been linked to forced labor and mandatory sterilization.