Vaccination drive against COVID-19 expands to nursing homes in Turkey 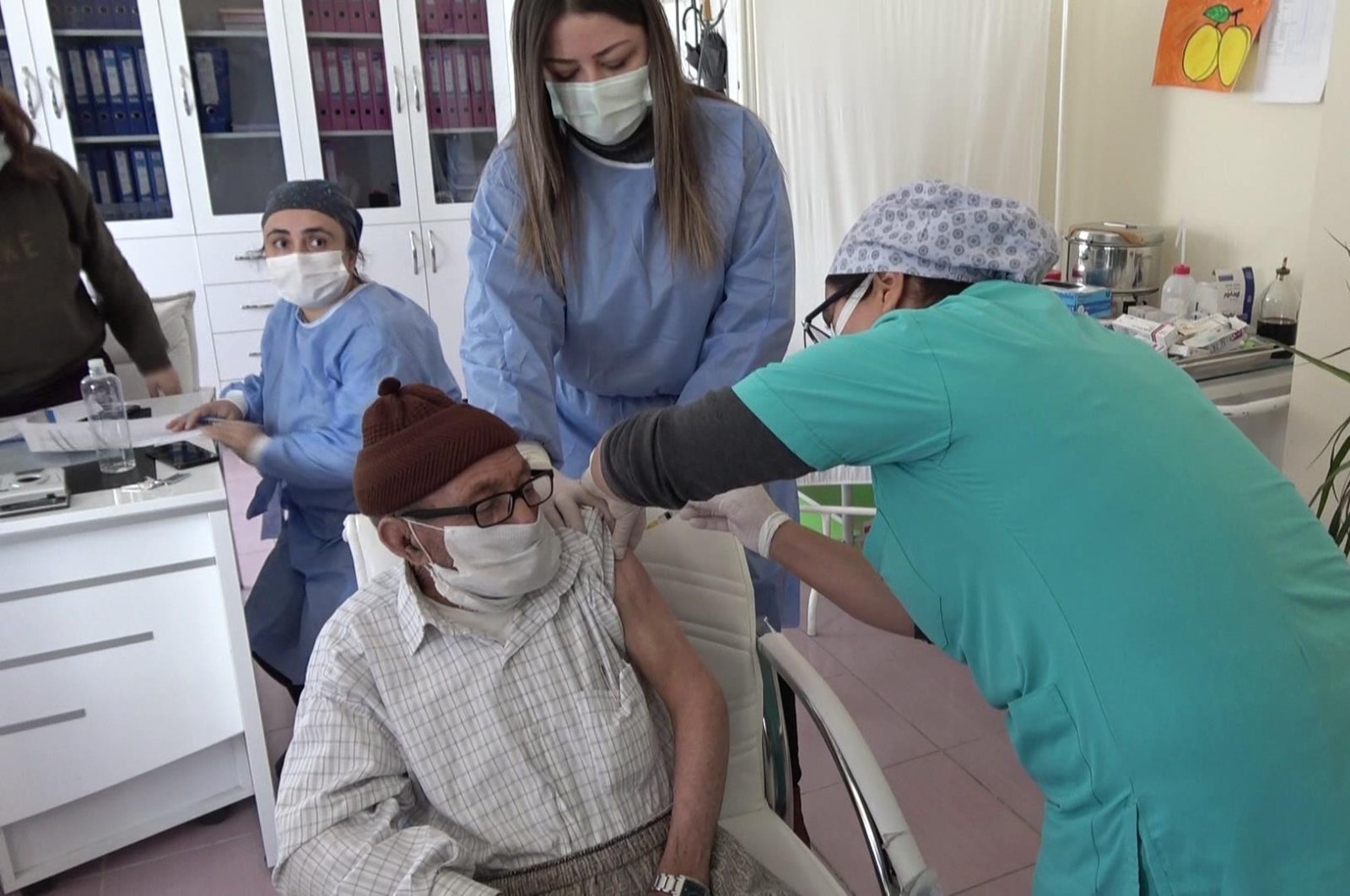 As the vaccination drive for health care workers against the coronavirus nears its end, authorities launched mass inoculation on Tuesday for the elderly staying at nursing homes across the country.

A total of 87,120 people, including nursing home residents, residents of care centers for the disabled and staff working in those places, started receiving their first doses of CoronaVac, an inactive vaccine developed by China’s Sinovac. A second dose of the vaccine will be injected into those who received the first jabs 28 days later.

The elderly are at high risk for infection, therefore, they are prioritized. The Health Ministry also recently announced that citizens above the age of 90 would also get vaccinated this week in their homes. The country plans to complete mass vaccination for nursing home residents and staff within a week.

Authorities examined the detailed medical histories of each person staying and working in those places and set up special rooms to administer vaccinations inside each nursing and care home. Among those who will be vaccinated are 24,200 senior citizens and 30,000 disabled individuals. Theirs will be the only personally delivered vaccines as other citizens are required to visit hospitals or clinics to get inoculated.

The coronavirus outbreak, which made its foray in Turkey last March, exposed vulnerable senior citizens to the risk of infection. The elderly have long constituted the majority of coronavirus-related deaths. However, nursing homes were quick to respond to the outbreak and drew the praise of World Health Organization (WHO) officials for their measures, including guidelines issued to each home two months before the first cases were reported. After the outbreak, new admissions were canceled, and residents were not allowed to leave. Visitors were also barred from entering the premises. The staff was also subject to a new shift system, reducing the infection risk, and regular coronavirus tests were conducted frequently. Each nursing home also has isolation rooms now, allocated for potential patients before their transfer to hospitals.

Authorities already determined who will get vaccinated first based on their immediate vulnerability but members of different professions have called on authorities to change their plans.

Health Minister Fahrettin Koca said on Monday that according to the schedule, the inoculation of Turkey's health care workers will be completed by Wednesday. Some 830,000 health care workers were vaccinated as of Monday. The first batch of 3 million doses of the vaccine developed by China's Sinovac arrived in Turkey on Dec. 30. In addition to health care workers, President Recep Tayyip Erdoğan and other top officials were also vaccinated to encourage the public. Those who recovered from COVID-19 will not be vaccinated in four to six months following their recovery. The Health Ministry drafted a road map long before the arrival of the vaccines and determined that health care workers would be the first to get inoculated, followed by senior citizens, specifically those with at least one chronic disease. People working in critical jobs, like soldiers and police officers, are also prioritized in the vaccination drive.

Recyclable material collectors, who salvage materials from dumpsters, are among those seeking priority in vaccination. Their work was not interrupted by the pandemic and they still spend most of the day scraping whatever they can find worth selling for recycling. Mahmut Uğur Çetin, head of the Confederation of Recyclers, told Anadolu Agency (AA) on Tuesday that collectors were among the people at imminent infection risk. “We are talking about a sector directly in close contact with the coronavirus. They scour dumpsters where people dumped single-use protective masks, gloves, clothes and empty boxes of sanitizers,” he said.

“There are nearly 500,000 collectors. They work in an unofficial job, but they fill a gap in the sector anyway. Certainly, health care workers should be prioritized in the fight against the pandemic, but these people also deserve a priority in vaccination,” he said.

Along with collectors, members of another profession remain on the streets, which are largely deserted during nights and throughout the weekend due to outbreak-related curfews: reporters. Sinan Burhan, head of the Anatolian Association of Publishers (AYD), which represents journalists working in print and broadcast media, said in a statement Sunday that media staff should be vaccinated immediately. “Journalists work day and night, during the curfew and in other times, just to cover developments for the public. They are out on the streets all the time. We hope health authorities will assess our recommendation to prioritize them in vaccination,” he said.

For teachers, early vaccination will ensure an early start to in-person education. Though schools remain closed, National Education Minister Ziya Selçuk said on Sunday that they could be reopened next month based on the recent coronavirus trends. Talip Geylan, head of Türk Eğitim-Sen, a labor union of teachers, said the vaccination plans should be updated to prioritize teachers. “All people working in the education sector should be vaccinated primarily before the start of in-person education,” Geylan said in a written statement Monday.

As the vaccination drive continues, so does strict measures against the outbreak. Though the government plans to scrap partial lockdowns imposed weekday nights and throughout the weekends in the near future, they are expected to linger a while longer as authorities warn against people dropping their guard amid vaccine hopes.

Restrictions apparently significantly helped drop the number of infections. On Monday, for instance, the country reported only 5,862 new cases, down from 6,436 Sunday. The overall number of cases stands at 2.3 million, while fatalities exceeded 24,000 since last March when the first cases were reported in the country. The number of recoveries reached 2.2 million and the number of tests is now over 27.5 million.

Amid these developments, the Health Ministry announced Tuesday that health care workers can now take their yearly leave, which was scrapped last year to help the fight against the pandemic. A letter sent by the ministry to its local directorates in 81 provinces says they can take their leave unless it impedes the public health services. The ministry also removed a ban on retirement for health care workers seeking to do so.