Villages, towns in Turkey under quarantine amid measures against the outbreak 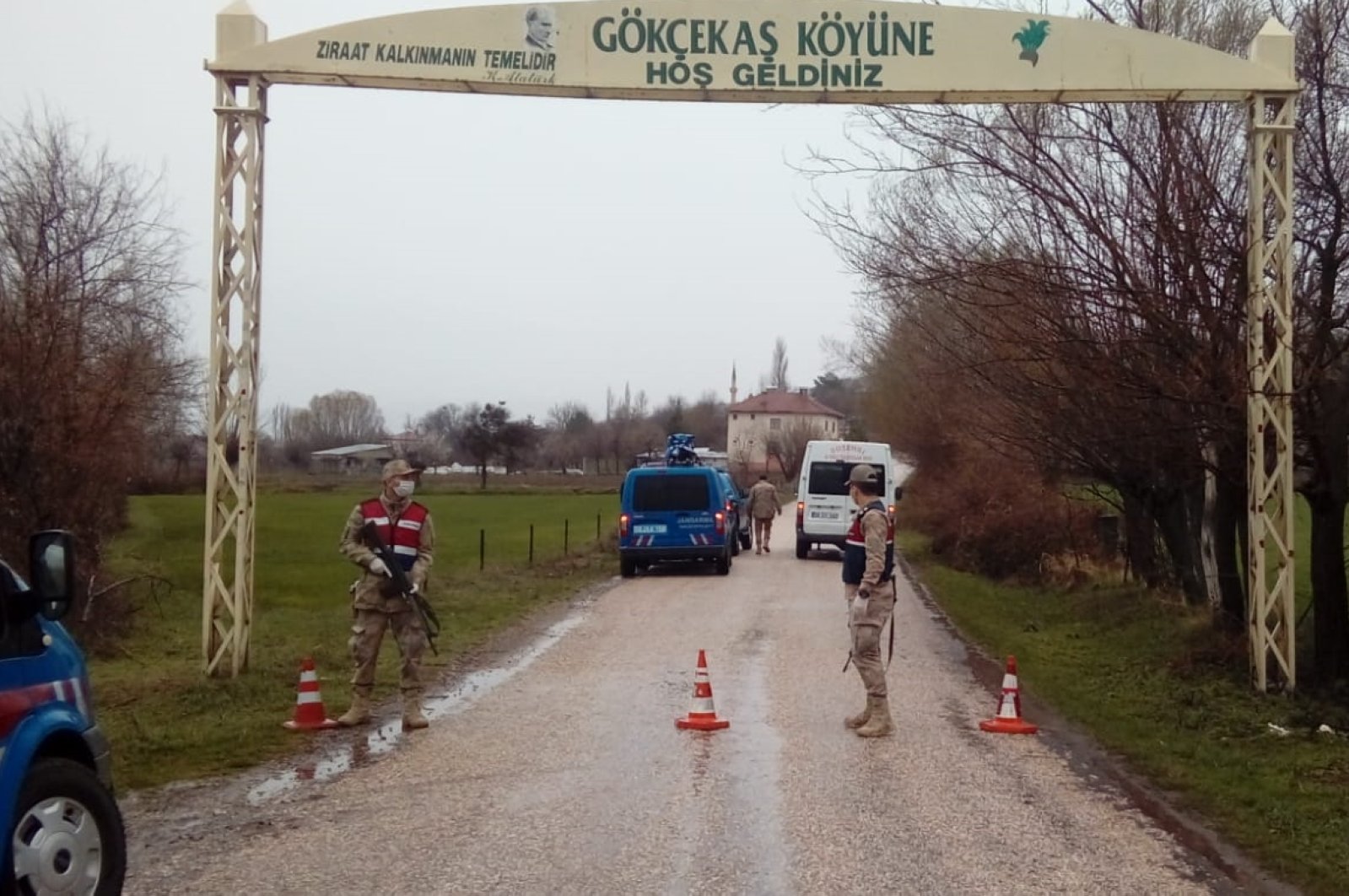 Villages and small towns may be next on the frontlines in Turkey's fight against the coronavirus outbreak. Dozens of villages were placed under quarantine since last week in 18 provinces and more quarantines are being announced every day.

Though Turkey did not disclose the location of cases so far, many are believed to be in the big cities. Yet, officials are concerned that a migration to the countryside to escape the outbreak may lead to more cases in those places.

The first case was reported in early March and most of the first batch of cases were those returning from abroad. Interior Minister Süleyman Soylu told the Turkish language daily, Yeni Şafak, on Monday that cases originating from abroad were the major risk at first but now people traveling from Istanbul, the country’s most populated city, to the countryside, are now spreading the virus.

Soylu urged Istanbulites to not leave the city. He earlier said most people in big cities were heeding the calls to stay home but social isolation was still a challenge for many in Anatolia.

The Interior Ministry announced Monday that one small town, six neighborhoods, 28 villages and four hamlets were placed under quarantine in 18 provinces.

The number of people diagnosed with COVID-19 in the country has jumped to 9,217 while the death toll hit 131, Health Minister Fahrettin Koca announced in a tweet late Sunday.

According to the Health Ministry data, 1,815 of the 9,982 most recent tests conducted returned positive for COVID-19, the disease caused by the novel coronavirus.

Twenty-three more deaths were recorded Sunday, with 568 patients reportedly in intensive care units and 394 receiving respiratory support from ventilators. Some 105 people have recovered from the disease in Turkey.

The villages under quarantine are located in the provinces of Rize, Artvin, Gümüşhane, and Giresun in northern Turkey; Van, Tunceli and Malatya in eastern Turkey; the central provinces of Yozgat, Çankırı, Sivas and Çorum, and in the western provinces of Çanakkale and Kütahya.

Security forces set up checkpoints in the quarantined areas, stopping people from entering or leaving. Authorities repeatedly issued messages through loudspeakers urging people to stay home. Health care workers also pay regular visits to houses to check on the health of locals. Ambulances staffed with doctors and paramedics wearing head-to-toe protective suits are visible in many villages while suspected cases are transferred to city hospitals. Officials did not disclose whether there were confirmed cases in the villages and small towns though at least one fatality was reported by media outlets in a village of Rize last week.

Ahmet Öztunç, a resident of Hanköy village in the eastern province of Van which has been under quarantine for the past three days, told Demirören News Agency (DHA) Monday that there weren’t any cases in their village but authorities decided to impose quarantine when a visitor from Istanbul was diagnosed with the virus.

Meanwhile, the Çankırı Governorate announced on Monday that it was isolating the village of Kamış after a member of a family who arrived in the village on March 23 from Istanbul was hospitalized with COVID-19 symptoms. The governorate said quarantine will be in place until the test results of the patient return.
Some villages have already started taking their own measures against the outbreak, like Karacaviran, a small village in the southeastern Turkish province of Adıyaman. Locals made a primitive barricade of stones on the only road leading to the village and put up a sign reading “no entry or exits because of virus outbreak.” They do not accept any visitors nowadays and are determined not to allow anyone in until the outbreak risk is over.
In Aşıklar, a village in the northern city of Rize, a narrow road leading to the village was closed to entry with an automated door. Only pedestrians who live in the village are allowed in. In Dikkaya, another village in Rize, young locals are tasked with disinfecting the village. The young volunteers spray disinfectant and give sanitizers to anyone who wants to visit the village.

Turkey also introduced some new measures over the weekend. Beaches and other park areas were closed to picnics and similar gatherings as well as to joggers. Intercity travel by bus was also banned except in cases of emergency, and those who opt to travel by bus are now required to receive permits from their governorate.

Cities also imposed strict measures to monitor those arriving and leaving. Checkpoints set up on the roads leading to Istanbul caused long tailbacks Monday. Traffic police checked the age of occupants against violation of curfew for senior citizens and examined body temperatures while buses were checked for special permits required to take from governorates as part of measures against the outbreak.

Prison staff across the country will not be allowed to leave prison as of Monday, Justice Minister Abdülhamit Gül announced Monday, as part of measures against the coronavirus outbreak. Gül said prison administrations will decide on the period of isolation for the staff who will be required to stay in isolated venues inside prison facilities. “We are considering utilizing their public accommodation. We have prepared substructure for it,” he said. Gül had previously announced that there were no coronavirus cases in the country's prisons, where about 300,000 remain incarcerated. Stressing that all hearings and nonurgent work had been delayed until April 30, the justice minister added that they also aim to halt public circulation in court bailiffs and courthouses, where a huge amount of people flow every day.

Gül also noted that the ministry would not allow the release of those who tried to exploit the pandemic through counterfeiting and spreading fake news on social media. “Investigations have been launched (in the last two weeks) into 459 people to protect public health, 385 people for spreading manipulative news, eight people for bullying elderly people (forcing them to go home) and into 55 people for stockpiling,” Gül said.

The number of those in quarantine after returning from abroad stands at 21,700, Mehmet Muharrem Kasapoğlu, Minister of Youth and Sports announced on Monday. Kasapoğlu’s ministry is in charge of student dormitories across the country where returnees are quarantined. Kasapoğlu said that along with returnees from around the world, Turkey also hosted some foreign nationals, who were stranded in Turkey when their countries halted flights over virus fears.

Some returnees who were placed in quarantine earlier this month were set to leave when their quarantine ended Monday but authorities decided to postpone it for another week when a few among them tested positive.

Though most people stay home, some view it as an opportunity to organize house parties. A house party whose video surfaced on social media over the weekend and drew ire for cramming many people in close quarters ended in court. An Istanbul court ordered four organizers of the party in the city’s Büyükçekmece district to spend two months on house arrest. Four were among eleven detained for violating measures against infectious diseases. Others were released.

The party’s videos surfaced on social media when one of the guests live-streamed it, to the chagrin of public filing complaints to police. Mustafa S., one of the organizers, told police that he was bored and decided to invite friends and said he “regretted” his decision. Elif K., who livestreamed the party, told police there were about 80 people inside the villa where the party was held.
STAY PUT FOR YOUR LOVED ONES
Newly recovered from coronavirus, the rector of an Istanbul university has a simple but powerful message to share: Stay put, for the sake of those you love and the entire world.
"Please, don't leave your homes," said Sondan Durukanoglu Feyiz, the rector of Kadir Has University in Istanbul told Anadolu Agency (AA) on Monday. "Don't think of this as being trapped at home, but think that you're together with your loved ones."
Weeks ago, Feyiz was diagnosed with COVID-19 after developing a high fever, feeling extremely cold and shaking, but now has recovered. As a university rector, she has to meet lots of people, from many places, "so it's hard to know where I caught the virus from," Feyiz said. "After these first symptoms, I started having terrible leg pains. Finally, I went to the hospital on March 13. I was certain it wasn't the ordinary flu. And I've been watching the news for days, I knew there was a possibility of COVID-19."
After taking the test for the virus, she continued, "I isolated myself in the attic of our house. We started the treatment while waiting for the test results. When I first heard I was positive, I was shaken. I knew how serious the situation is. But all data shows that 80% of those testing positive for COVID-19 recover from the illness with mild symptoms. I eat well, I exercise two or three times a week and have no chronic illness, so I thought I could be among this 80%."
Her husband started showing symptoms the next day, but not her son. Later, though, her son also tested positive, but without any symptoms. Feyiz said her husband has recovered from the virus and her son is also in quarantine. "We keep our social distance, my son is in a different house. We keep eating healthy and sleeping regularly."
Feyiz said it is very important to not take medicine without consulting a doctor, warning that if used irresponsibly, such drugs "could have fatal consequences." "Along with the medicines, I took vitamins B and C every day. I would like to thank all health personnel in Haseki Hospital in Istanbul. We really can't pay our debts to health officials," she said.
Feyiz pleaded with everyone to stay at home, "Especially young people, just like my son, you might be carrying the virus and endangering other people's lives. Please, stay at home, and keep your social distance. Exercise and eat well. Most importantly, keep learning something new." She said keeping good morale is one of the key weapons in fighting the virus. "We should never lose hope. We shouldn't focus on bad scenarios only. We should still take all precautions, but keep morale high," she urged.