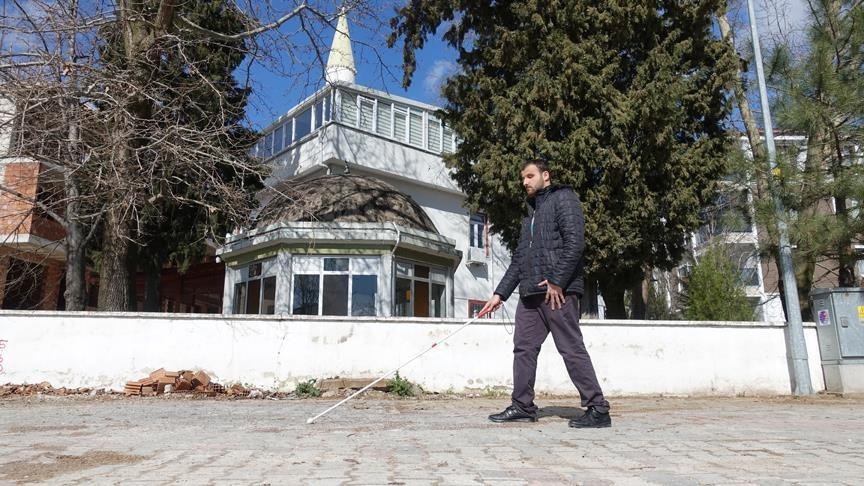 Accessibility options improved in recent years, but life is still full of obstacles for the visually impaired in Turkey. White canes, a retractable walking tool, are helping them to better adapt to daily life. The country marks White Cane Week, which is devoted to the blind between Jan. 7 and Jan. 14 every year.

White canes can come in different colors in different countries, but the idea of a cane distinguishing the visually impaired and helping them to find their way around dates back to 1921. James Biggs, a British photographer who went blind after an accident, painted his walking stick white to be able to go through traffic around his home. It soon spread to other countries, and sticks were improved over time while training methods on how to use them were developed in the United States.

Nejla Sümer, who heads the White Moon (Beyazay) Association, which focuses on the visually impaired, says they offer training on using white canes and how to move independently to blind children. The Istanbul-based group switched to online teaching due to the pandemic while its rehabilitation center in the city shows how to properly use the cane. “It is a tool facilitating their life. They can go around without company, without someone holding their arm,” Sümer told Anadolu Agency (AA) on Thursday. The association delivers free canes and tablet computers to children that complete their training. Beyazay is one of the largest associations for the blind with more than 10,000 members, and its branches also offer Braille writing and computer literacy classes.

“Education for visually impaired children needs to be started at an earlier age. As soon as they learn reading and writing, we enroll them in computer classes. Though children can achieve on their own, it is important to have parents supporting them to boost their success,” she said.

Sümer notes that apart from birth defects, a considerable number of people, “up to 10 million in the world,” have lost their sight despite preventable circumstances. “Regular eye examinations are critical to curbing the majority of eye diseases. It should be done immediately after birth, at 6 months, at the age of 3, when the children start school and once in every year while they are at school,” she says.

Aycan Demirbaş, a fifth-grader at a school for visually impaired children, is among those trained in the white cane program. The 11-year-old switched to online classes, but she does not complain. “I learned how to use a computer and took music classes too. But learning how to use the cane changes your life. All visually impaired people should learn it. I can’t go out much because of the pandemic, but I dream of going everywhere with my cane,” she says.