With more than 2 million tests done, no sign of 2nd COVID-19 wave in Turkey 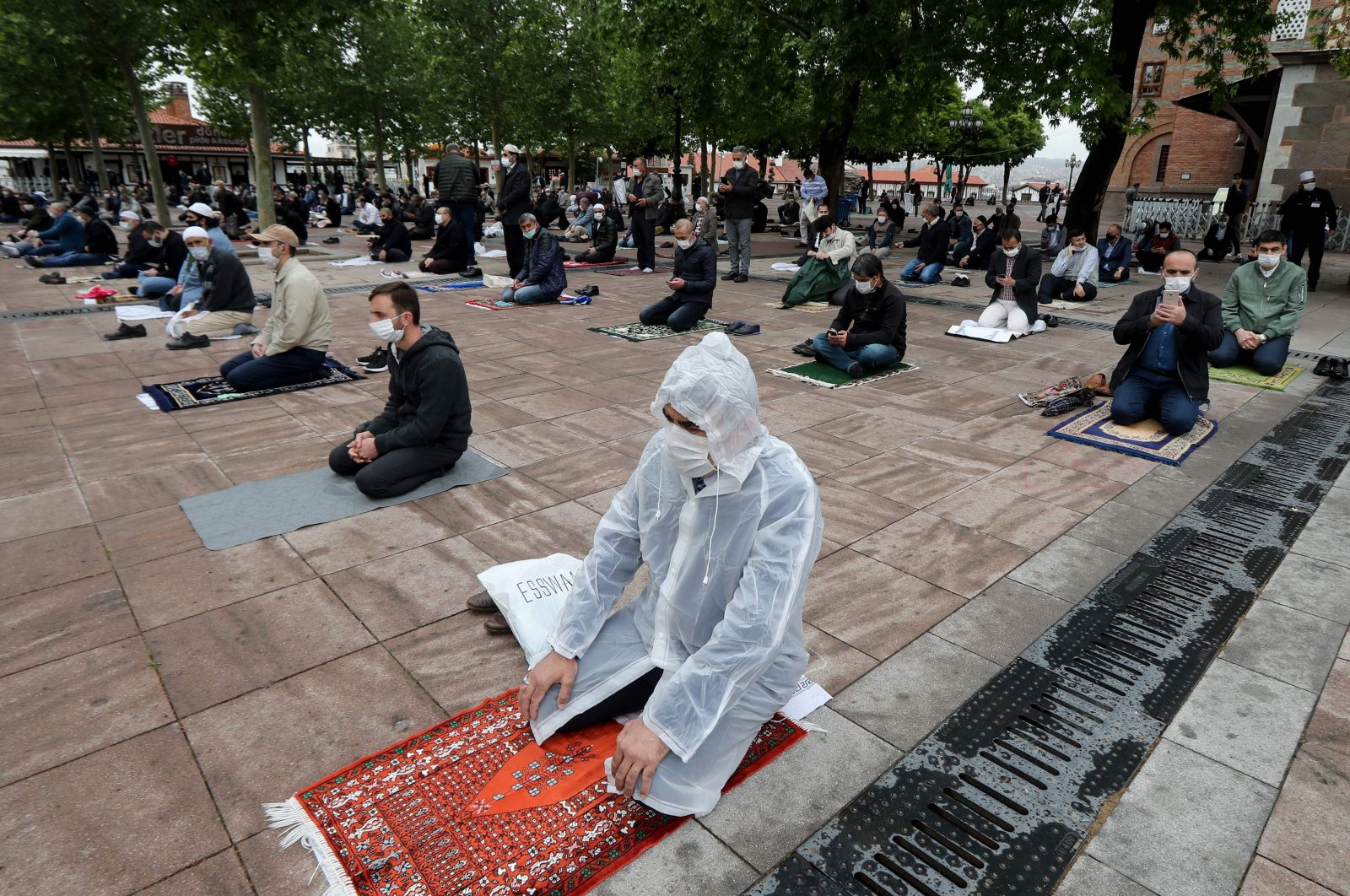 Worshippers wearing protective face masks maintain a required social distance during the Friday prayer outside the historical Hacı Bayram Mosque, in Ankara, Turkey, May 29, 2020. (AFP Photo)
by DAILY SABAH WITH AGENCIES
May 31, 2020 3:07 pm

A much-feared second wave of COVID-19 infections appears to have been avoided for the time being as case numbers continue their downward trend, with the number of tests carried out exceeding 2 million

As Turkey takes the biggest step toward returning life to normal with dozens of restrictions lifted as of Monday, it appeared that the worst fear of health experts – a second wave COVID-19 outbreak – did not come to pass yet, as the number of new patients continued to decline despite a steady number of tests carried out.

According to the minister, the number of patients who recovered from the disease reached almost 127,000 as 1,021 more were discharged from hospitals over the past day, while the number of total cases in the country reached 163,101 with 983 new cases.

Meanwhile, the death toll from the outbreak rose to 4,515 with 26 new fatalities.

“What lies in the upcoming days depends on how much importance we pay to wearing a mask, keeping our hands clean and practicing social distancing,” the minister warned.

Koca’s warning was his latest in a string of previous ones – both from him and other authorities – to remind citizens that the easing of restrictions did not mean the threat of the coronavirus was over.

The warnings were repeated increasingly over the past few days as President Recep Tayyip Erdoğan on Thursday announced the country’s biggest rollback on the coronavirus measures with the declining case numbers.

As of Monday, 15 worst-hit provinces came out of one last curfew with weekend stay-at-home orders being abandoned for the time being. All intercity travel restrictions were lifted as well, with only citizens aged 65 and above being required to obtain a special permit for travel, as they are still under a curfew due to being the highest at-risk group.

The green light to reopen many public places was the latest phase of Ankara’s plan to return life to normal. The government previously ordered barbers, beauty salons and shopping malls to reopen with limited capacity. Friday also saw the faithful returning to mosques for communal prayers after being banned on March 16.

While Turkey has so far avoided a second wave of the outbreak with figures indicating the downward trend in new cases will continue, experts warned that the new measures could spell doom if citizens get lax on following official advisories.

While restaurants and cafes were ordered to put certain distances between tables or other indoor places were required to operate in a reduced capacity, one expert said the riskiest places were office buildings.

As he announced the rollbacks on Thursday, President Erdoğan also said public workers would be returning to their regular working hours as of Monday.

And with the public sector reverting back to normal shifts, the private sector followed as well, with many companies requesting their employees to return to offices.

“If companies don’t have the necessary area or big enough offices, requesting every employee to return to the office at the same time wouldn’t be the right policy. It would be endangering everybody at the office,” said Selma Karabey, a professor of public health.

Speaking to Anadolu Agency (AA), Karabey said companies should take a slow but steady approach as they return to normal, ideally preferring rotating shifts as well as allowing employees to work from home.

Office spaces are a major cause of concern not only for health experts but employees themselves, as many of the offices are located in high rise buildings where ventilation is carried out with air conditioning (AC) instead of open windows.

While the pandemic began in winter where AC units were turned off due to already cold weather, the arrival of summer and potential to return to offices has cast doubt on the use of the devices.

Experts warned that AC units without proper filters or maintenance could circulate the virus in the air, carrying virus-filled droplets further than they could travel on their own.

Turkey’s Coronavirus Science Board in May issued an advisory, urging authorities to shut down AC units in indoor spaces and transport vehicles and rely on open windows or ventilation systems to circulate fresh air from outside.

But for offices in skyscrapers where windows only partially open, the safest approach is rotating shifts, Karabey said, adding that an equally divided workforce would also mean less crowded mass transit vehicles and therefore reduced risks.

Regarding the adaptation to the new normal in daily life, the professor said people have begun to feel tired from living with so many precautions and that it was perfectly understandable, but she warned that citizens have to adapt to this new reality.

“It is very dangerous to live as if nothing happened and try to return to what life was before the outbreak, beginning June 1. This process will take time,” she said.