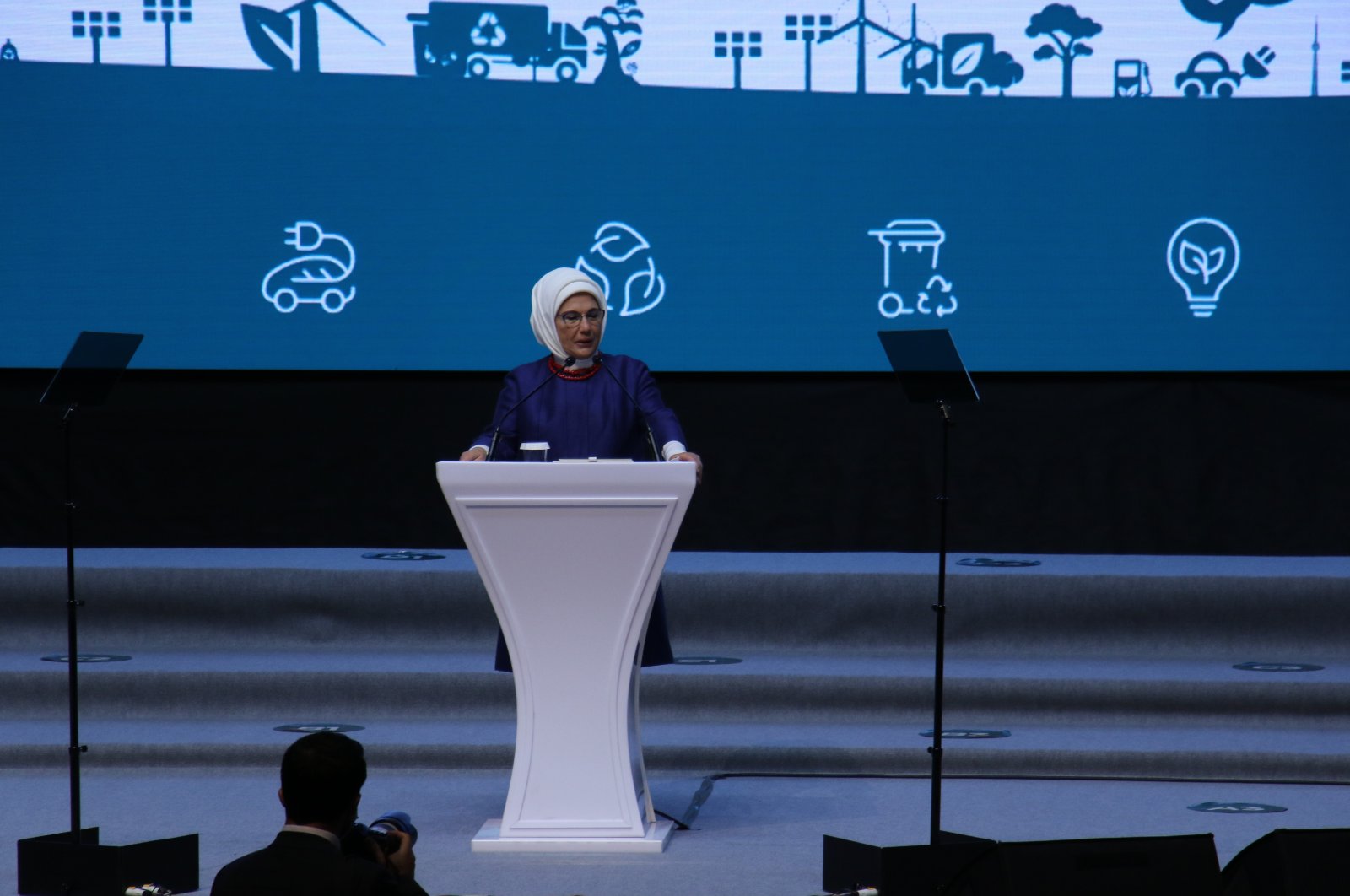 First lady Emine Erdoğan speaks at an event organized by the Ministry of Environment and Urban Development and Union of Municipalities of Turkey in the capital Ankara, Turkey, Oct. 27, 2020. (İHA Photo)
by DAILY SABAH
Oct 27, 2020 3:18 pm

Once a neglected concept, recycling has now gained a foothold across Turkey in recent years. This is in large part thanks to the efforts of the Zero Waste campaign. On Tuesday, 30 municipalities that successfully adopted the practice were recognized.

Championed by first lady Emine Erdoğan, the concept spread across public institutions first and the private sector followed. In three years since it was launched, the project saw the recycling of tons of recyclable materials. On Tuesday, Erdoğan attended the awards ceremony in the capital Ankara, organized by the Ministry of Environment and Urban Development and Union of Municipalities of Turkey (TBB).

Exemplary projects submitted into a competition by TBB and the ministry includes undertakings that collect waste from the sea, the door-to-door pickup of recyclable waste and production of compost from recycled materials.

Speaking at the event, Erdoğan said the project has come a long way since 2017 and has drawn huge interest from the public. She stated that the ongoing coronavirus pandemic worsened the pollution problem, especially with the haphazard dumping of masks and plastic gloves used as protection against the disease. “Plastics already make nearly 80% of pollutants in the bodies of water in the world. Now, we have masks and gloves in addition to other plastic pollutants. Scientists warn that 75% of masks and gloves will be floating, filling landfills and waters without measures,” she warned.

The first lady urged the public to be more careful while discarding used masks and gloves and noted that the government already warned for their disposal separately from other waste. “Unfortunately, masks thrown randomly on the streets and even at sea have become a common sight,” she lamented.

Erdoğan said the municipalities have an important task in zero waste efforts, for the sustainability of recycling. “You are the ones who will explain to the public that zero waste policies are not a lifestyle choice but an obligation,” she told mayors attending the event. “Please reach out to children. We know children are more inclined to adopt to such values earlier than grownups,” she said.

The Zero Waste campaign aims to promote the efficient use of finite resources, to curb and eliminate waste by separating it at the source for recycling. The presidential complex was the first to switch to a zero-waste scheme and it was followed by ministries. Since 2017, thousands of public buildings joined the campaign with recycling almost all the waste they produce, from paper to food. Aside from the environmental benefits, the project looks to save the country around TL 20 billion ($2.45 billion) annually and create jobs for 100,000 people by 2023, according to projections. The country seeks to increase its recycling rate from 13% to 35%.

Speaking at the awards ceremony, Minister of Environment and Urban Development Murat Kurum said municipalities in all cities and towns will complete a switch to the zero waste system by the end of 2022. Kurum said the scheme has been set up in 49,000 buildings so far. “We save billions of liras with our zero-waste buildings. Millions of tons of waste are recycled and tons of maritime waste is eliminated. We also reduced the use of plastic bags, the biggest environmental pollutant, by 80%,” he said. A ban on plastic bags distributed freely everywhere, from supermarkets to department stores, was implemented in January 2019. Businesses now charge TL 0.25 for each unit. Since the ban, many customers turned to canvas bags instead of plastic ones.

Kurum said that with their efforts, 9 million people, including 6 million students, were educated on recycling and they were happy to see children adapting to recycling.

In recent years, Turkey has started to prioritize waste management over concerns of rising environmental damage, with municipalities responsible for garbage collection upgrading their collection systems.

Earlier this month, a draft bill was approved by a parliamentary committee for the establishment of an environmental agency that will better coordinate recycling efforts. Turkey uses about 20 billion cubic meters of glass, plastic, aluminum and metal packaging every year according to figures and plans to increase the recycling rate for packaging to 90%. The bill also introduces fines for those caught littering in public spaces and businesses that fail to engage in a nationwide recycling system based on the country’s zero-waste policies.