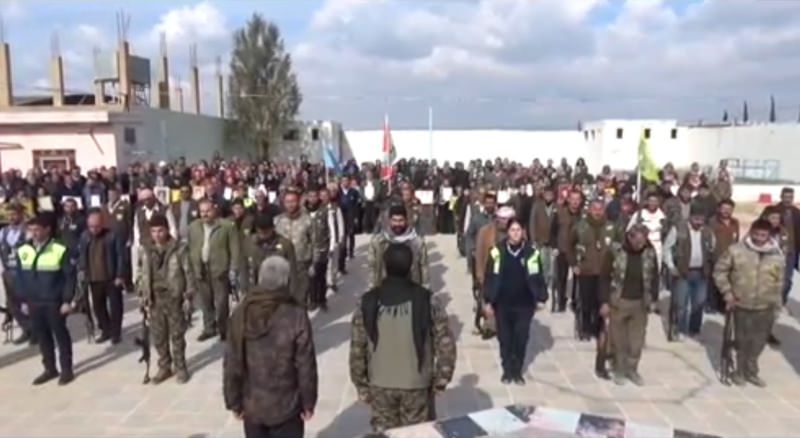 What Turkey has been trying hard to tell the U.S. and the West in general that there can be no "good terrorist" proved true once again with a video in which militants of the PKK's Syrian wing PYD show their real faces.

In the video recorded in Syria's PYD-controlled Amude, the hometown of Saleh Najer who is the perpetrator of the second Ankara bombing that took place on Wednesday, a group of armed YPG militants are seen lined up in single files, apparently before a training session. The commander, speaking to the terrorists, is heard shouting slogans and uttering threats against Turkey in an attempt to provoke Kurdish people living in southeastern Turkey.

"As the people of Amude, from now on, we will defend the rights of our people, using every means available as Asayish, YPG, YPJ and HPJ," he says in the video.

"Our people are the same, we don't recognize any borders or boundaries. Amude is Nusaybin, Cizre, Diyarbakır. We will abolish the rotten borders," the commander adds, vowing unity with PKK terrorists living in Turkey.

"We will defend the rights of our people in the North [in southeastern Turkey]. With our people in Western and Northern Kurdistan, we will make [President Recep Tayyip] Erdoğan drown in his own blood," he pledges, adding that the PYD will "try" the President.

In the end of the video, the militants shout "Serok Apo" that means "Leader Apo," paying homage to the PKK leader Abdullah Öcalan, who has been serving a life sentence in İmralı Island in the Marmara Sea since 1999 when he was captured by Turkish security forces in Kenya.

In January, another video had emerged in which an English-speaking man, believed to be a fighter from the YPG, making a call for Westerners to join the ranks of the armed group and conduct terrorist attacks against the Turkish state.

The footage showed the man, with his face covered by a scarf andhis rifle leaning on his leg, while he makes a statement to a group gathered around him, urging Kurds and Westerners to arm against the Turkish state. Beside the man also stands other western PYD members who are, reportedly, part of the PYD's international unit.

"Attack the institutions of the Turkish state all over the world. Come to Kurdistan and join the forces of the YPJ (women's branch of the YPG), YPS (the newly formed armed wing of the YPG in Turkey) and the guerrillas," the man says in the video.