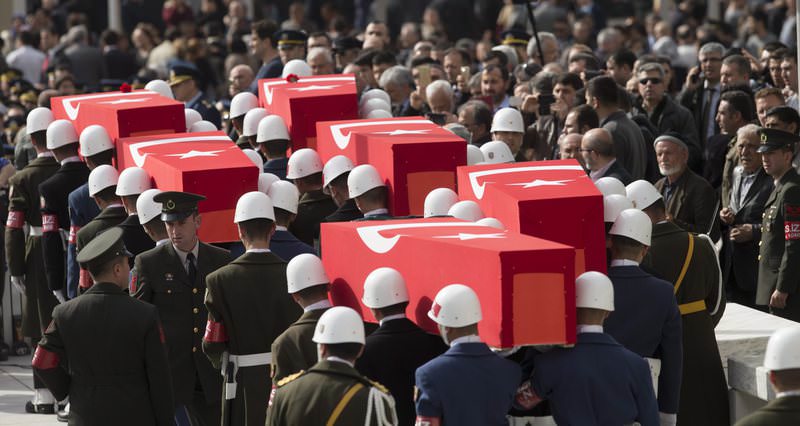 by Daily Sabah Feb 20, 2016 12:00 am
Turkey's Deputy Prime Minister Yalçın Akdoğan said Friday that the perpetrator of the Ankara bombing, which killed 28 people on Wednesday had direct links with the PYD/YPG and the bomber's relation with the terrorist group/groups was proven and closed to speculations.

Earlier on Friday, a terrorist group linked to the PKK terrorist organization named as the Kurdistan Freedom Hawks (TAK), often commented as a hardliner wing, has claimed responsibility for an attack in the Turkish capital Ankara.

Speaking in a live Interview on NTV news channel, Akdoğan said whenever a terror incident receives wide reaction, offshoot terror groups like TAK claim the responsibility. The minister added that the bomber has been identified and the ministers are to make the necessary statements about the attack.

In a statement posted on its website, TAK said it carried out the bomb attack to avenge Turkish military operations against PYD/YPG targets in southeast Turkey and the bomber was a TAK member from the eastern city of Van.

However, the image in the statement purportedly belonging to the Ankara bomber was later claimed to be a photoshopped image which originally is a photo of a Turkish man named M. Şafak İnan who wrote an article on Turkish websitesechaber.com.tr on May 22, 2013. The TAK's statement provides no further claim that can be considered as a proof that they actually conducted the attack.

Turkish authorities, however, have repeatedly said that they have found evidences about a clear link between the bomber and the PYD/YPG group.

The officials said that the attack was carried out by a Syrian national named Saleh Nejar (24), who was born in Syria's Hasakah province. Turkey have detained a total of 20 suspects in simultaneous operations carried out throughout the country.

TAK's claim of responsibility was widely regarded as an attempt to divert the attention on PYD/YPG, and future measures that Turkey is getting ready to take against the group which it considers a grave threat to its national security.

On Friday, President Recep Tayyip Erdoğan spoke with his American counterpart Barack Obama on the phone, and during the conversation the bomb attack was also covered. Obama told Erdoğan that he called on the PYD/YPG to immediately stop its provocative acts that creating tensions with Turkey and Syrian opposition and undermining the fight against Daesh, the Turkish presidential sources said.

Turkey considers PYD/YPG as a terrorist organization, and the group is largely accepted as the Syrian wing of the PKK, which is recognized as a terror organization by the U.S., the EU and NATO.