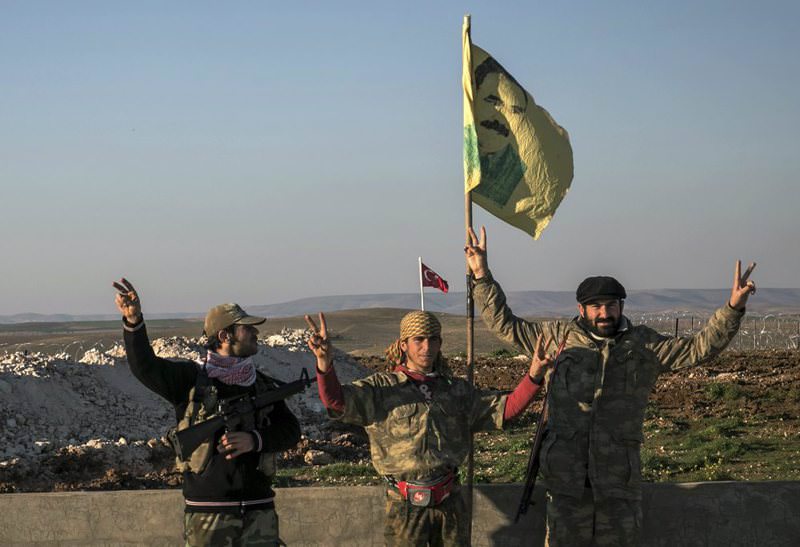 In this file photo, YPG militants are seen next to a drawing of jailed PKK leader Abdullah u00d6calan in Esme village of Aleppo province, Syria.
by Fatih Şemsettin Işık Feb 22, 2016 12:00 am

Even though the U.S. insists on not calling the PYD and its armed wing YPG terrorist organizations despite Ankara's warnings, the NCTC, a body the U.S. government, described the PYD as the PKK's Syrian offshoot

The United States National Counterterrorism Center (NCTC), which is the primary organization in the U.S. government for integrating and analyzing all intelligence pertaining to terrorism possessed or acquired by the U.S. government, describes the Democratic Union Party (PYD) in Syria as the Syrian affiliate of the terrorist PKK-KONRA-GEL (KGK), belying the Obama administration's insistence that they are separate organizations.

The 2014-dated document says that the PYD's presence in Syria along Turkey's border "result[ed] in concerns of a heightened threat to Turkey and increased tensions along the border."

Furthermore, it is still debated why the institution removed mention of the PKK-affiliated group in the 2016 version of the document, without offering any official explanation.

While Washington continues to ignore the close links between the PYD and the KGK, which is recognized as a terrorist group, a detailed document on the NCTC's public website clearly outlines the relationship and merges all the groups under the terrorist KGK umbrella.

The document also mentions that five KGK leaders were listed under the Kingpin Act in April 2011, "freezing any assets they may have had under U.S. jurisdiction and prohibiting U.S. citizens from conducting financial or commercial transactions with them." 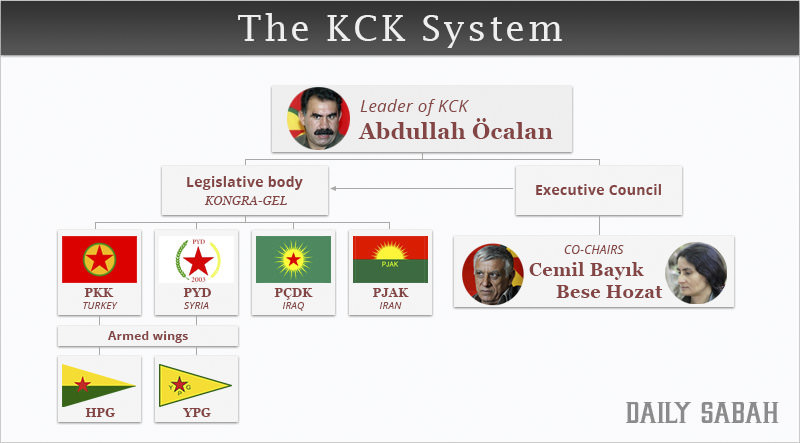 Hierarchy of terror: KONGRA-GEL is designated by the PKK as the legislative arm of the Kurdistan Communities Union (KCK), an umbrella organization headed by the jailed leader of the PKK Abdullah Öcalan. The PKK and its Syrian, Iraqi and Iranian wings are united under KONGRA-GEL, which the U.S., EU and Turkey recognize as a terrorist group.

According to documents published on the U.S. Treasury Department website on April 20, 2011, the institution "announced the designation of KONGRA-GEL founders Cemil Bayık and Duran Kalkan and leaders Remzi Kartal, Sabri Ok and Adem Uzun as Specially Designated Narcotics Traffickers (SDNTs), pursuant to the Foreign Narcotics Kingpin Designation Act (Kingpin Act)." It also refers to several kidnappings conducted by the KGK, including the abduction of a parliamentarian.

Former Tunceli deputy of the main opposition Republican People's Party (CHP), Hüseyin Aygün, was kidnapped by PKK terrorists in August 2012 and was held for two days.

While such U.S.-based documents continue to reveal that the PYD - defended and backed by the U.S. and Russia in the anti-DAESH fight - cannot be separated from the PKK, the country is still insistent on ignoring the fact, causing relations with Turkey to sour. Ankara asserts that the PYD is affiliated with the PKK, a designated terrorist organization by the U.S., EU and NATO, although Washington does not share Ankara's concern and continues arming the group.

The U.S. provided arms to the PYD in October, which drew heavy criticism from Ankara. The U.S. air force dropped 50 tons of arms and ammunition to the PYD in the north Syrian province of al-Hasakah. The 112 pallets reportedly contained ammunition for M-16s and AK-47s.

Eyüp Ersoy, a security expert from the Department of International Relations at Bilkent University, stressed that during the closing stages of a civil war, interested outside parties will begin a race to parcel out the local groups and because Washington was late in winning over a proxy group in Syria due to the limited scope of its strategy, it had to eventually come to terms with the PYD, which Turkey classifies as a terrorist group.

"If this [U.S.] tendency continues, one must expect the U.S. administration to take measures to increase the legitimacy of the PYD, both on the ground and at the negotiation table. In the near future, it is almost certain that the Syrian civil war will pose a huge challenge to U.S.-Turkey relations and will create a breach in their alliance."

Yet, Washington's support for the PYD, even by being not concerned about the supplied weapons being fired at Syrian opposition like in Aleppo or Turkish security forces in Turkey's southeast, "will not create peace or stability but ensure constant tension," Basheer Nafi, a senior research fellow at Al Jazeera Centre for Studies said in his article in Middle East Eye.

He said: "Washington's silence vis-à-vis the Russian intervention and its collaboration with the Kurdish militias are mere details within a bigger strategic framework: the maintenance of a Sunni–Shia balance within the region."

Relations between the KGK and the Kurdistan Freedom Hawks (TAK) terrorist group have resulted in the former providing the KGK "with plausible deniability for the attacks," the NCTC document further stated.

Designating TAK as the KGK's urban terrorism wing, the document states that the terrorist group began its attacks in 2005 targeting "Turkish tourist destinations in order to damage the Turkish economy," which included suicide bombings.