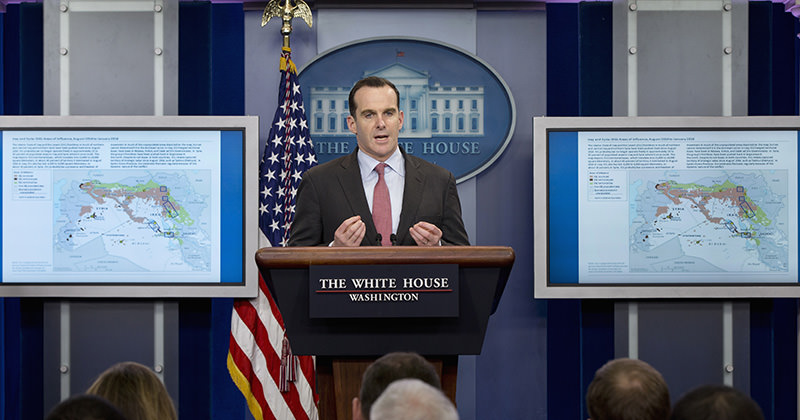 Flanked by maps of Iraq and Syria,u00a0Brettu00a0McGurk, speaks during the daily news briefing at the White House in Washington (AP Photo)
by Daily Sabah with Agencies Feb 24, 2016 12:00 am
A top Obama administration official praised Turkey's contribution to the drop in ranks of Daesh foreign fighters to about 25,000 from a peak of 35,000.

Speaking to reporters at the White House at a press briefing, the U.S. special envoy for the global coalition to counter Daesh Brett McGurk said that Turkey is doing a very good job at controlling its borders to stem the flow of foreign fighters.

He noted that fighters from 120 countries have joined the terrorist group.

He continued by saying that Turkey is one of the primary partners in the fight against Turkey.

''We can't succeed without Turkey'' he said.

McGurk touted progress in the U.S.-led effort to defeat Daesh. He said the terrorist group is under pressure and has cut fighters' salaries by about half.

President Barack Obama is expected to get an update on diplomatic and political efforts Thursday at the State Department, the envoy said.

The meeting comes after the U.S. and Russia announced a cease-fire agreement for Syria to take effect later this week.

McGurk added that the U.S. is under no illusions about how difficult implementing the cease-fire will be.

McGurk also said that activity in Libya was particularly concerning to the United States, which carried out air strikes last Friday against a militant training camp in the country. The facility was linked to a militant blamed for attacks in Tunisia last year.


Turkey has been doing its part to identify and stop potential foreign fighters seeking to cross the border to Syria to join Daesh, despite little cooperation in intelligence sharing with its Western allies.


As part of Turkey's efforts, police have tightened security at transfer points such as airports, terminals, bus stations and rental car companies.


The police have done so by employing a special risk analysis system and a team tasked with tracking suspicious foreigners who travel to Turkey for the first time and minors who have not made hotel reservations.