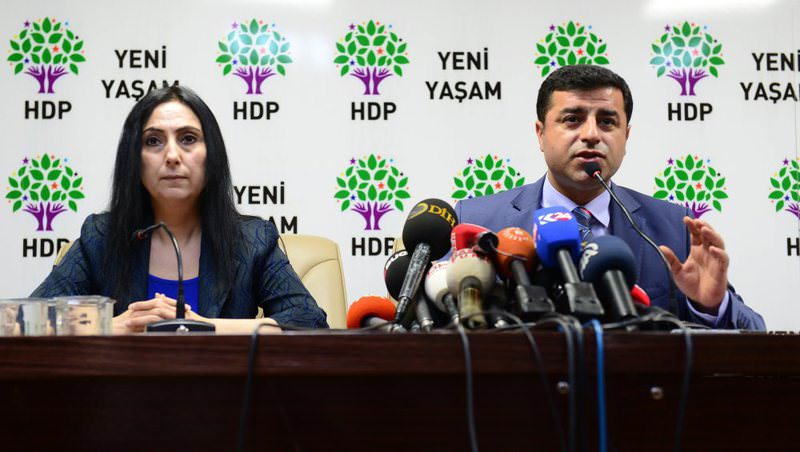 HDP Co-Chairs Yu00fcksekdau011f (L) and Demirtau015f at a press conference. The two deputies could face lawsuits if Parliament lifts their immunities on March 22.
by Yunus Paksoy Mar 11, 2016 12:00 am

Following remarks and actions that defy the Turkish state, threaten national security and support the PKK, five deputies from the pro-Kurdish HDP could face legal actions if Parliament votes to lift their immunity on March 22

Five deputies from the Peoples' Democratic Party (HDP) accused of siding with the PKK terrorist organization through remarks and actions may face legal action in the upcoming period, should Parliament decide to lift their immunities on March 22. Legal proceedings against HDP co-chairs Selahattin Demirtaş and Figen Yüksekdağ, İzmir deputy Ertuğrul Kürkçü, Ankara deputy Sırrı Süreyya Önder and Hakkari deputy Selma Irmak, have been recently submitted to Parliament, and the motion to lift their immunities will reportedly be brought to Parliament's agenda on March 22. The Turkish public seems increasingly frustrated with the HDP and its deputies defending the PKK's terrorist acts, according to recent polls.

The party has long been accused of failing to distance itself from the terrorist organization. Having gained a decent image in the eyes of the public before the June 7 elections with the pledge to be "the party of the whole of Turkey," the HDP's image is now in tatters.

With approval ratings now falling way below 10 percent, which is the national election threshold in Turkey, compared to the unprecedented 13 percent it won in the June 7 elections, the HDP is considered to be paying the price for not standing up against PKK terror.

After the PKK unilaterally returned to armed struggle in July 2015 and turned urban areas in southeastern Turkey into battlefields, the HDP was expected to condemn the PKK's strategy and fulfill its commitments.

HDP Co-Chair Demirtaş in September questioned counterterror operations, saying: "What will you solve by bombing all provinces, just because a few youth took up arms?" He was quickly rebuffed in the media and public due to his alleged justification of youngsters carrying weapons on the streets.

Demirtaş has called for uprisings in the southeastern parts of Turkey many times. In an attempt to make Kurdish people in the region riot against the Turkish state in the face of terror operations against the PKK, Demirtaş attempted to call people to the streets. His calls have found little support.

The other co-chair, Yüksekdağ, also drew heavy criticism for her alleged pro-PKK stance with her remarks. "We lean our backs on the YPJ [Women's Protection Units], YPG [People's Protection Units] and the PYD [Democratic Union Party], and we do not see any harm in mentioning and defending it," she said in July. The PYD and its armed wing YPG are affiliated with the PKK. In addition, the two are reportedly commanded by PKK leaders. Turkish capital Ankara was recently hit by a suicide bombing attack carried out by Abdülbaki Sömer, who fought in YPG ranks in Syria.

Yüksekdağ also praised the PKK and described it as "a national liberation movement and also an organization that stands for democracy and equality." A parliamentarian labeling an organization that targets security forces and civilians democratic and an advocate for equality drew ire in the public.

HDP İzmir deputy Kürkçü is another party member that abstained from reprimanding the PKK violence. PKK terror attacks on Turkish security forces are not "a matter for condemnation," Kürkçü said in a live broadcast on BBC World in August.

Ankara deputy Önder threatened Turkey with war on the grounds of concerns with the security and health of imprisoned PKK leader Abdullah Öcalan at a press conference in Parliament early January. "Imposing isolation on Öcalan and making his people, as well as his organization, worry about his security and health mean an invitation to war," Önder said.

The motion to lift HDP deputy Tuba Hezer's immunity is expected to reach Parliament in the upcoming period. Hezer attended a condolence ceremony held for the Ankara suicide bomber, for which she was harshly criticized. The chairmen of the Justice and Development Party (AK Party), Republican People's Party (CHP) and Nationalist Movement Party (MHP) all condemned Hezer, calling her actions treason. The HDP, however, rejected to co-sign a declaration that condemned the suicide bombing and did not launch an investigation into the deputy.

HDP Şırnak deputy Faysal Sarıyıldız was accused of supplying arms to the PKK in July 2015. He also late January reportedly attempted to entrap security forces in the Cizre district of Turkey's Şırnak province, claiming that "30 people have been wounded in the basement of a building and cannot reach an ambulance." The claim proved to be a hoax in the end, allegedly made up in order for security members to fall into a trap.

HDP Hakkari deputy Irmak, whose immunity may be lifted, attended a PYD congress late September along with HDP Şanlıurfa deputy Dilek Öcalan, who is a niece of the jailed PKK leader Abdullah Öcalan. Messages from PKK leaders were read loud during the congress as well.

Southeastern municipalities administered by the HDP and the HDP's regional affiliate Democratic Regions Party (DBP) have been accused of aiding and abetting the PKK's urban war strategy. Heavy equipment belonging to the municipalities were put at the disposal of PKK terrorists, according to reports.

According to a report released by Van Police Department, covering the period between Aug. 9 to Aug. 18, 20 cell batteries, 100 kilograms of ammonium nitrate and other chemicals used for bomb making were found in a truck belonging to Van Municipality.

There have recently been claims that municipalities administrated by the HDP provide assistance to the PKK by digging trenches and establishing roadblocks to claim control over cities. In Siirt province, the HDP municipality reportedly dug up the roads to enable PKK terrorists to plant mines, and paved it afterwards so that the PKK could detonate the mines when vehicles belonging to the Turkish Army passed by.

'TERRORISTS OR DEPUTIES?'Justice Minister Bekir Bozdağ recently commented on the legal proceedings against the five deputies and their aforementioned actions. "Are you a terrorist or deputy that represents the nation?" Bozdağ asked, in reference to Sarılyıldız's actions in the Cizre district of Şırnak. He also asked what Sarıyıldız was doing with terrorists that fire bullets at the Turkish state.

"All these are not tolerated by the Constitution and laws. No one can or should see the parliamentary immunity as the right or freedom to commit crimes," Bozdağ added.

President Recep Tayyip Erdoğan has been very vocal on the issue. He repeatedly called for necessary legal action against the deputies, saying: "Necessary steps should be taken at once by political parties against those entering Parliament but spreading terror in it."

The president had also said early January that the parliamentary immunity of Demirtaş and Yüksekdağ should be lifted, which would give a boost to counterterror operations. He rejected however the idea of closing the HDP. "Closure of the party [HDP] should not even be brought to agenda. However, a deputy, mayor or others who commits crimes must pay the price for them," said Erdoğan.