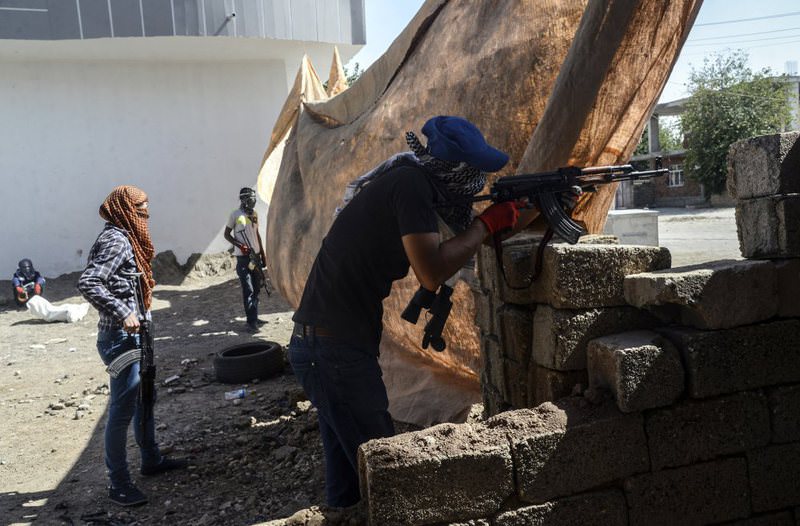 PKK terrorists stand behind a barricade of concrete blocks in the Bismil district of Diyarbaku0131r.
by Daily Sabah with AA Mar 12, 2016 12:00 am

In the security operations that is continuing since December, security forces have killed 1,220 terrorists and destroyed 3,105 explosives together with 2,287 ditches and barricades, figures released by the TSK showed

A total of 1,220 terrorists have been killed since early December during the longest-running anti-terrorism operation in southeastern Turkey, according to Turkish Armed Forces (TSK) figures released on Friday. Fifteen terrorists in the Silvan district and 274 in the Sur district, both in the province of Diyarbakır, and 666 terrorists in the Cizre district, 120 in the İdil district and 145 in the Silopi district, all in the province of Şırnak, have been killed since operations against the PKK began. The PKK is recognized as a terrorist group by the EU and U.S.

A total of 1,220 terrorists have been killed since early December during the longest-running anti-terrorism operation in southeastern Turkey, according to Turkish Armed Forces (TSK) figures.

A total of 3,105 explosive devices that were planted on streets, gardens and houses have been defused since the operations began.

A total of 24 explosives in Silvan, 365 in Sur, 1,425 in Cizre, 461 in İdil, and 830 in Silopi were defused during the operations. Many armor-piercing weapons as well as rifles, heavy weapons, rocket launchers, ammunition, handmade explosives and grenades were also seized in the operations.

After the successful operations, the two districts of Nusaybin in Mardin and Yüksekova in Hakkari will also undergo operations soon, Turkish media reported.

According to a report published in the Türkiye daily on Tuesday, security forces have prepared for a new wave of anti-PKK operations in these two districts. Nusaybin will be first, where around 1,000 ditches and barricades have been dug and erected by almost 350 terrorists, as indicated by an intelligence report offered to the government.

Security operations will shift to include Nusaybin and the Yüksekova to cut supply routes for PKK terrorists using underground tunnels from Syria. Tunnels allow the PKK and its Syrian affiliate the Democratic Union Party's (PYD) People's Protection Units (YPG) militia to cross the border from the town of Kobani in Syria.

"We have pregnant women, children whose vaccinations should be followed up on, patients who need to receive dialysis treatment and those need to have their medical service at home such as those with chronic diseases like cancer. We need to conduct dynamic work in order to follow up on those patients in the new conditions."

Crippling social life, PKK terrorists are also a menace to medical workers in the region. During an operation in Cizre in January, security officers discovered that a home under PKK control was turned into a makeshift hospital using materials seized from ambulances after using false requests for medical help.

On Nov. 9, terrorists allegedly fired a mortar at a hospital in Cizre during an attack on a police vehicle near the building. The violence comes after an attack on Oct. 22 when PKK militants used a car bomb planted in an area to attack a hospital in Şemdinli, a district in the southeastern province of Hakkari.

A doctor in Diyarbakır was killed after terrorists blocked a road between the Kulp and Lice districts in Diyarbakır on Sept. 1 and opened fire on his vehicle.