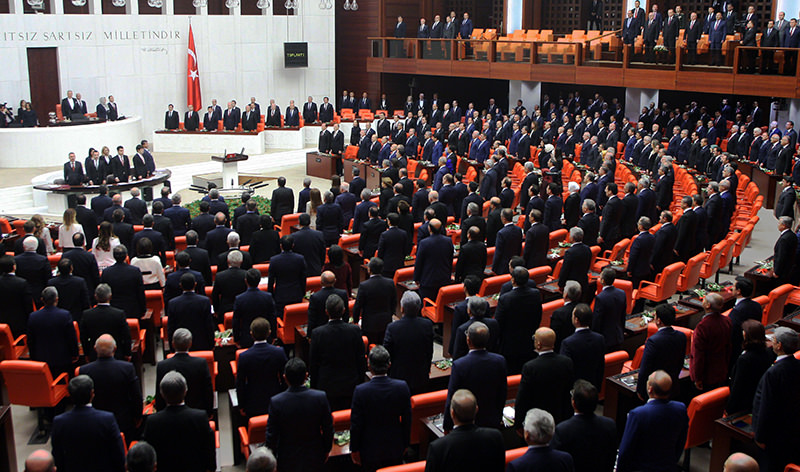 The ruling Justice and Development Party (AK Party), the Republican People's Party (CHP) and the Nationalist Movement Party (MHP) have issued a joint declaration against terrorism, standing together on Tuesday, in response to a PKK-led terrorist attack on Sunday evening in Ankara which killed at least 37 civilians and injured many others.

The pro-PKK Peoples' Democratic Party (HDP) once again failed to show solidarity in the face of terror and did not sign the declaration. Previously, the HDP refused to sign the joint declaration in February condemning the deadly Ankara terrorist attack, which killed 28 people and wounded 61. HDP deputies and chairpersons have repeatedly failed to condemn terrorist attacks carried out by the PKK and have been accused of adopting a pro-PKK policy following the elections.

The declaration follows calls on Monday by Deputy Prime Minister Numan Kurtulmuş to all political parties to take a common stance and issue a joint declaration against terrorism.

The declaration stated that the parties strongly condemned the terrorist attack, which had targeted the nation and the unity of the country.

"The terrorists' goal is to create pessimism among the people and to deal a blow to the sense of a common future," the declaration read, and added that Parliament is aware of their responsibilities.

The declaration also noted that the parties will display a determined stance against terrorism and will share the common pain of the nation, underscoring that these are more important than political ideology.

A bomb-laden vehicle exploded between two passenger buses near crowded bus stops located at the heart of Ankara on Sunday, a terrorist attack apparently carried out by the PKK. Many vehicles and buses were completely or seriously burned.

Sunday's bombing in Ankara was the third attack to target the Turkish capital in recent months.