Erdoğan: Those who threaten Turkey’s unity must be brought to justice 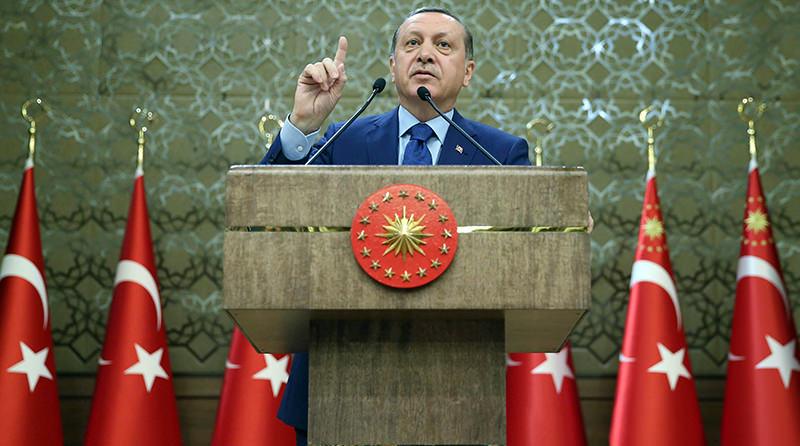 President Erdoğan said that anyone who breaks Turkey’s solidarity should be brought to justice and stressed the necessity of changing the definition of terror in the Penal Code, as well as lifting parliamentary immunity for charged HDP deputies

Those who endeavor to disrupt the unity and solidarity of Turkey should be brought to justice by Parliament removing their immunity; politicians should carry out their responsibilities before leaving adjudication to the judiciary, said President Recep Tayyip Erdoğan on Wednesday.

Speaking to local administrators at the Presidential Complex in Ankara, Erdoğan said that those who share the same language and approach as the leader of the PKK terrorist organization cannot be considered other than terrorists.

"Those who side with us in the counterterror fight are our friends, and those who are against us [in this fight] are our enemies. That has to be known. The issue is loud and clear."

He harshly criticized media outlets that defend PKK terrorists and exploit the situation by blaming the state to serve their self-interest.

"No title can be used as a cover to conceal partisanship with terror," the president said and added that those who use the same language and rhetoric as terrorists will be called terrorists, regardless of their profession, as they openly promote terrorism.

The president also reiterated his call to change the definition of "terror" and "terrorist" in the Turkish Penal Code and noted that all necessary equipment should be made available for those involved in counterterrorism. "I reiterate here that we should immediately redefine terror and terrorist. According to this new definition, we have to change our Penal Code immediately. We should provide all sorts of legal and technical feasibilities for our police officers, prosecutors and judges in their active fight against terror and terrorists."

Erdoğan also said that Parliament must immediately finalize lifting parliamentary immunity for deputies from the pro-PKK Peoples' Democratic Party (HDP), so that they can be held accountable for promoting PKK terrorism. Describing them as "illegitimate actors," he said: "I do not regard the members of the party that operates as the branch of the terrorist organization as legitimate anymore, with all due respect. Therefore, this call of mine is not for them but for our other parties."

Five deputies from the HDP stand accused of supporting the PKK terrorist organization through remarks and actions and may face legal action in the upcoming period, should Parliament vote to lift their immunity on March 22. Legal proceedings against HDP co-chairs Selahattin Demirtaş and Figen Yüksekdağ, İzmir deputy Ertuğrul Kürkçü, Ankara deputy Sırrı Süreyya Önder and Hakkari deputy Selma Irmak, were recently submitted to Parliament, and the motion to lift their immunity will reportedly be brought to the parliamentary agenda on March 22.

There are 347 legal proceedings against HDP deputies waiting to be sent to Parliament, according to a report prepared by the Justice Ministry.

Speaking at the Turkish Cooperation and Coordination Agency (TİKA), Erdoğan stated that Western countries listing the PKK as a terrorist organization have not done enough to fight against it and that fight should not remain in words alone. "Do you deport those you catch or extradite them to Turkey? How can they find those financial sources? We know, and we have submitted the necessary documents about the issue, but there has been no response," he said, adding a sincere approach must be developed for cooperation in fighting against terrorism.

Erdoğan slammed Western support for the PKK's Syrian branch, the Democratic Union Party (PYD), and the PYD's armed wing, the People's Protection Units (YPG), saying that Western-made weapons were seen in the hands of those terrorist organizations.

"Terrorist organizations like the PYD and the YPG are supported by only a small part of our Kurdish brothers in Syria. Similar is seen for the PKK in Turkey. Powers that actually support those organizations are different. The majority of our Kurdish brothers in Syria resist the atrocities of the regime and its supporting forces, along with Turkmens and Arabs," said Erdoğan.