Using every letter in the alphabet as cover for its terror attacks: The PKK's organization game 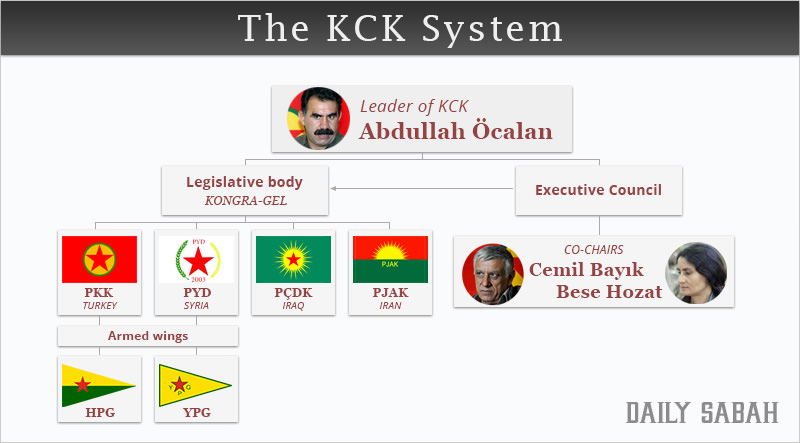 The bloody terrorist organization PKK - a perpetrator of inhumane attacks throughout its history-has chosen to blame its various sub-units in order to eliminate reactions against its armed and bomb attacks and problems that it has faced.

The PKK, which made its name known on August 15, 1984 by attacking the Eruh district [of southeastern Siirt province] and Şemdinli district [of southeastern Hakkari province] has pursued in vain to undermine peace and brotherhood in the country and destroy the constitutional order in the last 32 years thanks to its supporters – be it foreign intelligence agencies or other terrorist organizations.

The PKK has put forward different organizations as its attacks that killed civilians indiscriminately have foiled its efforts to project a different image.

In Syria, the PKK has used PYD as a name. By splitting PYD into two organizations-political and armed wings- the PKK has preferred the YPG for its armed wing.

In Iran, the PKK carried out its activities under the name of PJAK.

Landing into troubled waters as its attacks killed many civilians, PKK opted out of making "cosmetic" moves. It alleged various and independent groups and groups free from chain of command have built up their own process.

"The Democratic Youth Confederation" founded by the PKK has operated between 2005-2007 and made itself known in Turkey through "the Patriotic Free Youth Movement."

YDGM has continued its operations under this name.

Lastly, "the Civil Protection Units" (YPS) has tried to conduct its operations in the east and southeastern parts of the country.

Meanwhile, the armed action forces of the PKK have changed their name several times in this period. The terrorist organization has continued bloody actions by branches such as People's Defense Forces (HPG), Civil Protection Units (YPS), Self-Defense Units (OSB).

While it has transformed its umbrella name from time-to-time, like KCK, Kongra-Gel, KKK; it is known by couple of names such as PKK/KCK or PKK/Kongra-Gel.

On the other hand, due to inefficacy of the HPG, they established the TAK (Kurdistan Freedom Falcons) which has been carrying out terror attacks in big cities and touristic areas, against civilians and military since 2004. The PKK claims to be a "revolutionary, anti-racist" group while its hardliner wing TAK's ideology is simply based on Kurdish racism and anti-Turkish sentiment. The PKK prefers to let the so-called TAK's racist militants carry out inhumane terror attacks in western Turkey against civilians of Turkish ethnicity.

The PKK itself mainly operates in southeastern and eastern Turkey and usually targets security forces and civilians of Kurdish ethnicity, all while claiming to be a "supporter of Kurdish rights."

Some of the attacks in which civilians were hurt, were undertaken by the TAK:

- Five people were killed, two of whom were tourists and 20 people were injured when a bomb exploded in Kuşadası, a coastal resort town in western Turkey on July 10, 2005.

- The Justice and Development (AK) Party's representation office in Istanbul was attacked on April 5, 2006.

- Two people were killed in a hotel attack in southwestern Marmaris district on April 28, 2006.

- Four people were killed, many were injured in an attack in Antalya on 28 August 2006.

- Four soldiers, one civilian was killed when a military bus was blown up in Istanbul's Halkalı district on June 22, 2010.

- Two staff were killed in an attack on Istanbul's Sabiha Gökçen Airport on Dec. 23, 2015.

- A bomb attack against military service vehicles in Ankara killed 29 people on Feb. 17, 2016. (The TAK claimed responsibility two days later to acquit the PKK and YPG).

- 35 people were killed, including women and children, 125 people were injured when a bomb exploded at Ankara's Kızılay Square on March 13, 2016.

The terrorist organization, which has changed its discourse after the capture of Abdullah Öcalan in February 15, 1999, has been hiding behind 'democracy' and 'peace' concepts by using academic and political sympathizers and social media in the recent period.

Moreover, it is estimated that the terrorist organization saw the reconciliation process as a term of getting logistical support, gaining new members, and storing up weapons and ammunitions in city centers.

The PKK announced on July 11 that the cease-fire had ended.

After a Daesh supporter killed 32 activists in southeastern Suruç on July 20, the PKK blamed the Turkish state for "cooperating with Daesh terrorists" on baseless allegations and sabotaged the peace process, killing two policemen in Ceylanpınar district of southeastern Şanlıurfa province.

Despite the so-called discourse of the organization, it is observed that they have not given up its 'independent state' dream, and this situation has not changed under the leadership of Cemil Bayık and Murat Karayılan.

The PKK is trying to earn sympathy from the international arena by appearing like they are assisting international coalition forces that are fighting Daesh in Syria through its affiliates the PYD and YPG.

Turkey was hit by a new wave of violence when a suicide bomb attack by a Daesh terrorist killed 32 activists in Suruç on July 20.