Demirtaş accused of insincerity over call to return to reconciliation 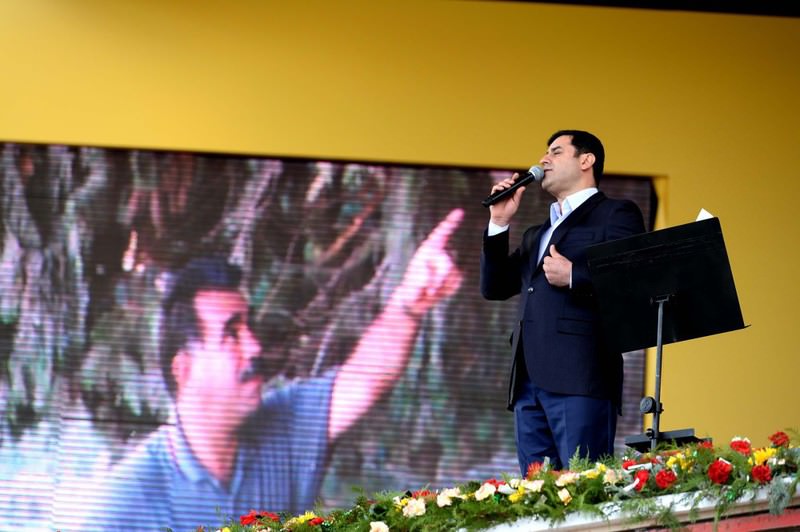 HDP Co-Chair Demirtau015f speaking at a Nevruz gathering in Diyarbaku0131r on Monday with a picture of jailed PKK leader u00d6calan in the background.
by Fatih Şemsettin Işık Mar 22, 2016 12:00 am

We are loyal to the way that the Dolmabahçe agreement paved and we do not want to come to the place where words have ended, pro-Kurdish Peoples' Democratic Party (HDP) Co-Chair Selahattin Demirtaş said.

The Dolmabahçe agreement from the reconciliation process had 10 points, which was shared with the public following the meeting between HDP deputies and Deputy Prime Minister Yalçın Akdoğan at Istanbul's Dolmabahçe Palace on Feb. 28 last year. The 10 points were declared as a road map for a final solution of Turkey's Kurdish problem and the PKK's 30-year armed insurgency. Demirtaş had accused the government the same day of insincerity saying: "The practice of the government does not give any confidence for peace." Turkey later suffered a series of terrorist attacks.

Speaking at Nevruz celebrations in Diyarbakır yesterday, addressing the PKK's imprisoned leader Abdullah Öcalan, he said: "We are loyal to the way that you have announced in the Dolmabahçe agreement. War, conflict is not ordinary."

He said: "One day words will fail. We do not want to come where words have ended. Ankara and the whole world must accurately consider this message sent from Diyarbakır."

Since the PKK broke the cease-fire with the Turkish state in July and resumed its armed campaign against security officers, together with targeting civilians, the HDP's controversial links with the PKK have become a matter of debate. Some statements from HDP officials and deputies have raised eyebrows.

Speaking to Daily Sabah regarding Demirtaş's statement, Professor Dr. Birol Akgün, director of the Institute of Strategic Thinking (SDE), interpreted Demirtaş's statement as a manifestation of the PKK feeling cornered and seeking a political maneuver.

"The PKK wants to open the sphere for politics. It wants to give a message by saying that they are in favor of negotiations, returning to politics. It is an indicator of being cornered."

In the clashes with security forces so far the PKK's losses are estimated at around 4,000 militants. Despite this considerable loss, the terrorist organization seems intent on escalating violence across the country, according to the latest statements from its leaders.

In the event of the PKK sitting at the negotiation table, Akgün said: "If that will really happen, the government should guarantee it with the PKK leaving arms behind and sending its militants abroad unconditionally. For now, they are not at this point either."

Speaking to British daily The Times four days before the deadly car bomb that killed 35 people in Ankara, Cemil Bayık, a leader of the PKK, described their current activities in Turkey through targeting civilians with suicide bombings, as a "life and death" fight.

Kurtuluş Tayiz, a Kurdish columnist for the daily Akşam, has said: "It is in fact the PKK and the HDP that discredited the Dolmabahçe agreement. Today, they are in a very difficult situation."

He pointed to Demirtaş and PKK leaders' statement after the agreement last year and said yesterday's statement lacked sincerity. "The murderous face of the PKK is revealed. The thing they want at this point is to get a second bite at the cherry," he said.

The conflict between the Turkish state and the outlawed PKK has been ongoing since 1984 and has resulted in some 40,000 casualties as well as major economic losses for Turkey and its people. The PKK initially aimed to establish an independent Kurdistan in southeastern Turkey but changed its rhetoric to democratic autonomy over time. It has been headquartered in Northern Iraq's Qandil Mountains since the height of Turkey's military response in 1997.