President Erdoğan lambasts EU’s hypocrisy when it comes to PKK 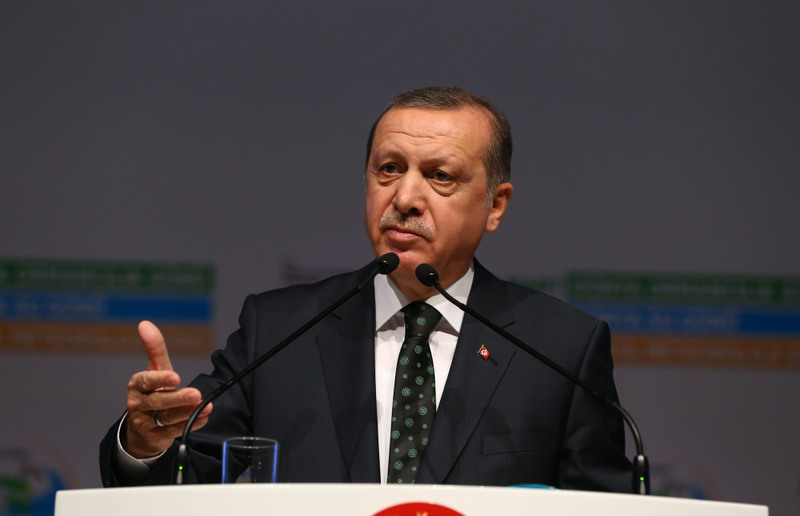 President Erdoğan questioned the ‘sincerity' of the EU's support for Turkey's fight against PKK terroristm. His criticism came after multiple PKK supporters were allowed to erect a tent outside the European Council building in Brussels amid EU countries' silence over Ankara's extradition requests for PKK members living in Europe

President Recep Tayyip Erdoğan, in a speech in Istanbul on Monday, questioned the sincerity of the EU's support for Turkey's fight against PKK terrorists and accused Europe of hypocrisy over criticism of Turkey's counterterrorism operations targeting the PKK, which has been blacklisted by both Turkey and its Western allies as a terrorist group. "How can you talk about sincerity when the terrorist organization is allowed to erect a tent in Brussels outside the European Council building?" he said, referring to the tent set up by PKK supporters next to where last Friday's EU-Turkey summit was held.

He added that Turkey will continue to develop new strategies to fight terrorists and achieve concrete results in a short period of time, as long as the nation protects its unity and solidarity. "This is the biggest antidote to terrorism" he said, noting that Turkey is going through one of the bloodiest waves of terrorist attacks but will not be intimidated.

President Erdoğan also criticized the West for "failing the test" on refugees and not distancing itself from terrorist organizations such as the PKK. Erdoğan criticized Europe for its ambiguous stance towards the terror incidents in Turkey. The president has consistently stressed that Turkey expects more sympathy from European countries regarding the fight against PKK terrorists. In recent months, Turkey has been subjected to a surge of terror that has hit both the capital Ankara and the country's largest city Istanbul, targeting civilians as well as security personnel.

Regarding the best way to deal with the menace of terrorism, the Turkish president said "As long as our nation keeps our unity, togetherness and solidarity strong, [we can prevail over terrorism]…This is the greatest antidote to terrorism." He also called for the development of new ways to fight terrorism. "I believe we will reach a result as soon as possible by developing new fighting methods against new terror techniques," he said.

On Sunday, Erdoğan asked why Europe is not bothered by terrorist attacks in Turkey as opposed to those in Paris. "You see what is happening with the EU. The Prime Minister [Ahmet Davutoğlu] went to negotiations with the EU. The PKK set up a tent behind the building where the negotiations took place," Erdoğan said. PKK supporters were forced to take down their PKK banners and flags in Brussels after a warning from Davutoğlu to EU leaders. The supporters, however, were later allowed to hang their banners again, after Davutoğlu left the city. The tent was partially brought down by anti-PKK groups in Belgium on Sunday; however, groups supporting the PKK erected the tent again on Monday.

On Friday, Davutoğlu expressed his "deep disappointment" over the stance by some EU countries towards the PKK. "While we're mourning the death of 35 civilians killed in a terrorist attack, people from the same terrorist organization were allowed to set up tents and wave their flags right outside this building," he said. Davutoğlu pleaded with the world to not stay indifferent to terrorist organizations.

The PKK, which is listed as a terrorist organization by the U.S. and the EU, broke an almost two-year-long ceasefire with the Turkish state, in July 2015, and resumed its armed campaign in which civilians have been targeted. In the clashes, the PKK's losses are estimated at around 4,000 militants. Despite this considerable loss, the terrorist organization seems intent on escalating violence across the country, according to the latest statements by its leaders.

The Turkish president also issued a statement to celebrate Nevruz, which marks the coming of spring across several cultures around the world. "Together with the revival of nature, I wish Nevruz marks a day which strengthens love and affection in our hearts along with the will towards coexistence," Erdoğan said. "During these days, we need to own our unity and solidarity more than ever." Nevruz marks the beginning of spring and has been celebrated in the Balkans, the Black Sea, the Caucasus, and most parts of Asia for hundreds of years.