Probe launched into HDP gathering in shadow of images of weapons 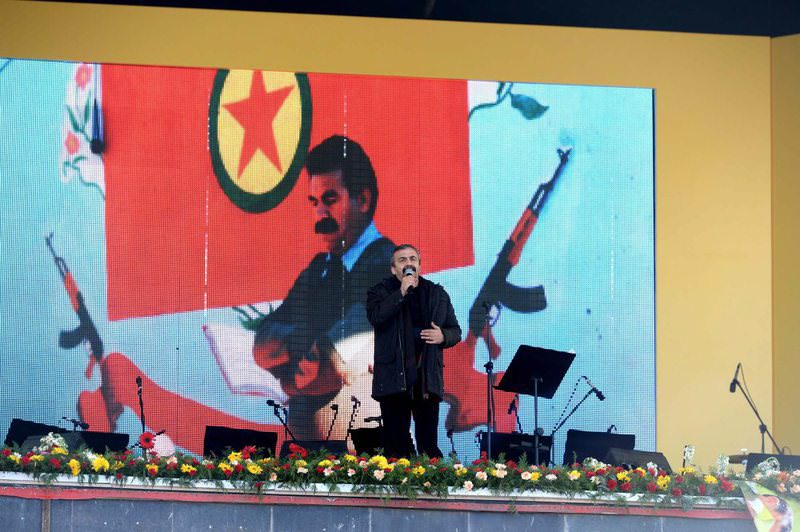 HDP Ankara Deputy u00d6nder addressing a crowd at an HDP gathering in Diyarbaku0131r province on Monday in front of images of weapons, imprisoned PKK leader u00d6calan and a PKK flag.
by Daily Sabah Mar 23, 2016 12:00 am

The Diyabakır Prosecutor's office has launched an investigation into the Nevruz celebrations held in the Bağlar district on Monday where Peoples' Democratic Party (HDP) Co-Chair Selahattin Demirtaş and Ankara Deputy Sırrı Süreyya Önder delivered speeches in front of images of weapons.

The probe was reportedly launched on the grounds that terror propaganda was included in the celebrations. Demirtaş and Önder were addressed the crowd in front of images of Kalashnikovs, a weapon that the PKK widely uses.

Having hinted at the possibility of waging a war against the Turkish state early in January, Önder addressed the government and called for a return to the reconciliation process. "Open the way to İmralı [and] let's change the environment of the country in a week by continuing where the negotiations left off," he said.

Önder had said there could be war over concerns with the security and health of imprisoned PKK leader Abdullah Öcalan at a press conference in Parliament early in January. "Imposing isolation on Öcalan and making his people, as well as his organization, worry about his security and health are an invitation to war," Önder said.

Demirtaş also called on the government to return to the reconciliation process. "We are loyal to the way that [the government] announced in the Dolmabahçe agreement. War and conflict are not ordinary," he said.

Even though the HDP urges a return to the reconciliation process, President Recep Tayyip Erdoğan and Prime Minister Ahmet Davutoğlu have repeatedly asserted that the government is done with PKK peace talks and will definitely not return to the table. "We will continue our struggle until concrete is poured on the weapons and there are no terrorists within our borders," Erdoğan said.

ACCUSATIONS OF HDP AFFILIATION WITH PKK

The pro-Kurdish HDP has long been accused of having close ties with the PKK. The party has been labeled by some as a political extension of the PKK. Monday's celebrations put the party under fire, as Demirtaş and Önder addressed a crowd among which were PKK flags being waved.

Since the PKK broke the cease-fire with the Turkish state in July and resumed its armed campaign against security officers, along with targeting civilians, the HDP's controversial links with the PKK have become a matter of debate.

After the PKK unilaterally returned to armed struggle in July 2015 and turned urban areas in southeastern Turkey into battlefields, the HDP was expected to condemn the PKK's strategy and fulfill its commitments. However, the party has been accused of not sufficiently condemning the PKK and showing open support for its strategies.

Demirtaş has called for demonstrations in the southeastern parts of Turkey many times. In an attempt to provoke Kurds in the region to demonstrate against the Turkish state in the face of terror operations against the PKK, Demirtaş urged people to take to the streets in support, but the call found little support.

The other co-chair, Yüksekdağ, also drew heavy criticism for her alleged pro-PKK stance with her remarks. "We lean our backs on the YPJ [Women's Protection Units], YPG [People's Protection Units] and the PYD [Democratic Union Party], and we do not see any harm in mentioning and defending it," she said in July. The PYD and its armed wing YPG are affiliated with the PKK. In addition, the two are reportedly commanded by PKK leaders. Turkish capital Ankara was recently hit by a suicide bombing attack carried out by Abdülbaki Sömer, who fought in YPG ranks in Syria.

Yüksekdağ also praised the PKK and described it as "a national liberation movement and also an organization that stands for democracy and equality." A parliamentarian labeling an organization that targets security forces and civilians democratic and an advocate for equality drew ire in the public.

HDP İzmir deputy Kürkçü is another party member that abstained from reprimanding the PKK violence. PKK terror attacks on Turkish security forces are not "a matter for condemnation," Kürkçü said in a live broadcast on BBC World in August.