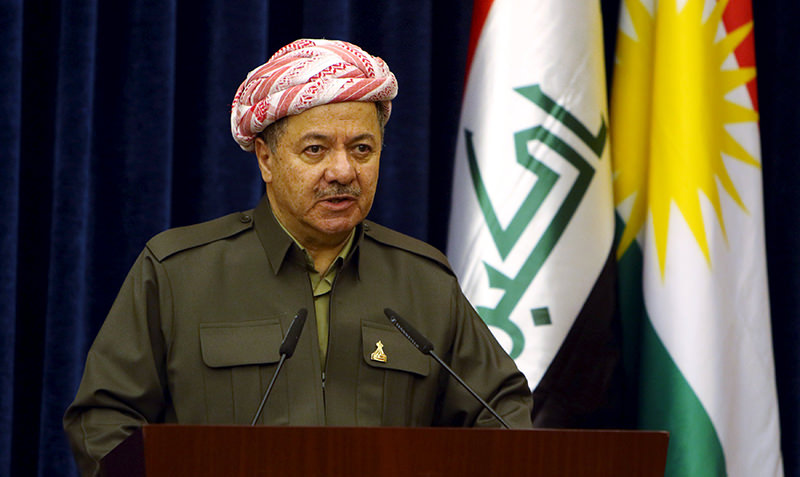 While the U.S. and Russia turn a blind eye to the strong affiliation between the PYD and PKK terrorist organization, KRG President Barzani asserted that the two organizations are no different and any support given to the PYD would mean support for the PKK

When asked about his thoughts on deepening military ties between the United States and the PKK Syrian affiliate Democratic Union Party (PYD), Kurdistan Regional Government (KRG) President Massoud Barzani said: "Any support to the PYD means support for the PKK. They are exactly one and the same thing." The U.S., Turkey's NATO ally, drew harsh criticism from Ankara for its close relations with the PYD, which enjoyed U.S. weapons support while fighting DAESH and Syrian opposition supported by the West. In an interview with Al-Monitor on Wednesday, when Barzani was asked if the Americans believe that the PKK and PYD are the same, he said: "They know very well, but they don't want to say they know very well."

Barzani said that President Recep Tayyip "Erdoğan has a better understanding of the Kurdish cause than most." He said that Turkey's politics to deny Kurds was over during Erdoğan's time as prime minister. "When Erdogan was prime minister, it was he who came to Erbil, and to Erbil said that the era of denying the Kurds was over. This was a very important development," Barzani said, "What I heard from Erdoğan, I heard from no one else."

Commenting on the fate of the Kurdish reconciliation process that was unilaterally ended by the PKK last July, Barzani said that he would have liked for the peace process to not have stopped and stressed that they have tried their best to keep the peace process going.

Expressing his concern about the PKK's terror activities in cities Barzani said that he has a fear that PKK's attack may lead to ethnic conflict between Kurds and Turks. "Now, I am very concerned and afraid. When we witness bombings in the cities, terror acts in the cities, in the name of obscure terrorist organizations, in the end they [the Turkish people] will hold all the Kurds responsible. And I fear that this will lead to ethnic conflict between the Kurds and Turks," he said.

Touching on KRG relations with Turkey, Barzani said: "In the beginning, Turkey was against the federalism of Kurdistan, and look at our relations today. As long as the referendum is only for Iraqi Kurdistan, it has nothing to do with the Kurds in Turkey [there should be no problem]. So we do hope that Turkey understands and comprehends what Kurdistan is asking for. But at the same time we are talking to Baghdad, we will talk to Iran at the same time that we talk to Turkey. We want to do it in a peaceful and balanced way.''

As to whether Ankara will accept Iraqi Kurdistan's independence if they declare it, Barzani contended: "If the current [AK Party] government does not recognize and accept an independent Kurdistan, I don't think any other government in Turkey would," he said.

Barzani also said that the KRG does not feel any pressure from Ankara to take action against the PKK and underlined that they have their own agenda regarding the PKK. "Definitely, the PKK should leave Sinjar, and we want them to leave Sinjar peacefully – not by force," he said.

Barzani stated during an interview with Sky News Arabic that the fate of the Kurdish people in Syria are unknown, as he said they are being used as a war tool. Barzani said, "I do not know what might happen to Kurds once the war ends, because neither the Syrian administration nor the opposition grants their rights." Stressing that there are many political disputes and disagreements among Kurds in Syria, Barzani said that they [Kurdish people] have missed many opportunities due to this.