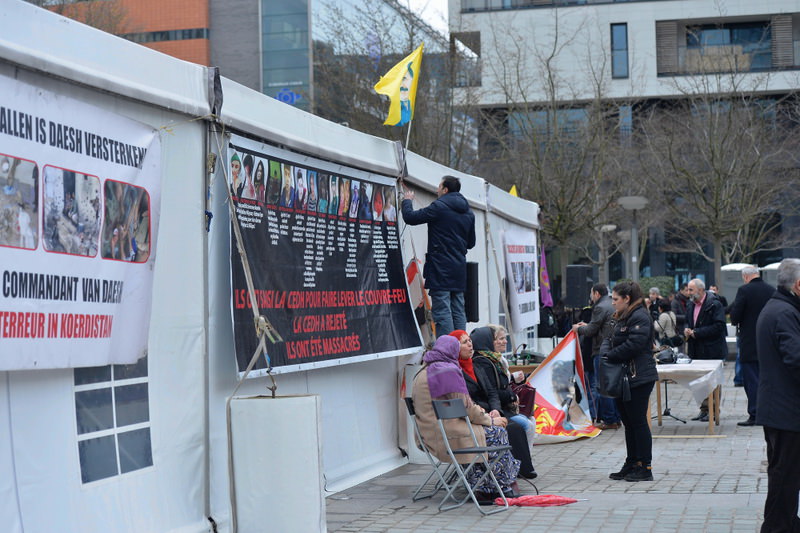 PKK supporters erected a tent in Brussels, which was criticized harshly by Turkey on the ground that Belgium turns a blind eye to the terrorist organization.
by Daily Sabah with AA Mar 25, 2016 12:00 am

Contrary to Turkey's determined stance in its fight against the PKK and DAESH, Belgium has always been a safe haven for many members of various terrorist organizations and has turned a deaf ear to Ankara's constant demands for the extradition of terrorists

Despite President Recep Tayyip Erdoğan's statement that Ibrahim El Bakraoui, one of the suicide bombers in the Brussels attacks, was previously deported from Turkey's southeastern province of Gaziantep in July of last year, Belgium has always rejected Turkey's demands to extradite many PKK and other terrorist group members and continues to be a safe haven for them.

Fehriye Erdal, a member of the Revolutionary People's Liberation Party Front (DHKP-C) who was involved in the killing of a prominent Turkish businessman in 1996, had fled to Belgium after the murder and was not extradited to Turkey despite all demands. The country also does not recognize her as a terrorist and describes as a "gang member."

Zübeyir Aydar, a senior PKK member who the U.S. Treasury Department has designated as an international drug trafficker, was arrested in Belgium in 2010 but released three weeks later.

According to information that Anadolu Agency (AA) obtained from the Justice Ministry, Turkey has conveyed demands for the extradition of 56 people who have been charged with petty crimes to Belgium. Thirty-five of them were accepted and eight were rejected.

However, considering the figures for terror criminals, Belgium has refused such demands. Ankara demanded 30 terrorists be extradited from Belgium, but country rejected 20 of them while the processes for nine are still pending and one, Fidan Doğan, was murdered in Paris.

Among those for whom Ankara has demanded extradition, most are PKK members, one each from the DHKP-C and Communist Party of Turkey/Marxist-Leninist (TKP/ML) and the rest are from other terrorist organizations.

According to the information AA previously received from a security source, Turkey has applied for Interpol Red Notices, which indicate those individuals are wanted for prosecution or to serve a sentence based on an arrest warrant or court decision, to request the extradition of 657 PKK activists. Germany has also rejected more than 300 requests from Ankara for the return of terrorists. Even though Turkey has requested the return of the terrorists, the answer has so far been negative.

Following the recent Ankara bombings conducted by the Kurdistan Freedom Hawks (TAK), the PKK splinter group, as well as the DAESH suicide bombing on Saturday near Istanbul's Taksim Square, authorities have reportedly updated the files on PKK terrorists in accordance with them targeting civilians. Officials will demand the extradition of those PKK leaders in Europe in accordance with a recent decision from a federal court in Switzerland on a request from Germany. The Swiss federal court's decision underlined the difference of methods between a freedom fighter and a terrorist. It will be used as an example by Turkish authorities for PKK and DHKP-C members' extradition from Europe.

The files complied by Ankara against these PKK officials and members include the organization's propaganda in the country they live, racketeering under cover of donations and drug trafficking that goes throughout Europe as well as financing the terrorist organization through the money collected from activities conducted in Europe.
RELATED TOPICS