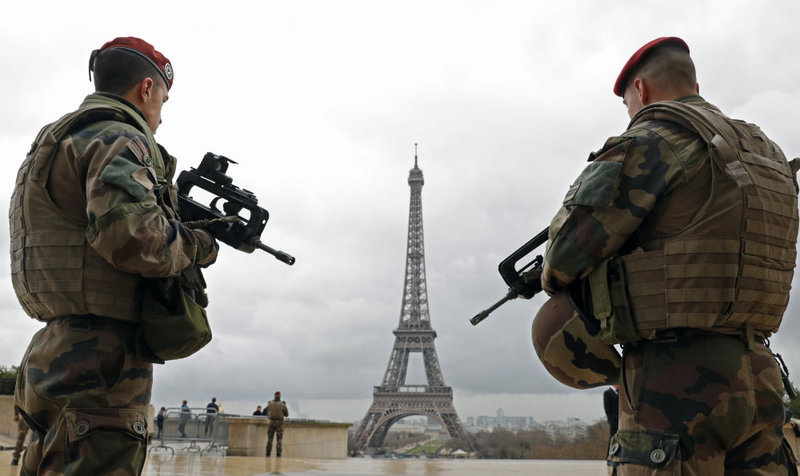 French paratroopers patrol near the Eiffel tower in Paris on March 30. France and Belgium have intensified their security measures in urban centers following terror attacks.
by Daily Sabah Apr 01, 2016 12:00 am

Some European countries showed negligence when Turkey provided them with concrete intelligence on terrorists and allowed DAESH terror to spread, President Erdoğan said in an exclusive interview in the U.S.

Some European countries did not pay enough attention to Turkish intelligence on DAESH suspects and allowed DAESH terror to spread, President Recep Tayyip Erdoğan said in an exclusive interview with CNN International during his U.S. visit.

"We have been calling on nations to take a common stance against terrorism, and many of the European member states seem to have failed to attach the significance that this call for action deserves," Erdoğan said.

The president went on to slam some European countries that have not fulfilled their obligations in the fight against foreign fighters. He pointed to many foreign fighters coming to Turkey from Europe to fight in the DAESH ranks. "We were left alone by Western countries. Our intelligence-sharing expectations were never met," Erdoğan contended.

Erdoğan also said Belgium showed a "similar negligence," in that Belgian authorities had released one of the Brussels attackers, Ibrahim El Bakraoui.

Commenting on the fight against DAESH, Erdoğan said: "We are committed to this goal, and we expect the same determination from Western countries as well."

Even though CNN International published only a small part of the interview with President Erdoğan by the time Daily Sabah went to press, the full interview will be available on the channel's website on Friday.

On March 23, President Erdoğan said that Turkey had previously deported one of the Brussels terror attackers and had notified Belgian authorities. The Presidency identified the Brussels attacker who was deported by Turkey in June as Ibrahim El Bakraoui.

Speaking at a press conference, Erdoğan said that Turkey had caught one of the Brussels attackers in the southeastern province of Gaziantep in July 2015 and deported him, but released him as Belgium did not establish that the suspect had terror links.

"The Belgian embassy was notified on July 14, 2015, about the deportation of the attacker, who was later released by Belgium," Erdoğan said, adding that Belgium could not establish that the suspect had terror links, despite Turkey's warnings.

Erdoğan added that the Netherlands was also involved in the matter, as the suspect was deported to the Netherlands at his own request, and the Dutch authorities were also informed about the incident.

Belgium was shaken after Erdoğan's press conference. Belgium's interior and justice ministers offered their resignations but these were rejected by Prime Minister Charles Michel, reported Belgian media. Interior Minister Jan Jambon said on a TV program that Michel had asked him to stay on, stating: "In times of war, you cannot leave the field."