Australian Ambassador: What happened in Ankara could happen anywhere, we must not succumb to fear 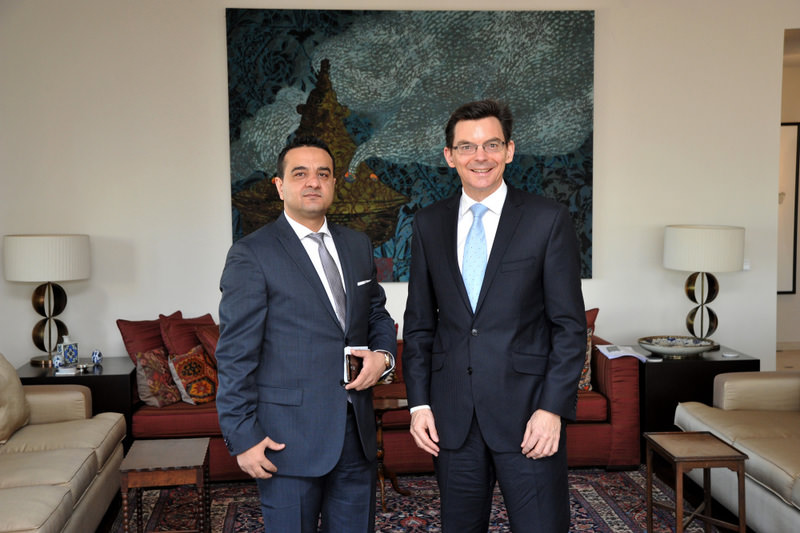 Australia's ambassador to Turkey, James Larsen, who was only meters away from the scene of last month's suicide bombing attack by the PKK, told Daily Sabah that the responsibility of governments as well as individuals is to not succumb to the sense of fear that terrorists intend to instill. He also lauded the anti-DAESH cooperation between Turkey and Australia

Australia's Ambassador to Turkey James Larsen, together with his daughter, was meters away when a member of the PKK terrorist organisation carried out a suicide bomb attack in Ankara on March 13 which killed at least 37 people. After the attack Mr. Larsen continued carrying out his duties, and shared his deep sympathy and support for the government and people of Turkey. According to Ambassador Larsen what happened in Ankara could happen anywhere, while underlining that the responsibility of governments as well as individuals is to not succumb to the sense of fear which terrorists intend. Speaking to Daily Sabah, Ambassador Larsen praised Australia's cooperation with Turkey in the fight against DAESH and stressed that from an Australian perspective, it is completely unacceptable for any Australian national to be fighting in Syria, on any side.

Commenting on Australia's priorities as chair of the international MIKTA (Mexico, Indonesia, Republic of Korea, Turkey and Australia) partnership, Mr. Larsen emphasized that Australia is looking to collaborate and cooperate across a range of multinational issues, while adding that they will continue to work on MIKTA's seven core themes.

Regarding Australian-Turkish bilateral relations, Ambassador Larsen pointed out that education is an area where Australia and Turkey can really add value for each other. Australia is expected to be an energy superpower in coming years, while Turkey will remain an energy-hungry country for the foreseeable future. Commenting on the cooperation in the energy industry, Mr. Larsen stressed that Australia is at the cutting edge of coal technology, and therefore they will be very happy to work with Turkey on this. Touching upon the importance of ANZAC day, Larsen said that ANZAC Day and Australia's ANZAC story is central to how Australians define their character, their sense of history and their place of the world.

Your Excellency had a narrow escape from a car bombing in Ankara that killed at least 35 people two weeks ago. Is there any change in your life after this horrific incident?

It was a terrible attack. I was driving with my daughter through Kızılay and we had stopped at the Kizilay Square lights when we saw the explosion on the other side of the intersection. Fortunately we were far enough away not to be directly impacted, but we saw the initial explosion and, of course, the terrible damage done to the buses and cars nearby. As you know, terror attacks can occur anywhere, including Brussels, Paris, London and Sydney. What happened in Ankara could be the case in any city. We were just incredibly grateful that we were unaffected and, of course, our thoughts are with the many who died or were injured.

Following the attack, I witnessed the Turkish authorities (police, ambulances and emergency services) responding very quickly and efficiently to the incident.

In this regard, how would you evaluate Prime Minister Ahmet Davutoğlu's recent call for Turkish people to go out in a bid to keep public morale high and break the terrorists' objective of spreading fear in society?

I can completely agree with the Prime Minister. You have an environment where the whole purpose of these acts of terror is to make people afraid, to be fearful and to be kept from going about their daily lives. I think it's a responsibility of governments as well as the responsibility of all individuals to make sure that we don't succumb to this sense of fear. Otherwise the terrorists will win. Of course, at the same time it is sensible to take account of the overall security environment and to make sure we have a proper level of safety.

Australian officials have announced that the government has cancelled Australian passports to prevent Australian citizens from traveling to Syria to become fighters in that conflict. Could you give us more information about Australia's fight against DAESH and cooperation with Turkey in this field?

We continue to have a very strong focus on the whole issue of fighters in Syria. From an Australian perspective, it is completely unacceptable for any Australian national to be fighting in Syria on any side. For any Australian who is involved in the fighting, the Australian authorities will take action against you.

When you look at the numbers at the present time, we think there are around 110 Australians actively involved in fighting in Syria. It seems small number, but for us it is a lot given we are such a long way away and the effort it takes to get to Syria. And if you compare the number of Australians engaged in fighting in Syria with, say, the Afghanistan experience, it is many more. So far, we think around 50 Australians have been killed in Syria. We have cancelled or refused some 165 passports for Australian nationals. And some 31 Australians have been charged in Australia for involvement in the Syrian conflict since 2014. A further 190 individuals have been investigated. Taking these figures into account, we would say the government response has been very strong.

I can say that cooperation with Turkey on the foreign fighter issue has been extremely good. We have a very comfortable relationship with the Turkish police and security authorities. For instance, we recently upgraded our Australian police presence at the embassy in Ankara to two full-time officers.

There are also several Australians fighting in Syria with the People's Protection Units (YPG), an offshoot of the PKK terrorist organization. These incidents recently sparked debate in Australia and an increasing number of people defend the idea of prosecution of these YPG fighters when they come back home. What are your thoughts on this issue?

The first point in that each case depends on its own merits and the judgement of the courts. From the government's side there is a very strong commitment to make sure any participation in fighting in Syria for any side is treated as illegal. The government is determined to make sure all claims are investigated and if appropriate, prosecuted. Of course, any conviction depends on the evidence, the nature of any defence and the judgement of the court.

So from the Australian perspective, it doesn't matter whether somebody is fighting for DAESH or fighting against DAESH?

In Syria, all fighting for foreign forces is illegal from an Australian perspective.

MIKTA, the informal consultative forum which brings together Mexico, Indonesia, South Korea, Turkey and Australia, is becoming an important subject in Turkish-Australian bilateral relations. Why does Australia attach importance to MIKTA?

From our perspective, MIKTA brings together five significant countries, each of which brings something special from its particular geographic location, history and place in the international community. We are all members of the G20, we all have interests in similar issues like energy and counter-terrorism, and we have similar views on many global issues. It makes sense to work together. Because of MIKTA, we are pursuing more regular ministerial exchanges, visits at senior parliamentary level – for example the Speaker's level. We are collaborating by having diplomats work and study together. For example, two Australian diplomats a couple of months ago spent time in Ankara at the Turkish diplomatic academy. This was the first time this had occurred and was an important initiative.

Australia is currently chairing MIKTA. What are Australia's priorities as MIKTA chair?

Australia's priority themes as chair are international energy governance and energy access, counter-terrorism and global security, sustainable development, gender equality, trade and the economy, and good governance, democracy and human rights. These themes, along with peacekeeping, were adopted as the seven core themes for future MIKTA collaboration in January 2016.

Australia is expected to be an energy superpower in the coming years. Turkey, however, will remain an energy importer in the foreseeable future. What cooperation in energy is possible?

I recently met with the Turkish Energy Minister Berat Albayrak, and we discussed areas of potential energy cooperation. The Minister was particularly interested with liquefied natural gas (LNG) possibilities between Turkey and Australia. Of course, LNG is a very long-term prospect because of the nature of supply contracts. But I committed to ensure there was a high level of awareness in Australia of the Minister's interest.

I believe coal will continue to be an important part of Turkey's energy mix, and Australia is more than willing to play its part as a reliable supplier. Australia is also at the cutting edge of coal technology and we are happy to work with Turkey on this.

Renewables are also increasingly important for both Turkey and Australia and we are very keen to share expertise.

Do you think the current state of the Turkish-Australian relationship is fulfilling for both countries? What are the main areas that we need to improve on?

On bilateral commercial relations, we can do so much more. I think education is an area where Australia and Turkey can really add value for each other. For example, vocational training is very strong in Australia – the development of practical skills and training. I think we can draw on our expertise in this area to collaborate with Turkish institutions. I am very keen to encourage more Turkish students to spend time in Australia, and more Australians to come to Turkey to study at university.

Agriculture is an area where we can cooperate much more. This can be on the investment side, trade in agricultural products or exchange of technical expertise. As discussed above, energy is an important area for potential cooperation. Mining and mining services also offer opportunities. I also believe Australian expertise in infrastructure is an area which offers potential for further development.

Lastly we can talk about the importance of ANZAC day and this year's commemoration.

ANZAC Day and Australia's ANZAC story is central to how Australians define their character, our sense of history and our place in the world. The commemorations at Gallipoli every year on April 25 are tremendously important. This was emphasized last year, when over 10,000 Australian and New Zealanders attended the official ANZAC Day ceremonies near the site of the original landing. Tens of thousands more were on or near the Gallipoli peninsula to remember the momentous events of 100 years ago. The centenary experience was enormously positive for Australia-Turkey relations. There is a deep sense of gratitude on the part of all Australians for the hospitality and generous welcome extended every year by Turkey to Australian visitors. This provides a very strong foundation for the relations between our two countries.