Erdoğan, PM: No return to table with PKK, no turning back in counterterror fight 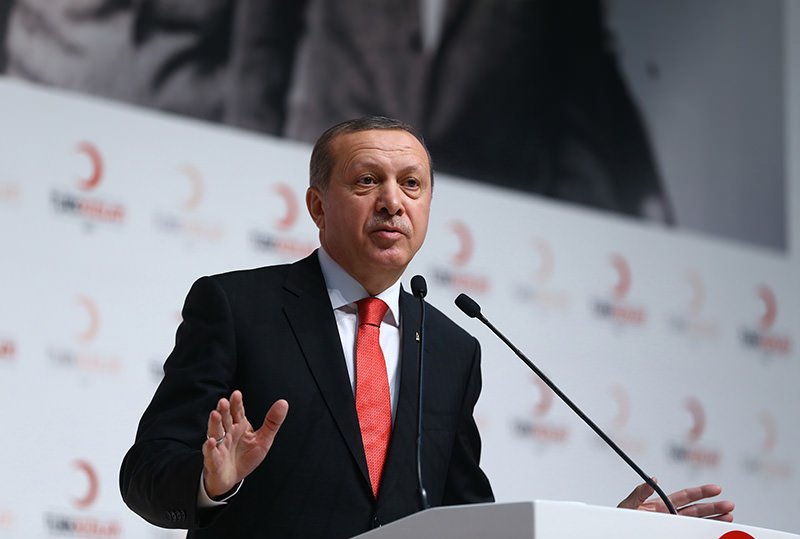 Despite calls from the PKK terrorist organization and affiliated political figures for a return to the reconciliation table, there will be neither negotiations nor anything to talk about for the Turkish state, both President Recep Tayyip Erdoğan and Prime Minister Ahmet Davutoğlu asserted on Monday.

Erdoğan slammed the PKK and requests from different circles to soften or halt counterterror operations. "There is not even a slight toleration or stepping back on this issue. … There is no issue that one can negotiate or talk about because we had tried other ways in the past," Erdoğan said, adding that the state had previously exerted every effort, citing the reconciliation process.

At the Justice and Development Party (AK Party) parliamentary group meeting on Tuesday Prime Minister Ahmet Davutoğlu said: "There is no way back from the fight against terror and there will never be."

He asserted that the state is doing the right thing with counterterror operations at the moment just as it had done in the past with the reconciliation process. "No one should expect us to address the armed terrorist organization [PKK]. … [It] can only be addressed by our security forces," he added.

"Terrorists have two ways before them: They will either surrender or be neutralized one by one in the holes they are trapped in. There is no third way in front of Turkey anymore," Erdoğan said.

Erdoğan has repeatedly said that the Turkish state was left with no choice but to launch counterterror operations and sweep out PKK terrorists. The PKK unilaterally broke a two-and-a-half-year cease-fire with the state in July 2015. Since then the Turkish Armed Forces (TSK) have been hitting PKK targets in Northern Iraq and launching ground operations in the southeast, where the PKK was dominant.

"No word from them is reliable. That has already passed. We will finish the job," Erdoğan said. "We tried to accomplish alternatives with all sincerity and goodwill, it did not come true," he added.

Having stressed that the Turkish state will not halt its counterterror operations and will continue to crack down on the PKK, Erdoğan then picked on Europe. "Those who want to seem like friends to us in Europe present the pictures of terrorists in their erected tents where there is an international meeting," he said. He also questioned how such a friendship can exist.

Pointing to the end of the cease-fire between the state and the PKK, Davutoğlu said the PKK started a new period by erecting barricades and killing security forces. "[And] we did what's required for a state and started the biggest operations against the separatist terrorist organization," he said.

Recalling his visit to the Sur district of Diyarbakır province last week, Davutoğlu thanked the locals for acting bravely and not succumbing to the PKK's threats.

'NEITHER PKK NOR HDP TO BE TAKEN SERIOUSLY ANYMORE'

Hikmet Genç, a columnist for the Yeni Şafak daily, spoke to Daily Sabah on the subject and slammed the PKK for spoiling the reconciliation process and betraying the Turkish state. "At this point, as the president said, they will either surrender or be killed wherever they are found," Genç said, adding that Turkey "righteously" cracks down on the PKK after going through a "tough period."

"Everything turned upside down after the [June 7] elections. The PKK had not fulfilled what fell on its shoulders and neither had its political wing [referring to the Peoples' Democratic Party (HDP)]. They started to spread terror, betraying [the state]," he said.

The PKK used the reconciliation process for its own interests, Genç said, adding that the region and locals have been the most affected by PKK terror. "Neither the PKK nor the HDP will be taken seriously anymore by the Turkish state. Kurds and Turks will be addressed," he added.

There is practically no way to return to May 2013 because the PKK has blocked any path to politics and then there is the issue of northern Syria, Hilal Kaplan, a columnist for the Sabah daily and Daily Sabah, told Daily Sabah. "The PKK used the reconciliation process to stockpile arms and weapons and demonized the AK Party. It is impossible to create space for politics," Kaplan said, adding that a way to peace through dialogue with the PKK does not exist.

"The PKK thought it could also gain territory in Turkey as it did in northern Syria. This struggle of gaining territory disabled the space for politics," she contended.

Kaplan also touched on the many reforms by the government to better the lives of Kurds in the country. "The PKK was expected to disarm while the government gave Kurds more rights and freedoms. The PKK, however, never agreed to it," she said.