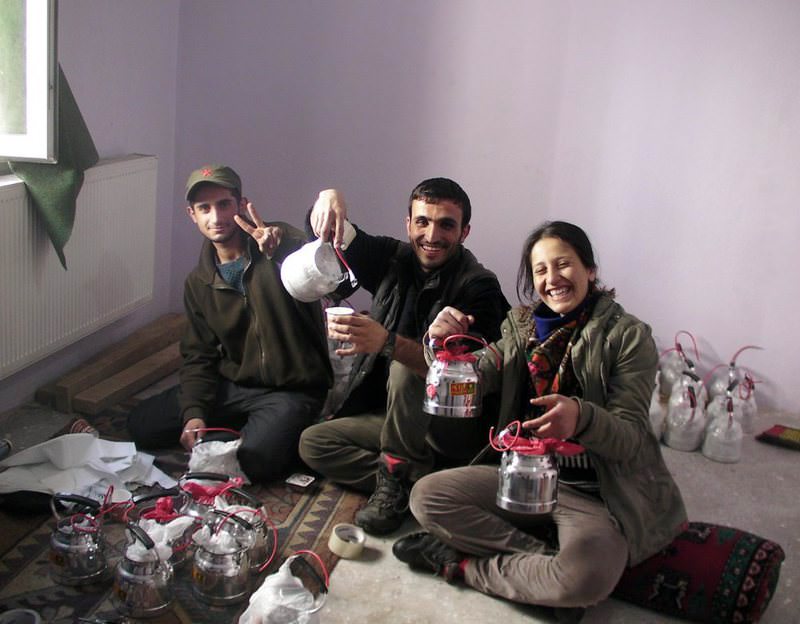 While military operations against the PKK continue with a determination in curfew-imposed southeastern districts, security officials said a senior PKK leader was among 16 killed in the Yüksekova district of Hakkari province

Security sources say ongoing operations against PKK headquarters in the Yüksekova district in the southeastern province of Hakkari have killed 16 terrorists, including two senior leaders of the terrorist organization in the district.

Sources indicate that security forces killed Emel Güçlü, 26, one of the senior leaders of the PKK in Yüksekova with the nom-de-guerre "Zilan," and operations on Saturday saw the killing of Necmettin Duman, who carried out logistical works for the terrorists.

Güçlü was responsible for planning many attacks, including against military convoys, on security forces in the conflict-ridden province of Hakkari, and had a bounty of TL 300,000 ($106,000), considered under the "gray" category of terrorists most wanted by the Interior Ministry. Terrorists are categorized into different colors – red, blue, green, orange and gray consecutively – depending on their threat level for the country, on the website of the Interior Ministry.

In the Eski Kışla neighborhood of Hakkari, a PKK stronghold and ammo dump was destroyed by security forces in another operation. During searches, RPG-7 ammunition and 20 kilograms of handmade explosives were confiscated. Dozens of equipment belonging to DShK machine guns, as well as two Kalashnikovs and 3,000 bullets were seized.

Reports link the PKK stockpiling of weapons in Turkey's southeast with smugglers from the People's Protection Units (YPG), the armed wing of the Syrian-affiliate Democratic Union Party (PYD), who smuggle weapons across the border.

Since the operations started on March 13 in Yüksekova, 130 terrorists have been killed by the military and police officers, while 150 hand-made explosives were dismantled, 57 ditches were filled and 110 barricades were removed.

Six soldiers were killed in a bomb attack on Saturday by PKK terrorists in the Nusaybin district of Mardin province, located in southeastern Turkey. Media reports said a bomb was detonated via remote control by members of the PKK terrorist organization, while soldiers were launching an operation into the building, which later collapsed as a result of the explosion. Twelve PKK terrorists were killed in southeastern provinces, the military said on Saturday. In a statement, the Turkish General Staff said that two PKK terrorists were "neutralized" in the Nusaybin district of Mardin on April 1, which increased the total number of the terrorists killed there to 150.

In addition, six terrorists were also killed in Şırnak where 136 have died so far, the statement said. In the Yüksekova district of Hakkari province, three terrorists were also killed during operations, bringing the total number killed so far to 113, the army said. In the Belen district of Hatay province, one PKK terrorist was killed and his weapons and documents were seized, the statement added.

Several other weapons and improvised explosive devices (IEDs) were also seized during the operations, the statement added.

A PKK/Democratic Union Party (PYD) terrorist who crossed the border from Syria to Şanlıurfa province surrendered to the authorities, the army said. Another PKK terrorist was held in Muş province, the statement added.

Tensions have been high in southeastern Turkey since the PKK – listed as a terrorist organization by the U.S. and the EU – ended a nearly two-year long ceasefire and resumed their 30-year armed campaign against Turkey in July 2015.

Since then, over 350 members of the security forces were killed and thousands of PKK terrorists were killed in operations across Turkey and Northern Iraq. Turkey designates the PYD – the Syrian affiliate of the PKK – as a terrorist group.
RELATED TOPICS