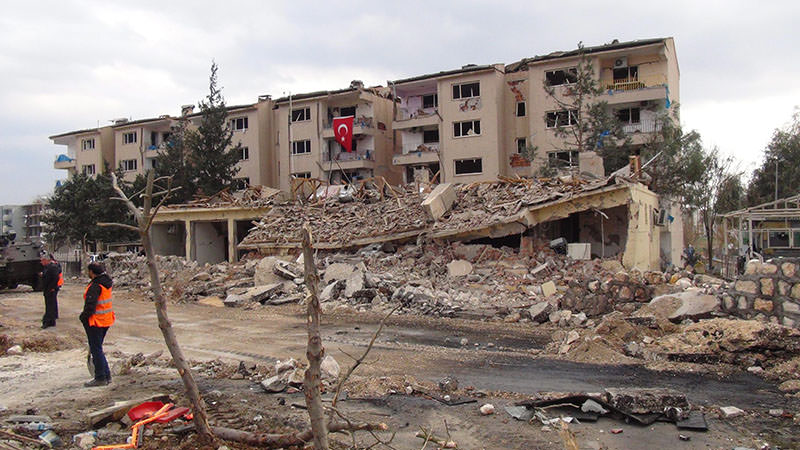 Security forces killed 18 PKK terrorists, including two alleged senior figures, who were trying to escape to the Syrian city of Qamishli late Sunday in a massive operation in the southeastern district of Nusaybin, Mardin.

The district poses a threat to security forces due to underground tunnels the PKK and its Syrian affiliate the Democratic Union Party's (PYD) People's Protection Units (YPG) use in the area to cross the border from Nusaybin to Qamishli and back. Security forces plant to target these tunnels, which are also used as supply routes.

A military source who spoke to Anadolu Agency (AA) on condition of anonymity due to restrictions on speaking to the media, said last month that the PYD and YPG smuggle weapons across three main points on the Syrian-Turkish border: Qamishli to Nusaybin, Kobani to Suruç and Afrin to the Amanos mountains.

The source said the YPG had been sent to fight alongside the PKK in Turkey following the end of fighting around the Syrian town of Kobani in September.

Security forces are continuing operations to purge southeastern provinces, including Nusaybin, of the PKK, which has been supported with recruitment and equipment by the PYD and YPG from across the border.

The PKK adopted an urban war strategy from the experience its militants gained while fighting alongside the YPG against DAESH in Kobani in 2014. In December, the PKK established the Civil Protection Units (YPS) by uniting the organization's urban youth wing, the Patriotic Revolutionary Youth Movement (YDG-H), with its militants operating in rural areas and the Self-Defense Units (ÖSB)— something interpreted by some as an indication the PKK was planning to move clashes with security forces from rural to urban areas in the southeast.

Senior PKK leader Cemil Bayık has said on radio appearances that militants were ordered to "burn and blast buildings" before evacuating the areas in and around Nusaybin. Bayık reportedly told the group "not to get in contact with locals who betrayed [the PKK]," and "evacuate the area while punishing those you have captured," along with "silencing" wounded terrorists to prevent information from passing to security forces.

He also ordered the complete destruction of civilian buildings and the setting of booby traps throughout the area. ISTANBUL