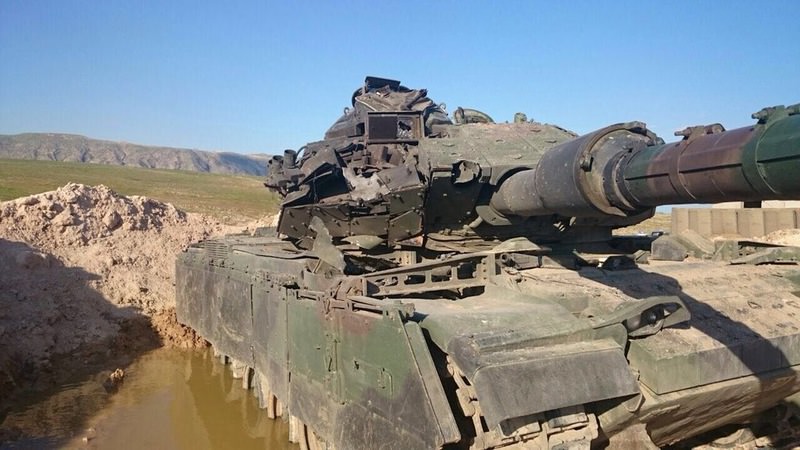 Turkey responded in kind on Monday to rocket attacks by DAESH firing at a border town, after five Syrians on Turkish side were killed and several others were injured on Monday and Tuesday

As the war next door threatens Turkey's security, Ankara seeks to curb the threat from the DAESH terrorist organization. Following a string of rocket attacks that have hit the border town of Kilis, the military shelled DAESH positions in Syria from where the rockets were fired. The death toll in Kilis from DEASH rockets comming from Syria on Monday rose to five – four Syrian orphans and a shepherd – while Turkish authorities promised retaliation.

Turkish authorities promised the public that the army would respond in kind to the attacks by shelling DAESH positions in Syria. Four rockets fired on Monday from a DAESH-controlled area along the border near the Turkish town of Kilis hit a hospital, an open field and an orphanage. The first rockets struck the hospital's oxygen storage unit and an olive grove, while the third hit and killed a local shepherd named Kamel Jarruh along with his 10 sheep that were also in the field. A Turkish student from a nearby school was also injured.

The fourth rocket struck a shelter for women and children - the majority of them Syrian children displaced by the war - being run by the local Fatih Sultan Mehmet Association. Three children died in the attack and one more child died of his injuries in hospital on Tuesday. Five other children were wounded. An official from the association said that their facilities have been running in that building for one year, hosting roughly 30 children and their mothers. Abdulgani Şevag told the Anadolu Agency (AA) that they were "deeply saddened by the deaths. These children came to Turkey two years ago. Their fathers were killed in Syria's war. They needed kindness and we were supporting them."

Şevag said that nine Syrian families were living in the building, and that three of the children injured in the attack remain in intensive care in a local hospital. The rocket penetrated the top floor of the building, leaving a 60-centimeter hole in its path before detonating on the first floor. The top floor was completely destroyed and the lower floors were heavily damaged. The deceased children were identified as Yasmin Suleiman, Tasmeen Hayru, Muhammad Hayru and Muqtaseem Hayru, and will be buried in either Kilis, or their hometown of Azaz in Syria.

Kilis has sought a Nobel Peace Prize for the "exemplary" coexistence of Syrians with local population. With a population of 129,000, Kilis is home to 120,000 Syrian refugees, and this number may increase as new refugees arrive from the war-torn country. Turkey currently hosts more than 2.7 million Syrians, more than other country in the region.

Kilis Governor Süleyman Tapsız told reporters on Monday that the rockets hitting Kilis are "hitting Turkey," noting that army border units have responded by destroying DAESH positions located where the rockets were fired. The governor denied claims that the army has not responded to the attacks. "Our citizens should rest assured that the army immediately took action and will destroy [DAESH] positions," he said. Tapsız said that the town of Kilis has demonstrated exemplary hospitality, tolerance, compassion and mercy for Syrians, and will "continue to keep this stance" in the wake of these attacks.

Three more rockets fired across the border hit Kilis yesterday. One projectile hit the roof of a house, causing a fire while others landed near a mosque and another fell into an empty section of a cemetery. Authorities said three people, including a Syrian national, were slightly injured. The attacks were the latest aggression taken against Kilis by DAESH, which is home to a vast number of Syrian refugees. Last week, rockets struck the town three days in a row, killing one person. Six people were also killed in Kilis in separate rocket attacks launched from Syria since March, according to media outlets.

Monday's attack brought the highest death toll seen on a single day and marks the first time that Syrian nationals have been killed in the town. Locals in Kilis have held protests and are calling for increased security measures to prevent further casualties. Lying close to the Syrian border, the town of Kilis has the most dense population compared to other towns on the Turkish-Syrian border, accounting for the higher number of casualties compared to those in other border towns in the past five years.

In accordance with Turkey's rules of engagement, the military responded by shelling DAESH positions in Syria for two hours. According to the Defense Ministry, Turkey's retaliation to gunfire from Syria has left 362 militants dead and 123 wounded since Jan. 1, due to a higher number of Katyusha-type rockets landing in Turkish territories. Last week, Prime Minister Ahmet Davutoğlu pledged that attacks from Syria will be retaliated against. "We will take all measures for the security of our citizens, and will soon leave the perpetrators of the attacks without the means to continue these attacks." Media outlets reported that Davutoğlu unveiled a new plan to drive DAESH away from the Turkish-Syrian border. Daily Sabah reported that the army is planning an intense artillery campaign targeting DAESH in al-Rai and al-Bab, after pinpointing DAESH positions "with the aid of local sources." DAESH is a major threat for both Syria and Turkey. The group has carried out several suicide bombings in Turkey in the last year alone, leaving dozens killed as members attempt to recruit new members of DAESH who then enter Syria via Turkey. DAESH has been listed as a terrorist organization by the Turkish government since 2013. And, since then, 3,300 suspects have been under investigation for links to DAESH and other extremist groups.

According to the Interior Ministry, 847 suspected DAESH members are currently in custody, most of them foreigners. The latest figures show some 27,000 people from more than 100 countries have been stopped while trying to travel to Syria to join the militants. DAESH controls a major swathe of land near the Turkish border and continues to seek territory in the area. In February, opposition parties in Syria reached a cease-fire agreement which did little to stop the conflict, leading to escalated fighting among regime forces, opposition wings and DAESH, undermining the truce agreement.