EU must not turn blind-eye to PYD's use of child soldiers, Scottish MEP says 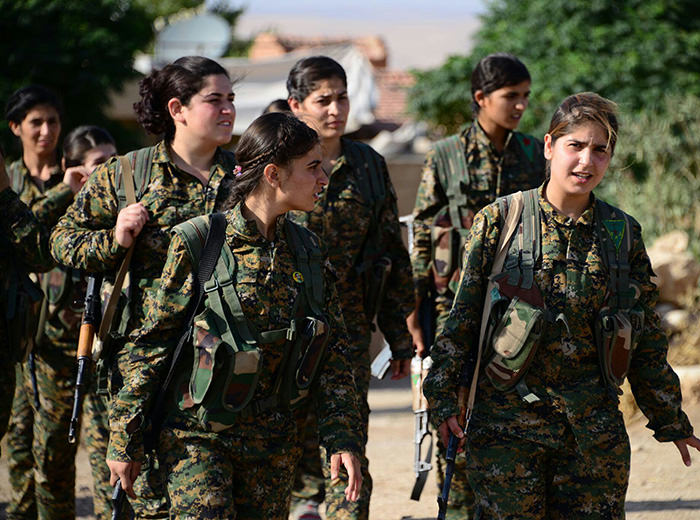 A Scottish member of the European Parliament condemned on Wednesday the recruitment of child soldiers by the PKK terrorist group's Syrian affiliate, the Democratic Union Party (PYD), whose armed wing is called the People's Protection Units (YPG).

In a statement, Alyn Smith called on the Kurdish militants to end the recruitment of child fighters in Syria. "War is no excuse for the Kurdish PYD to use underage soldiers on the battlefield," he said in a statement. "The EU is a values-based community and must not turn a blind eye to this, in as much as I have made clear we must condemn all violations regardless of their source," noted the statement. The Scottish National Party deputy, who sits on the European Parliament's foreign affairs committee, warned there "will be no peace without justice in Syria and the region," and called on the EU to support the vital work of agencies by documenting the abuse of human rights "including arbitrary detention, ethnic cleansing and the unacceptable use of child soldiers by Kurdish forces."

He added that areas under PYD control in Syria have seen them repress opposition groups through enforced disappearances. Earlier in 2016, the U.K.-based Syrian Network for Human Rights said the PYD was involved in ethnic cleansing, arbitrary arrests and forced conscription in Syria.

In a report in 2015, Amnesty International said the PYD carried out forced removals of Arab and Turkmen populations in northern Syria. The Amnesty report said that the crimes committed by the YPG amount to war crimes and that non-Kurdish people, mostly Turkmen and Arab which were living in villages in the de facto autonomous Kurdish administration, have been forced from their homes.

A report by the independent human rights observatory KurdWatch in 2015 titled, "Forcible recruitments and the deployment of child soldiers by the Democratic Union Party in Syria" reported that child recruits in the YPG, or in the affiliated Womens' Protection Units (YPJ) are as young as 12 years old.

"Along with the recruitment of child soldiers and adults, there has been an increase in the recruitment of minors as young as twelve over the past fourteen months. In some cases, the recruitment was forced; whereas sometimes the children and adolescents joined the People's Defense Units voluntarily, but against the expressed will of their parents. It is notable that many girls are among the minors who have been recruited. While adult conscripts are trained in Syria, the PYD typically seems to bring minors to Iraqi Kurdistan."

"The Kurdish armed group that controls territory in northern Syria, despite some progress, is still not meeting its commitment to demobilize child soldiers and to stop exploiting boys and girls under the age of 18 in combat," stated the HRW report.

The human rights watchdog contacted the families of seven confirmed cases for their report.

"My daughter went to school and was taken from there by a group of YPJ," a father of a 14-year-old girl said in the report, adding "We knew nothing about her until a YPJ commander called and informed us that she had joined the YPJ."