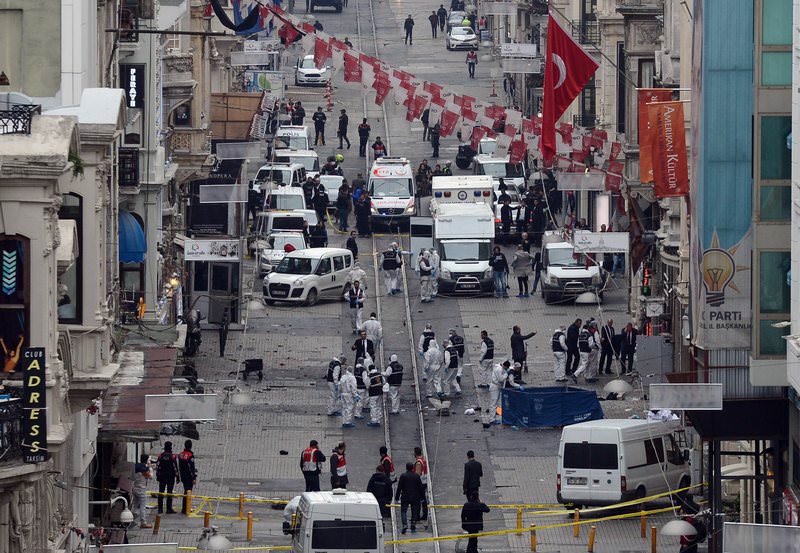 Israel's Counterterrorism Bureau said on Sunday Israeli citizens were not the main target of last month's suicide bombing that killed three Israelis and an Iranian and injured 36 in Istanbul.

According to a report in Israel's Haaretz daily, Israeli officials said that the suicide bomber aimed to damage tourism in Turkey in general and that there were no specific indications the target was Israelis specifically.

In the aftermath of the attack, media reports had indicated that the Israeli tourists killed in the attack were specially targeted.

The victims killed in the explosion on Istanbul's İstiklal Avenue were identified as Israeli citizens Simha Siman Demri, Yonathan Suher and Avraham Godman as well as Iranian Ali Reza Khalman.

The explosion was caused by a suicide bomber and claimed the lives of four people and injured more than 20 others, Istanbul's Governor Vasip Şahin said in a statement shortly after the bombing.

Out of the total injured 24 were foreigners, Şahin said.

DNA tests carried out after the suicide bombing proved that the bomber had links to Daesh.

Interior Minister Efkan Ala said in a press conference March 20 that evidence shows the suicide bomber was Mehmet Öztürk, who was born in 1992 in the southeastern province of Gaziantep.

Ala said the suspect is believed to have had ties with Daesh, but that he was not sought by police or gendarmerie units since he had no criminal record.

İstiklal Avenue is one of the busiest streets in Istanbul. A constant flow of thousands of people streams through the street, which is packed with shops and restaurants and is where many countries have their Istanbul consulate offices located or situated on nearby avenues.