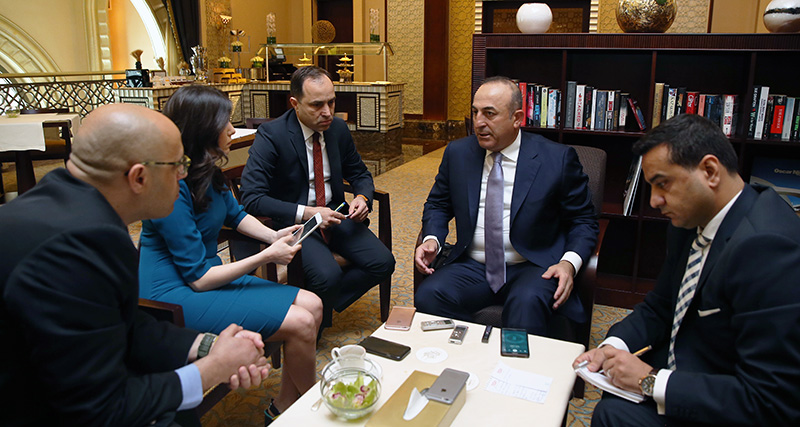 Speaking to reporters in Abu Dhabi on Monday, Çavuoğlu said that the HIMARS will be deployed in May and that NATO allies hope to assist moderate Syrian opposition groups on the ground with this artillery system.

D.S.: Would you comment on claims that the U.S. has placed HIMARS rockets on the Turkish border?

Mevlüt Çavuşoğlu: Our priority is to mop up the 98 kilometer Manbij area and eradicate DAESH. After accomplishing this, the safe zone will come into being on its own, eventually. Most recently, [U.S. president Barack] Obama said that he is not against the idea of a safe zone and Germany is on the same page with us about this issue as well. They are slow to understand that Turkey's theses, specifically regarding a safe zone and Syria, are correct; unable to see the truth because they are biased. In fact, this is one of the main problems about the West; they act like know-it-alls. This arrogant approach is one of the mistakes that Europe repeats the most. However, what we have always said about Syria has turned out to be true and, unfortunately, all of our warnings have proven to be on point.

To eradicate DAESH from this area, the opposition must be empowered. In fact, if the armed conflict in Syria stops, it could be possible to assign more forces to fight against DAESH. We have to support the moderate opposition. Our cannons have a range of 40 kilometers while American HIMARS rockets have a range of 90 kilometers. We have come to an agreement with the U.S. regarding the closing down of the Manbij area. Moreover, our strategy regarding this issue is set. With this strategy, more forces will be relocated for the fight against DAESH – new names are being chosen for this – the Syrian opposition will be supported by air and via the Turkish border. Hence, HIMERS rockets will arrive on the Turkish border in May according to this agreement and we will be able to hit DAESH targets more effectively. The moderate opposition will advance on the ground.

D.S.: Has there been any change in the U.S.'s perspective on the Democratic Union Party (PYD) since President Recep Tayyip Erdoğan's visit to Washington?

The Americans have learned the truth about the PYD and they are aware that the PYD is unreliable. However, they were always in search of alternatives in the fight against DAESH on the ground as they cannot send any troops to the region. We are warning of how dangerous it is to collaborate with the PKK, the PYD and the YPG [People's Protection Units]. For instance, the PYD opened an office in Moscow as they ideologically feel close to the Russians. Now, the Americans are working on creating a power against DAESH among different groups such as Turkmens, Arabs and other communities. Fundamentally, the U.S. has not entirely changed their politics regarding the PYD but they told us that they understand our concern about the YPG. [U.S. Secretary of State] John Kerry, himself told me that YPG is unreliable. We will see the change in their approach through their actions. We do not want the U.S. to team up with the PYD and YPG from now on because we proved to them that the PKK is no different from these groups with documents. We told them that those who orchestrated the Ankara attacks were trained in YPG camps and our intelligence office shared this information with the U.S. Everything is crystal clear about this issue.

D.S.: Senior PKK leader Cemil Bayık made a statement that there is direct contact between the U.S. and the PKK. Could you comment on this?

The Americans are who should comment on this statement. In fact, being in contact with the YPG in Syria is the same thing as being in contact with the PKK because there is no difference between the PKK and YPG. They are called the YPG in Syria, PKK in Turkey and Northern Iraq and PJAK [Party of Free Life of Kurdistan] in Iran, but they are the same terrorist organization. The YPG is numerous organizations originating from the Qandil Mountains. [PYD Co-Chair] Salih Muslim Muhammad was invited by Bashar Assad himself and Assad asked him to launch an attack on Turkey. This directly came from Syrian opposition coordinator Riyad Hijab, not me.

D.S.: How do you evaluate the conflict between the PYD and Syrian regime forces in Qamishli?

It is a theater, a sham. This is nothing more than a stage drama that is taking place according to the advice given by those who want to legalize the YPG. However, nobody is buying it.

D.S.: How would you evaluate the offers made by the U.S. and other countries about continuing the reconciliation process or parlaying with the PKK?

Instead of proposing to us to relaunch negotiations, those countries should consider whether they can guarantee the PKK will lay down its arms or not. We took these political risks so many times. We managed the reconciliation process, which was initiated by President Erdoğan sincerely. President Erdoğan then said there is no Kurdish issue in Turkey, but he is now saying that there is because we took many steps to solve this problem. While everybody was attacking us about the reconciliation process, we continue with it. However, there is no meaning going for it if the armed terrorist organization does not lay down its arms.
Last Update: Apr 26, 2016 8:38 am
RELATED TOPICS