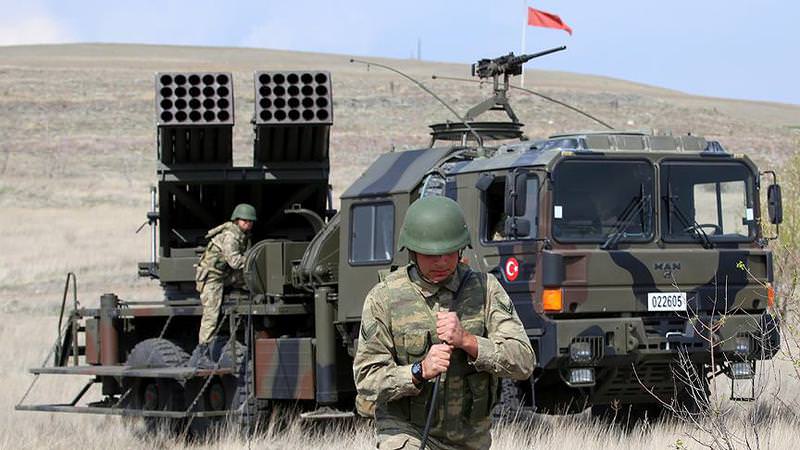 The Turkish Armed Forces (TSK) said on Monday that it struck DAESH targets in Syria using howitzers and rocket launchers, killing 34 terrorists about 12 kilometers south of the border.

Both strikes on DAESH occurred on Sunday, according to the statement.

The military has repeatedly retaliated fire at DAESH positions under its rules of engagement, but Ankara has said it needs greater support from Western allies, citing the difficulty of hitting moving targets with howitzers.

Speaking to reporters in Abu Dhabi on Monday, Foreign Minister Mevlüt Çavuşoğlu said that the United States will deploy high mobility rocket system (HIMARS) rocket launchers that will near a stretch of the border in May and that NATO allies hope to assist moderate Syrian opposition groups on the ground with this system.

"Our cannons have a range of 40 kilometers while U.S. HIMARS rockets have a range of 90 kilometers. We have come to an agreement with the U.S. regarding the closing down of the Manbij area. … Hence, HIMERS rockets will arrive on the Turkish border in May according to this agreement and we will be able to hit DAESH targets more effectively. The moderate opposition will advance on the ground."

A senior U.S. military official also confirmed the matter is being discussed, but declined to comment further.

Regarding the fight against DAESH, presidential spokesman İbrahim Kalın said on Monday last week that Turkey has deported 3,300 foreigners suspected of links to terrorist groups and another 41,000 foreign nationals have been barred from entering the country as part of the fight against the terrorist organization.

He said some 2,770 suspects, including 1,232 foreign nationals, have been caught in police sweeps and 954 are being prosecuted.