Footage from Syria captures Western forces, YPG militia fighting alongside each other 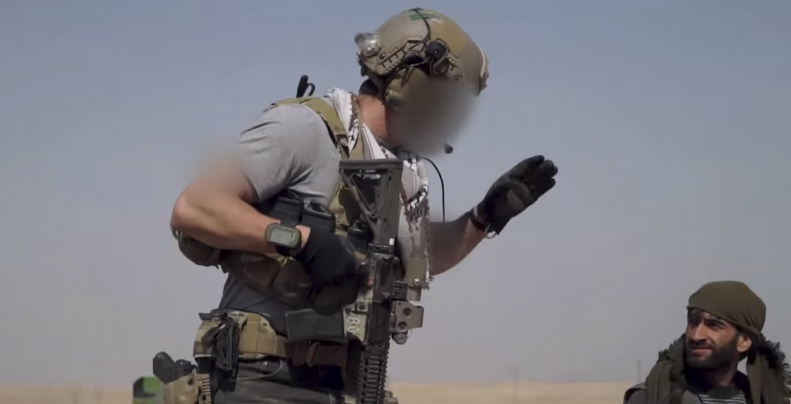 by Daily Sabah May 03, 2016 12:00 am
A newly released documentary sheds light on U.S. and Western cooperative efforts being made with the Syrian PKK-affiliate Democratic Union Party (PYD) and its People's Protection Units (YPG) militia in the fight against DAESH in Syria. The documentary shows the U.S. and other countries turning a blind eye to the close connection between the PYD and PKK, which is listed as a terrorist organization by the U.S. and EU.

In a video aired on April 23 on the channel France 24, a dozen special forces units from the U.S., the U.K. and France can be seen fighting alongside the Syrian Democratic Forces (SDF), which were dominated by YPG forces, in the town of Shaddadi in northeastern Syria.

While the faces of the special forces members were blurred in the video, the video indicates that their official role in Syria is to supervise anti-DAESH coalition airstrikes, prevent incidents of friendly fire and limit collateral damage.

The footage also shows Western special forces units destroying a bomb-laden DAESH vehicle destroyed with an FGM-148 Javelin anti-tank missile. It still remains a question whether the West will maintain its position regarding the PYD, continuing not to acknowledge a connection with the PKK. Ankara has repeatedly voiced its concern over the PYD's affiliation with the PKK and the sharing of logistical information and weaponry that goes on between the two organizations.

On many occasions, Ankara has assured that it has no problem with Kurds, but only with the PKK and the PYD, which it says aims to establish a de facto state along the Turkish border in northern Syria.

While Ankara asserts that the PYD is affiliated with the PKK, Washington does not share Ankara's concern. Bilateral relations took a hit after a statement from U.S. State Department spokesman John Kirby was released in early February, in which he stated that the U.S. does not consider the PYD or the YPG to be terrorist organizations.

The U.S. previously provided arms to the PYD in October, drawing heavy criticism from Ankara. Furthermore, the U.S. Air Force dropped 50 tons of arms and ammunition to the PYD in the northern Syrian province of Hasakah, with 112 pallets reportedly containing ammunition for M-16s and AK-47s.

Washington has maintained its policy on the PYD, claiming that the PYD supports the fight against DAESH fight on the ground in Syria. So far, the U.S. has not sided with Ankara on the issue, saying instead that the PYD is the only effective force in the anti-DAESH fight on the ground. Ankara counters this claim, saying that there can be no distinction made between a good terrorist organization and a bad one.
RELATED TOPICS